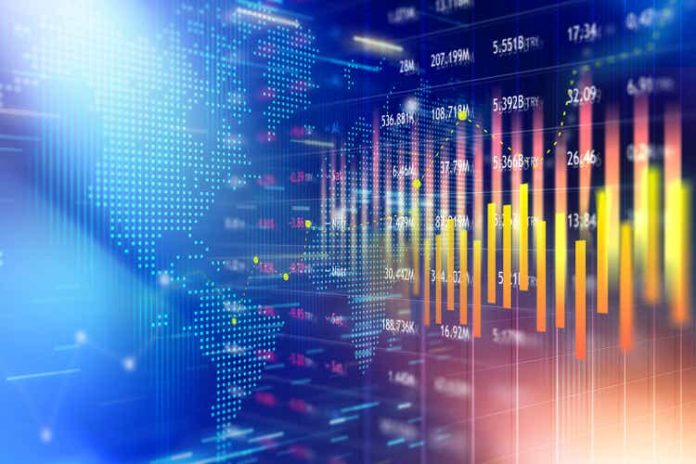 For 2022 the S&P 500 looks set for a decline of around 20%. Returns for many other international markets have also been negative during a year where valuations have compressed as the Fed and other central banks hiked rates aggressively against high inflation and other economic worries.

Looking towards 2023, the valuation of the S&P 500 is still relatively high compared to history. Quarterly earnings per share are currently $43 (see below), or $172 annualized, for a price to earnings ratio of 22x. That compares to a historical average of around 15x for the S&P 500.

The justification for a relatively high earnings multiple for the S&P 500 has been, in part, over recent years, that bond yields were so low that multiples for stocks should also inflate accordingly. However, bond yields have risen in 2022. The chart below shows the 10-year yield for U.S. (orange) and Eurozone (purple). Yields are now above 3% and may rise further in 2023. That is still relatively low by historical standards, but doesn’t offer much support for equity valuations over the medium-term above historically average levels.

Then there is significant recession risk in the U.S. Perhaps the best historical recession predictor has been the slope of the U.S. Treasury yield curve. Currently, the U.S. yield curve is the most inverted it has been during the last decade, with 2 year rates well above 10 year rates. This has historically implied a recession is coming on a 12-18 month view, and this signal first came in spring 2022, suggesting that a recession could well emerge in mid-2023.

It is not hard to come up with a scenario where either due to lower earnings because of a recession, or compressed valuations as rates remain elevated, the U.S. delivers another year of negative returns.

Looking overseas, there are similar risks to earnings. However, valuations are more supportive. The U.S. is one market that still appears relatively expensive in absolute terms and compared to its own history. In contrast, European valuations are a lot less demanding, though of course inflation is running at higher levels than in the U.S.

More interesting idea for 2023 is perhaps China. In 2022 there were several risks for U.S. investors in China. These were the risks, including accounting concerns, forcing Chinese companies to delist from U.S. exchanges. Secondly, Chinese zero covid policies continuing to hamper economic growth and, thirdly, the risk of Chinese policies hindering the growth of a market economy.

Now, two of those three risks have eased. China has rapidly scrapped many covid policies over recent weeks, and the U.S. accounting watchdog has received the information it needs to review the accounts of Chinese companies. It’s not a clean bill of health on accounting yet, but it’s encouraging.

So even though economic risks remain from policy decisions (as they always have), China has recently become a lot more investable for U.S. investors.

At the same time, China trades at a relatively low valuation compared to its own history. For example, Research Affiliates calculate a CAPE (cyclically adjusted PE) of under 10x for Chinese stocks currently, compared to over 20x for U.S. stocks. So it’s quite possible that we see another negative year for U.S. stocks, but after a similarly bad 2022, the prospects for investing in China may be more favorable.

Of course, the next level is to assess individual Chinese stocks, but it seems possible that a broad investment in an ETF such as FXI (iShares China Large-Cap ETF) may offer a simple way to gain exposure to China in 2023, which may outperform U.S. markets, in aggregate. The ETF holds 50 of Chinese large caps such as Alibaba and Tencent, with an expense ratio of 0.75%, as such it’s a reasonable proxy for Chinese large caps and offers some diversification, which is helpful if you’re looking to play this macro trend in the Chinese market.

News - September 7, 2022 0
This year's Apple event is over, and the tech giant has finally lifted the lid on some of its most exciting products. Between revamped...

Is the global economy heading for recession?

News - May 20, 2022 0
If Leo Tolstoy were writing about today’s business conditions, he might have noted that happy economies are all alike but every unhappy economy is...

The return of inflation: crunch time for the European Central Bank

News - December 14, 2021 0
As Christine Lagarde unveiled plans last week to redesign euro banknotes for the first time since their launch two decades ago, the European Central...

News - February 15, 2022 0
According to eMarketer, Japan and Korea’s e-commerce markets were estimated at $144 billion and $121 billion, respectively, in 2021. Despite the large e-commerce market...
© 2022 Venture Current is a Flag Media LLC Publication. All Rights Reserved.
VC is part of the FLAG Token rewards network. Clients and partners can use FLAG Tokens for VC products and services.
VC runs 'Automatic' software. Stories posted here come from generic-topic Google news RSS feeds as well as client and partner-approved content.
If a story appears on this page that needs to be deleted due to licensing issues, please message us immediately so we can help you.