With recent positive developments in the cryptocurrency sector, it’s tempting for investors to pick out individual cryptos for upside success. While bullish sentiment has undeniably entered the space – with the total market capitalization of all digital assets rising conspicuously above the critical $1 trillion mark – market participants must stay objective.

While every boom-bust cycle features its own nuances, no asset sector rises or plunges linearly. Indeed, bullish cycles often include healthy short-term corrections. That may be what’s happening with cryptos right now.

However, keep in mind the obvious point: Sensing capitulation doesn’t equate to an actual bottoming. Further, since the underlying fundamentals – high inflation and a Federal Reserve likely to aggressively push for monetary tightening – are troubling for cryptos, investors have plenty of reason for caution.

This isn’t meant to scare people. Rather, it’s better to prepare for the worst rather than be caught off guard. With that, here are the cryptos to watch this week.

Bitcoin (BTC-USD) has recently benefitted from encouraging headlines when asset manager BlackRock (NYSE:BLK) announced the launch of a private trust. This financial vehicle will hold BTC and seek to track the asset’s performance. Further, Coinbase (NASDAQ:COIN) will serve as the trust’s custodian.

Notably, in March of this year, “BlackRock Chairman and CEO Larry Fink wrote in his letter to shareholders that the Ukraine-Russia war could potentially accelerate the use of digital currencies,” per Yahoo Finance. Over the trailing month, BTC has gained about 19%. Still, it’s also worth mentioning that on a year-to-date basis, BTC is down 55%.

Investors should recognize that 56% of BTC stakeholders are in the money at the current price. Therefore, as the digital asset rises, you should find that this metric expands favorably.

Nevertheless, you should also be mindful that any shock events – equity weakness, poor fundamental reports – could send BTC down quickly. Unfortunately, you simply can’t relax in this market.

Ethereum (ETH-USD) is on the verge of a major breakthrough ahead of the Merge. Essentially, developers are running tests to ensure that the underlying network can handle the transition to proof of stake.

Scheduled to execute in September, Ethereum’s pivot to the proof-of-stake consensus mechanism should make its blockchain run faster and with more energy efficiency. One of the main criticisms of cryptos has been that the underlying mining process uses too much electricity. Per Columbia Climate School, Bitcoin mining “consumes an estimated 150 terawatt-hours of electricity annually — more than the entire country of Argentina, population 45 million.”

Nevertheless, investors should be aware of the buy the rumor, sell the news phenomenon. Put another way, if everyone bets on the same horse, the subsequent rewards will be extremely limited.

With the advent of specialized cryptos such as Tether (USDT-USD) – a stablecoin pegged to the dollar – blockchain investors enjoy options. For instance, decentralized applications (dapps) enable everyday retail investors to accrue rewards (interest) on their digital assets. One popular mechanism for passive income involves lending stablecoins like USDT for regular interest payments.

With rates that can go into double digits, you can’t find a similar corresponding example in the fiat currency space. That’s the beauty of cryptos. However, the ugly side of virtual currencies is that at any moment, they can implode. As the recent disaster involving Luna Classic (LUNC-USD) demonstrated, the sector can be brutal and capricious.

To be clear, I’m not drawing a correlation between Tether and Terra Luna. One remains a viable project while the other struggles for a mere semblance of credibility.

Still, I firmly believe the wise approach is to mitigate your exposure to all stablecoins. Have some fun money in USDT if you want – I do – but leave your core funds in cash.

The recent enthusiasm surrounding Cardano stems from its leadership in proof-of-stake protocols. According to the project’s website, its blockchain platform is “the first to be founded on peer-reviewed research and developed through evidence-based methods.”

One of the implications with Ethereum moving over to the staking-based approach is that if the venture fails, Cardano and others may be able to pick up the pieces. According to the Blockchain Council, while Ethereum presents myriad opportunities, several challenges exist. These include matters such as building future-proofing architecture and the rising dilemma of network backlogs.

Still, traders appear to have shifted away from the above implications. Instead, they seem to be buying the rumor and selling the news. According to liquidity data from Coinpaprika.com, asks (sell orders) have been outpacing bids (buy orders). 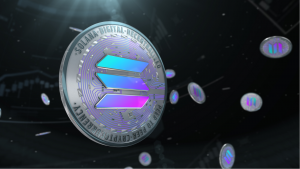 Another name among alternative cryptos that benefits from the Ethereum spotlight is Solana (SOL-USD). As an Ethereum competitor, the bullishness in SOL makes perfect sense.

Solana offers a deal many developers couldn’t refuse: speed, scalability and security. As well, the platform ensures that transaction fees remain less than a penny for both developers and users.

That’s the good news. Unfortunately with cryptos, the sector’s ebb and flow doesn’t always follow logic. Ominously, some technical analysts have called for a 35% correction in the SOL price.

Interestingly, as with Cardano, Solana’s order book showed asks outweighing bids over the weekend. Therefore, prospective investors should watch SOL carefully. It’s possible that a discount could be up ahead. 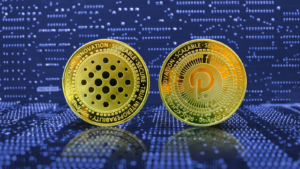 For those who have been following the latest iteration of cryptos, Polkadot (DOT-USD) will ring familiar. In early 2021, Forbes wrote an article about Polkadot, declaring it to be an Ethereum killer. According to Coinspeaker.com, Polkadot commands several advantages over other blockchain-based projects. These include interoperability, scalability and the ability to build custom blockchains. Combined with rising Ethereum transaction fees (called gas), many developers saw a home in Polkadot.

Another distinct factor that makes the DOT network stand out is sharding. Per Coinspeaker.com, “In a classic blockchain, validators have to validate every single transaction. However, the validating work gets distributed in Polkadot, leaving each validator to focus on a set of parachains rather than all of them. In this context, parachains are referred to as shards.”

However, as with the other cryptos above, traders appear to be selling the news. As I write this, Polkadot’s order book shows that asks have outweighed bids. Therefore, some corrective action this week wouldn’t be out of the question.

While “serious” investors often dismiss Shiba Inu (SHIB-USD) as a joke, its recent momentum has been no laughing matter. Over the trailing month, SHIB has gained more than 10%. Plus, at time of writing, Shiba is the No. 12 largest virtual currency.

Indeed, chatter on social media is focusing on how SHIB displaced Avalanche (AVAX-USD) for the honor. Considering that many investors consider AVAX a serious crypto project, Shiba Inu’s achievement is no small matter. Still, it begs the question: How did SHIB gain so much momentum?

In my view, some benefits exist for SHIB not fundamentally correlating with other mainstream cryptos. For instance, while it’s nice that blockchain projects promote ambitious targets, should they fail to realize them, they risk a market correction. However, Shiba Inu isn’t attempting to eradicate global hunger or cure cancer. Rather, it’s a fun platform for speculation.

It’s silly but it works. And that’s the odd beauty of Shiba Inu.

On the date of publication, Josh Enomoto held a LONG position in BTC, ETH, USDT and ADA. The opinions expressed in this article are those of the writer, subject to the InvestorPlace.com Publishing Guidelines.

A former senior business analyst for Sony Electronics, Josh Enomoto has helped broker major contracts with Fortune Global 500 companies. Over the past several years, he has delivered unique, critical insights for the investment markets, as well as various other industries including legal, construction management, and healthcare.

EU rules: What makes the USB-C port the gold standard of charging ports?

News - December 15, 2021 0
Qantas has become the latest airline to experience a slowdown in bookings, particularly for international routes, due to the emergence of the Omicron variant...

News - September 13, 2022 0
The sharp drop in crude oil prices last week on news that China had extended a Covid-19 lockdown in Chengdu,...

Scars of war seem to be everywhere in Ukraine after 3 months – KTSM...

News - May 25, 2022 0
KRAMATORSK, Ukraine (AP) — Piano music wafted from an apartment block on a recent spring evening in Kramatorsk, blending with distant artillery fire for...

News - April 4, 2022 0
Channel 4 is to be sold by the government ahead of the next general election after ministers decided privatisation was the best way to...
© 2021 Flag Media Group. All Rights Reserved. ** TELL YOUR STORY **
We do not generate news. This digital publication and all Flag Media publications curate Google news using Google RSS Feeds.
Please advise if any posts need to be removed for licensing/copyright issues.