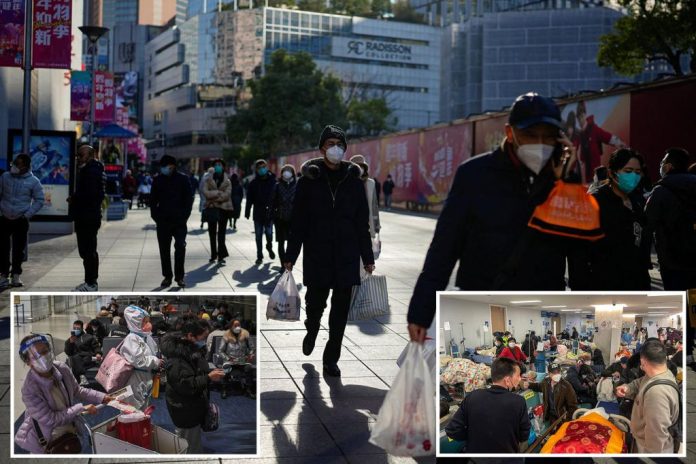 A senior doctor at one of Shanghai’s top hospitals is sounding the alarm on surging COVID-19 cases in China — as he estimates that up to 70% of the city’s population has been infected.

Chen Erzhen, the vice president of Ruijin Hospital and a member of Shanghai’s COVID expert advisory panel, estimates at least 70% of the megacity’s 25 million residents have been infected following the easing of the country’s “zero-COVID” policies.

“Now the spread of the epidemic in Shanghai is very wide, and it may have reached 70 percent of the population, which is 20 to 30 times more than (in April and May),” he told Dajiangdong Studio, which is owned by the state-run People’s Daily.

As a result, he warned, hospitals in China are being stretched to their limits.

Erzhen said his hospital has seen a stunning 1,600 emergency admissions each day — twice as many as before restrictions were lifted — with eight in 10 being COVID patients.

“More than 100 ambulances arrive at the hospital every day,” the doctor said, adding that half were at-risk patients over the age of 65.

Sobering footage filmed Monday at Zhongshang Hospital in Shanghai shows patients placed on beds outside the emergency department entrance as it struggled to cope with rising COVID-19 infections.

Other Chinese hospitals have even been forced to turn ambulances and critically ill patients away.

Emergency rooms in smaller cities and towns outside Bejing are teeming with sick patients, slumped on benches and lying on the floor due to a lack of beds.

Relatives waiting outside Yinheyuan Funeral Home in Guangzhou last Thursday told Radio Free Asia that they had to leave their deceased family member’s body at home to stand in line — because the funeral home was not reachable by phone.

Other footage from Babaoshan Funeral Home in Beijing shows lines of cars marked “Jing Funeral” waiting outside an entrance.

The funeral parlor has been forced to carry out cremations 24 hours a day to keep up with a rise in demand, Radio Free Asia reported.

The demonstrations marked the largest show of public dissent against the ruling Communist Party in more than 30 years.

Under the ultra-strict rules, a single positive case could trigger widespread, lengthy lockdowns of entire cities.

Officials also erected massive barriers and fencing around entire neighborhoods to prevent the spread of the virus.

Residents who tested positive for COVID-19 could also be forced into a government-supervised quarantine facility.

With the reversal of zero-COVID and the spread of the Omicron variant, infections in China’s biggest city, Shanghai, are expected to peak early this year.

Chinese health officials have suggested that other major cities like Beijing, Tianjin, Chongqing and Guangzhou have already experienced their peak.

Chinese officials have also warned a wave may hit more rural areas as millions of people plan to travel back to their hometowns to celebrate the week-long Lunar New Year starting on Jan. 22.

Jiao Yahui, an official with the National Health Commission, said the holiday would be an “enormous challenge” since people had not been returning home to celebrate since before the pandemic.

“What we are most worried about is in the past three years, nobody has returned home for Lunar New Year but they finally can this year,” said Jiao.

“As a result, there may be a retaliatory surge of urban residents into the countryside to visit their relatives, so we are even more worried about the rural epidemic.”

Over a dozen countries have imposed COVID testing requirements on passengers coming in from China, including the US, which will implement the rule beginning Jan. 5.

News - June 11, 2022 0
"He said he was more than disappointed at the policy," The Times reported, quoting an anonymous source. "He said he thinks the government's whole...

OpenAI Releases An Improved Version Of Its Codex AI Model

News - September 6, 2022 0
TAIPEI (Reuters) -Taiwan's government expressed its condolences to China on Tuesday for an earthquake in Sichuan province and said it was ready to send...
© 2022 Venture Current is a Flag Media LLC Publication. All Rights Reserved.
VC is part of the FLAG Token rewards network. Clients and partners can use FLAG Tokens for VC products and services.
VC runs 'Automatic' software. Stories posted here come from generic-topic Google news RSS feeds as well as client and partner-approved content.
If a story appears on this page that needs to be deleted due to licensing issues, please message us immediately so we can help you.