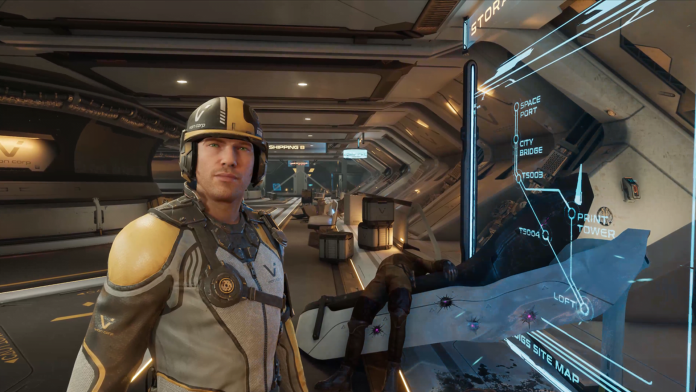 Is Hubris the Crysis of VR shooters? We test whether the shootouts against an idyllic backdrop also offer great gameplay.

The virtual reality shooter Hubris is supposed to finally make use of the graphical capabilities of modern VR PCs.After an emergency landing on a hostile planet, you’ll go in search of a missing agent. On the largely linear path, you’ll disassemble aliens and mutated astronauts with your multifunctional blaster.

In addition, you also master puzzles, platforming, climbing, and swimming sequences collecting resources and improving your firearm. In the demo of the VR game, all of this was still quite bumpy. Whether the full version has more to offer than pretty panoramas, I’ll check in the test.

Hubris review in a nutshell

Hubris seems uninspired all around – from monotonous shooting with impractical weapons to the bumpy handling when climbing and crafting. Only the pretty graphics and a well-done swim control gave me some nice VR moments.

Hubris is suitable for you if …

Hubris is less suitable for you if …

But can it give Crysis a run?

The success of Meta Quest 2 (review) has also left a clear mark on the PC VR world. Games like Ultrawings 2 sell around ten times as often on the mobile system. So, it’s no wonder that fast VR computers hardly got any graphically complex games this year.

Cyborn from Antwerp, Belgium, wants to remedy the situation. The studio’s first major virtual reality shooter, Hubris, will initially focus entirely on PC VR, and should finally put gamers back in picturesque settings. Conversions for other platforms such as Quest 2 and Playstation VR 2 are not planned until 2023. So far, the indie studio has primarily worked on film animations, 3D scanning, and smaller apps.

The rugged planet in the Twin Planets system actually offers a great panorama when I arrive. Its idyllic reflecting lakes are framed by picturesque angular stone columns. On the horizon, gigantic terraforming machines are enthroned, slowly transforming the actually hostile celestial body into a habitable world.

But the planetary dream does not come true for the human settlers for now. After a raid and several mysterious deaths, a large part of the sealed-off spaceport is under quarantine. So I have to use a few tricks to get past them.

As a newly recruited agent of the so-called “Order of Objectivity”, I also try to uncover the mystery surrounding the missing agent Cyanha.

On the way to her, I defend myself with firearms against the aggressive animal world and apparently mutated “Uron” invaders. I had expected that the hopping alien fleas would only attack me with simple standard routines. However, the enemies in protective suits don’t exactly prove to be intelligent beasts either and hardly ever take cover.

On the other hand, they advance steadily and surprise me from the side when I’m crouching in a seemingly safe corner. Overall, the enemies in Hubris are much too timid. Even giant drones don’t pose a real threat on the highest difficulty level. Occasionally, the monotony is broken up by guns, which I sneak up on via the flank. 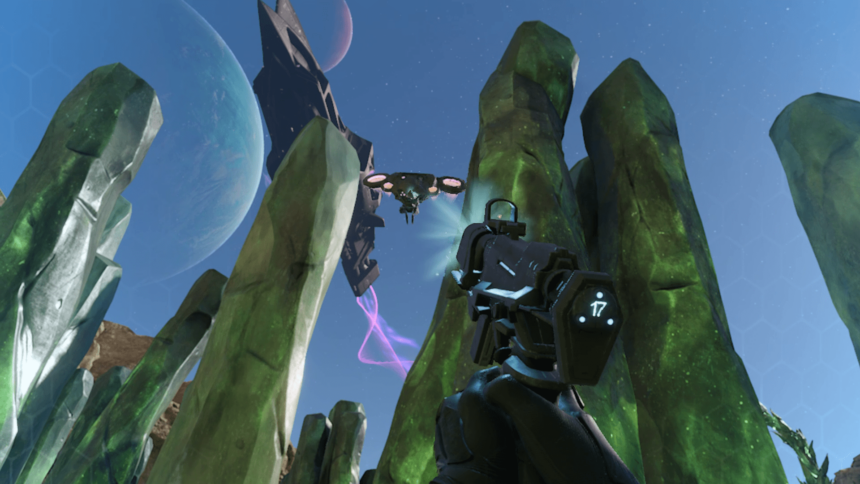 Even between twisted rock needles, there is not the tension of a Farpoint.| Image: Cyborn / MIXED

The arsenal of weapons also proves a disappointment. The shotgun blast of my upgradeable multifunctional cannon has too short a range even in close combat. The use as a submachine gun lacks penetrating power. In the end, I usually just use the standard pistol, which, like the other variants, can be improved a bit in terms of status values.

Hubris isn’t just a shooter, though. It mixes the gunfights with numerous jumping and climbing missions, where the team’s lack of experience is clearly noticeable. Even when I catch a stone platform in time, the virtual hands often don’t reliably grab the ledge. As a result, I find myself falling into the abyss again and again.

When climbing ropes or scaffolding in the mine complex, I frequently get my head caught in the scenery outside the map, which ends in a blackout or another fall into the depths.

If you have the option, avoid playing with the index controllers if possible. The more sensitive sticks of Meta’s Touch controllers make the balancing act noticeably easier and more bearable, so I switched from the Valve Index (review) to the Rift S during the adventure.

The swimming controls are much more successful. With intuitive arm movements, I cross idyllic lakes or even dive into a flooded reactor. In the latter, I replace some fuses and escape again in time so that gigantic rotors don’t shred me. 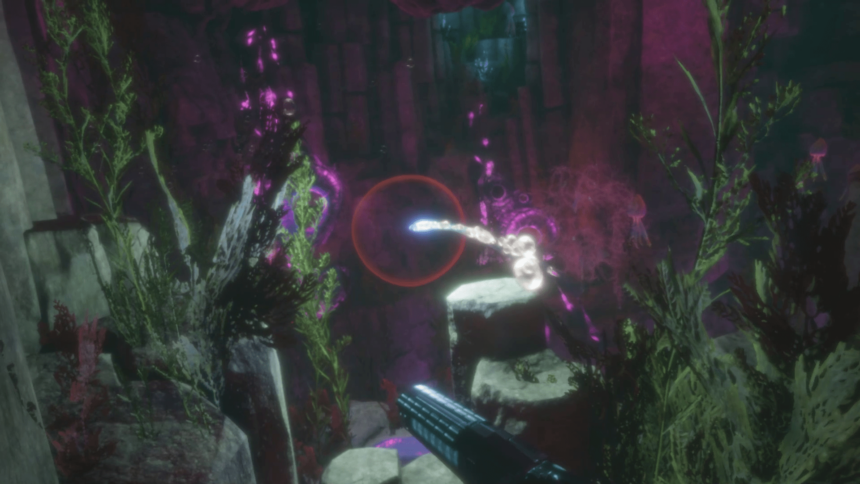 The upgraded harpoon is one of the more fun weapons. Its remote-controlled projectile can be steered directly into squids. | Image: Cyborn / MIXED

Sometimes, atmospheric moments occur. This also applies to exploration tours at the edge of the linear levels. If I brave the balancing act over a pipe system into a chamber at the edge, rare resources reward me for my spirit of discovery.

However, it is a pity that the subsequent crafting at the 3D printer is unsatisfactory. Unloading various resources takes what feels like an eternity, especially since the rewards are limited. The inventory closes automatically again and again, which is much less practical than in Into The Radius (review) or The Walking Dead: Saints & Sinners – Chapter 2: Retribution (review).

As already mentioned, improved weapons hardly offer any advantage. At least the production of remedies or batteries for small environmental puzzles is a bit more entertaining. Among other things, they help when I guide an injured companion past floating mines.

Movable cranes and containers also are helpful when dangerous passages need to be blocked. Machine puzzles here, however, require nowhere near as complex solutions as in the adventure classic Lone Echo 2.

The story about the mysterious attack quietly rumbles along during the approximately five hours of gameplay. The narrative can’t build up any tension, but thanks to the passable English dubbing I don’t feel lonely on the planetary trip. I meet helpers like the terraforming expert DuWack, who accompanies me on my search for Cyanha. 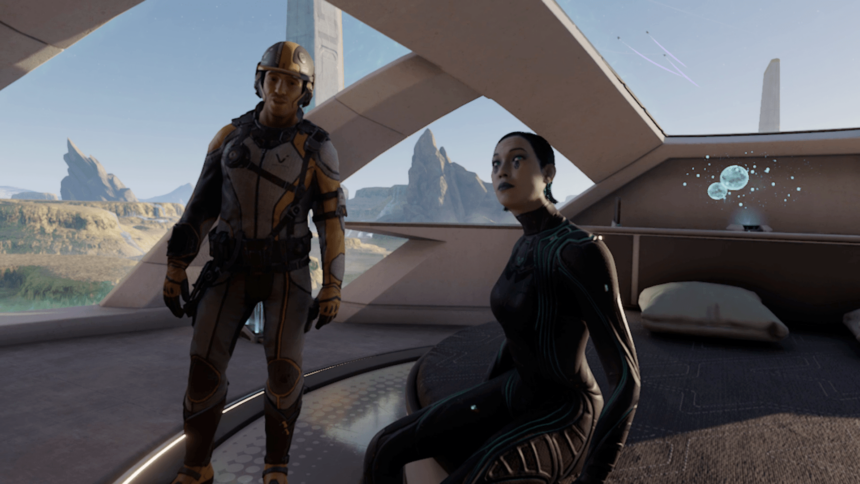 Time to take a deep breath in the airy loft. | Image: Cyborn / MIXED

My pilot Lucia is constantly contacting me via drone. Here and there she comments on findings, such as strangely disfigured enemies, or she gives me hints on how to solve puzzles.

The technical implementation turns out to be a double-edged sword. On the one hand, the Unreal Engine conjures idyllic landscapes out of the graphics chip. The geometric rock formations should especially delight fans of canyons. In between, the pretty reflecting waves of the ponds invite you to take a dive. The in-house motion capturing of the cutscenes is also impressive.

In contrast to this are the sparsely furnished interiors of the stations, whose angular set pieces often repeat themselves. Even enemies in suits or attacking squids have plain character models, especially compared to Half-Life: Alyx or the gigantic spiders in Farpoint.

Although the scenery is not consistently convincing, the game demands fast hardware. My GeForce RTX 2080 Ti manages the highest setting without problems, but only with the old Rift S and without supersampling. With only 80 Hertz refresh rate and a low resolution of 1,280 x 1,440 pixels, it can render demanding games smoothly.

You need at least a mid-range PC

When using Valve Index, I had to dial down the internal game resolution significantly, which resulted in a blurrier picture. Deactivating various effects hardly helped the performance. I also had a few crashes, thanks to which I had to deal with annoying jump passages several times. 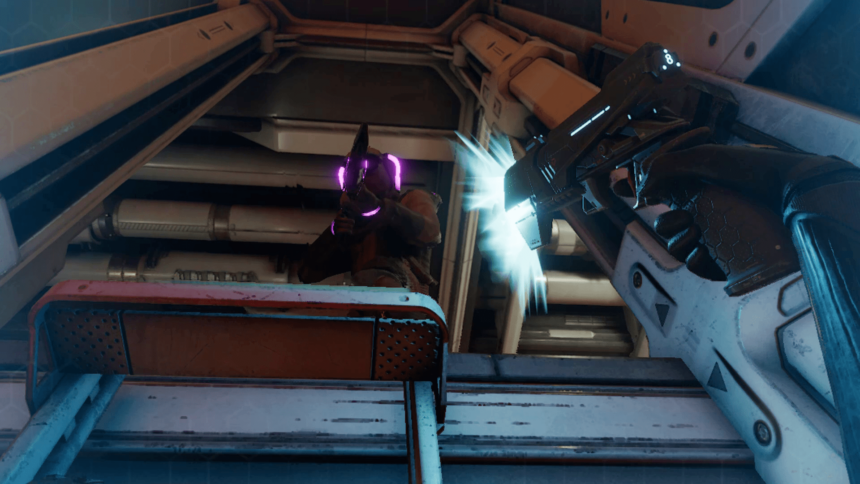 Hubris is a comfortable VR game. My stomach normally reacts quite sensitively to jump sequences (see also our article on motion sickness). In Hubris, they didn’t bother me at all.

You can set comfort settings like a vignette, rotation angles for optional snap turns, or an orientation according to the head or hand, respectively. Teleport is not available. Sensitive players can at least reduce the running speed.

Hubris is a boring shooter with great graphics. We get some pretty panoramas that finally utilize our graphics cards. However, the monotonous firefights against completely mindless enemies hardly kept me engaged.

The jumping passages didn’t get on my nerves as much as I thought they would, but many things still seem immature. Be it the buggy climbing, the impractical weapons or the cumbersome crafting, important functions don’t work as smoothly as in the competition and make for sluggish gameplay.

Hubris’ biggest problem is the lack of ideas and personality. Lies Beneath has a cool comic book style, Stormland has fluid locomotion, Farpoint has tricky giant spiders, and Fracked has a fast-paced cover mechanic. In comparison, Hubris feels like an uninspired standard shooter. Even the half-baked Bonelab (review) entertained me better this year, offering cooler physics gimmicks.

You can buy Hubris here:

Note: Links to online stores in articles can be so-called affiliate links. If you buy through this link, MIXED receives a commission from the provider. For you the price does not change.

News - April 11, 2022 0
A house under construction in Antioch, California in March. Rising mortgage rates threaten home affordability. Bloomberg The market is finally getting the message that the era...

Biden’s AZ border wall move could be to ‘help one of their own’ win...

News - July 29, 2022 0
NEWYou can now listen to Fox News articles! The timing of the Biden administration's announcement to complete open segments of the border wall...

News - April 5, 2022 0
BRUSSELS — The European Union’s executive branch has proposed a ban on coal imports from Russia in what would be the first sanctions targeting...

News - January 30, 2023 0
© 2022 Venture Current is a Flag Media LLC Publication. All Rights Reserved.
VC is part of the FLAG Token rewards network. Clients and partners can use FLAG Tokens for VC products and services.
VC runs 'Automatic' software. Stories posted here come from generic-topic Google news RSS feeds as well as client and partner-approved content.
If a story appears on this page that needs to be deleted due to licensing issues, please message us immediately so we can help you.