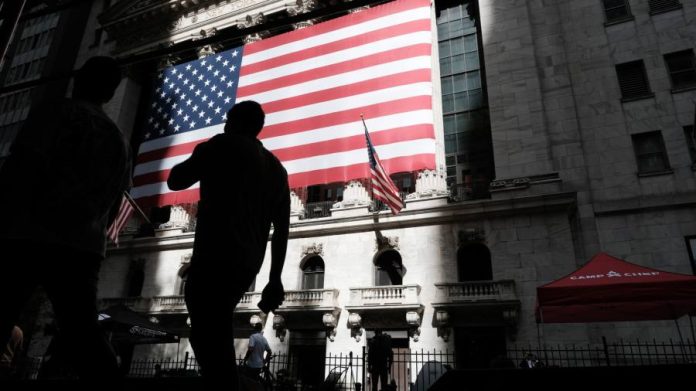 What goes down, must go up — and in the next year, no less. At least, that’s a belief that would justify this year’s standing as the second-best year on record for inflows into stock-focused exchange traded funds.

Even as equities endured their worst performance since the 2008 financial crisis with a one-fifth fall for US blue-chips, investors have poured some $510bn into equity ETFs, according to Bank of America data. The biggest flows have been directed at the giant index trackers and the passive funds that invest in large-cap stocks which have borne the brunt of this year’s losses.

The bulls have a point since stocks on average gain 20 per cent in the 12 months after hitting a bear market bottom, according to broker LPL Financial. LPL adds that, at nearly one year old, the current bear market is now longer than the average since the second world war of 11 months. There are also only four occasions that the S&P 500 has suffered back-to-back calendar-year losses in a history stretching back almost a century.

But at the risk of sobering any year-end revels, what if 2023 marks a fifth time unlucky and this isn’t yet the bottom?

In an interview on the All-in podcast, Tesla founder Elon Musk mused last week about the potential for “mass panic” among investors. He cautioned listeners against using shares as loan collateral in a volatile market and advised keeping cash to hand.

“You can get some pretty extreme things happening in a down market,” the entrepreneur added as he predicted a “best guess” of stormy times for another 18 months. It is doubtless particularly easy to be gloomy when your company’s stock has plunged more than two-thirds in a year and you’re facing a $44bn bill for the controversial takeover of Twitter.

Still, Musk is far from the only one jittery about the outlook, especially given that central bankers have made it clear they will continue to fight inflation with higher interest rates in spite of forecasts for — at best — an economic slowdown.

There’s been a lot of focus this year on the potential for blow-ups in the bond world, either from heavy borrowers collapsing as rates rise, or because some largely overlooked corner unexpectedly gums up the wider system, as happened to UK gilts, or government bonds, in September, bringing down the country’s prime minister in the process. But shaken stock markets inflict their own sort of pain too.

The uncertainty is reflected in a wide spread of analyst forecasts for 2023. A Reuters poll of 41 predictions at the end of November showed a median expectation of the S&P finishing at 4,200, about 3 per cent above the levels at the time, and up roughly a tenth from current levels. But the poll also recorded forecasts running almost 20 per cent either side of that.

While classic measures of expected volatility like the Vix index are not flashing red today, others show a more shaky environment. Before this week, the S&P 500 has seen an all-time record of 16 Fridays this year where it closed at least 1 per cent lower, according to a count kept by Bespoke Investment Group. It has also enjoyed 15 week-closes where it has gained at least that much — a frequency not reached since the irrational exuberance of 1999.

Fridays matter because they can set the mood into the next week, barring big weekend events, and because they’re typically days for taking profits and trimming risk, not for making bold bets.

History also provides a reminder that it can take a long time for equity markets to recover from the sort of blows suffered this year. If the doomsters are correct, then a gloomy scenario may look more like the dotcom aftermath.

After the bursting of that bubble, it took seven years for the S&P 500 to regain and then surpass the highs it hit in that boom. Just reaching the bottom took a while too — the S&P’s 49 per cent slide from peak to trough took two-and-a-half years as the hype faded around tech stock valuations.

How close are current market conditions to those times? The cyclically adjusted price/earnings ratio popularised by Yale University’s Robert Shiller is one reputable benchmark. The measure averages inflation-adjusted earnings over 10 years to smooth out the economic cycle.

The current Barclays Cape ratio for US stocks of 29, based on MSCI indices, is well below the peak of 47 hit in the dotcom bubble madness and has dropped from a peak of 39 a year ago. However, it is still well above the long-running average for the indicator of about 16. It is also still above the 25 level of January 1 in 2008 before the financial crisis led to a 38 per cent annual drop in the S&P 500.

The optimistic ETF backers may yet have got it right, of course. An end to the war in Ukraine or a smooth post-pandemic reopening of China’s economy could improve the outlook dramatically. It is always worth considering downside scenarios though — not least since the biggest-ever ETF inflows were in 2021, and those bets are yet to come good.

News - December 19, 2021 0
Nations across Europe moved to reimpose tougher measures to stem a new wave of Covid infections spurred by the highly transmissible Omicron variant, with...

House tax bill would likely force Peter Thiel to pull $5 billion from his...

News - March 9, 2022 0
NEW YORK, March 9, 2022 /PRNewswire/ -- The cloud computing market is expected to grow by USD 287.03 billion from 2020 to 2025. However,...
© 2022 Venture Current is a Flag Media LLC Publication. All Rights Reserved.
VC is part of the FLAG Token rewards network. Clients and partners can use FLAG Tokens for VC products and services.
VC runs 'Automatic' software. Stories posted here come from generic-topic Google news RSS feeds as well as client and partner-approved content.
If a story appears on this page that needs to be deleted due to licensing issues, please message us immediately so we can help you.