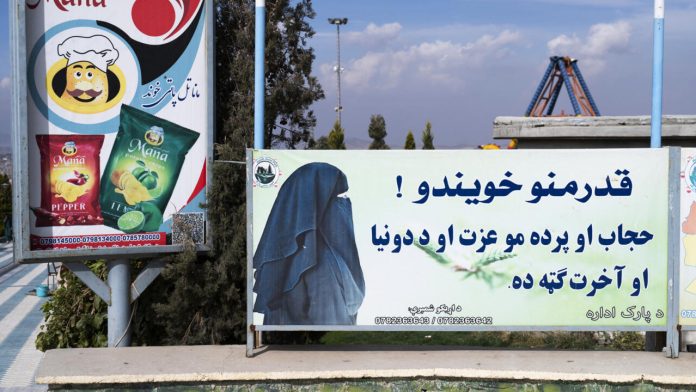 The Taliban’s latest edict banning women from working for non-governmental organisations (NGOs) has sparked international condemnation and domestic opposition in a country facing economic collapse. It has also revealed splits within the Taliban, with potentially high-stakes risks for Afghanistan’s rulers and its people.

The last week of 2022 began with an awful shock for Sahar H, a 24-year-old Afghan aid worker, and her new year started with severe anxiety.

On December 24 – the day after the Friday weekly holiday in Afghanistan – Sahar was on her computer in Kabul, preparing for an upcoming women’s support session. An NGO programme manager, Sahar did not want her real name, or that of her organisation’s, revealed due to security concerns.

Engrossed in her work, Sahar barely glanced at her mobile phone when it pinged a WhatsApp message. But when she saw the sender, a fellow NGO worker handling security issues at a partner organisation, it got her attention.

The message contained the latest Taliban edict from the economy ministry and it was a shocker. Citing “serious complaints regarding the non-observance of the Islamic hijab”, the Taliban ordered “all national and international organisations to stop females working” immediately until further notice. Failure to comply would result in revoked licences, the edict warned.

“I immediately stopped working, closed my computer and I just couldn’t stop my tears,” said Sahar in a phone interview from Kabul. “I never thought this would happen.  That day, I lost my most important right: the right to work.”

The edict spelt economic disaster for Sahar’s nine-member family. “All the male members of my family lost their jobs after the Taliban takeover. I was the only one with a job. I was the only one earning a salary and I was covering all the costs – for rent, food, medicines and my younger brothers’ education. Now we are all affected, the whole country is affected,” she said.

As the world welcomed 2023 with festive lights and fireworks, Afghanistan plunged deeper into a dark night of obscurantism.  Over the past few months, the country’s conservative Islamist rulers have blasted the myth of the “Taliban 2.0” narrative touted during negotiations to enable the 2021 US withdrawal from Afghanistan. They now appear hell-bent on ruining the lives of their fellow Afghans, eradicating women from public life and plunging the country into penury.

Public outrage is mounting inside the country, with protests and walkouts erupting despite the harsh crackdowns on dissent.

More significantly, there are growing signs of divisions within the Taliban over hardline policies. A tipping point, if it is reached, could have high stakes in a country with a history of settling differences at gunpoint, tipping Afghanistan into civil war. And that could have consequences for the international community – as history has shown.

The ‘Kandaharis’ and ‘Kabul Taliban’

Reports of rifts within Taliban ranks have increased since the edict banning women from working in NGOs was issued, and they come from well-informed sources.

“Within the Taliban, this is a minority view. The majority, even in the leadership, is opposed to this decision,” said former US special envoy to Afghanistan, Zalmay Khalilzad, in a phone interview from Washington DC.

As the head of the US team that negotiated the February 2020 peace agreement with the Taliban in Doha, Khalilzad spent months engaging with senior Taliban officials in the Qatari capital.

Khalilzad, who was born and raised in Afghanistan, stepped down from his special envoy post in 2021. But he says he is still in touch with some Taliban officials although he declined to name them. “I talked to them in the past and I’m talking to them now and they are very much against this decision,” he asserted.

The problem, though, appears to be a divide between the more moderate Taliban officials and the inner circle of arch conservatives ensconced around the Taliban’s reclusive emir, Hibatullah Akhunzada, based in the southern city of Kandahar.

Dubbed “the Kandaharis” or sometimes, “the shura” (council), the rural old guard is widely believed to be responsible for the Taliban’s most controversial policies, including restrictions on female education and the reintroduction of corporal punishment, including public lashings.

Unlike the Taliban officials in Kabul, the Kandaharis rarely, if ever, engage with outsiders. “I don’t know, frankly, the leaders who have decided this ban on women working for NGOs. I don’t deal with them. One can only speculate where they are coming from and what brought on their views, but speculation might not be useful,” maintained Khalilzad.

The first public sign of differences within Taliban ranks came in March 2022 over the movement’s controversial position on female education.

For months leading up to the March 23 reopening of Afghan schools after the winter break, Taliban officials promised that the ban on girls attending high schools would be lifted.

But just a few hours before the scheduled reopening, as Afghan girls waited at school gates, the Taliban abruptly reversed course. When the last-minute ban order reached the schools, news teams, invited by the education ministry, recorded devastating testimonies of girls in their school uniforms sobbing in despair.

In their immediate responses to the press, Taliban officials appeared to be caught off-guard, sputtering justifications on Islamic principles as they absorbed the blows of heated questioning by journalists.

In an extraordinary display of public disagreement, the Taliban’s deputy foreign minister, Sher Mohammad Abbas Stanikzai, later appealed for the reopening of girls high schools in a televised speech to a gathering of top Taliban officials and leaders in Kabul.

Stanikzai so far has gotten away with his public expression of disagreement. Other Taliban ministers have not been as fortunate.

Ministers promise – and are then fired

The December 24 ban on women working for NGOs came just days after the Taliban extended the restrictions on women’s education from high schools to universities.

Shortly after the August 2021 takeover, the then-acting minister of higher education, Abdul Baqi Haqqani, announced that universities across the country would have separate female classrooms.

It was a decision that segregated females, but didn’t deny them a university education.

The minister’s announcement provided a green light for universities, enabling them to continue classes for women, often with a curtain separating them from male students.

But in October 2022, the higher education minister was fired and replaced by arch conservative Nida Mohammad Nadim, who is notorious for his opposition to female education, calling it un-Islamic and against Afghan values.

Meanwhile the Taliban’s first education minister, Noorullah Munir, who told reporters in September 2021 that women will be allowed to study in schools in accordance with Sharia law, suffered a similar fate.

Under the orders of the Taliban emir, Munir was replaced by the head of Kandahar’s provincial council, Habibullah Agha, last year.

“The Taliban over the past 20 years have undergone a significant change in their composition to the extent that those now advocating for the ban, or have an antipathy to women’s modern education, are now a minority.

They are a powerful and influential minority who have gathered around the emir at the top,” explained Ahmed-Waleed Kakar, founder of The Afghan Eye.

“But there are other leaders within the Taliban who are all widely reported to be against this ban,” Kakar continued. “So the real question is, to what extent can the current mode of decision making and the nature of those decisions persist in the face of overwhelming opposition across the country, but also increasing opposition within the Taliban itself.”

Mandated to obey the emir – except…

While the internal divisions are growing, Kakar thinks it’s unlikely that they could splinter the Taliban.

“Since their inception up until this day, the Taliban are ideologically and religiously committed to obey the leader even when they disagree with the leader. That is a religious commitment,” Kakar explained. “The only time this does not apply is if the leader were to do something anti-Islamic.”

Khalilzad believes that time has come. “They have to reverse course of sticking to this decision [on the NGO ban] when the leader does something in violation of Islamic principles and the people are against it,” said the Afghan-American diplomat, who also served as US ambassador to Afghanistan.

“I believe the Taliban leaders opposed to this decision need to get together and stand up to their leader. This is a challenge: will they rise up to the occasion and work with other Afghans. If they don’t, they will alienate the Afghan people.”

The stakes, according to Khalilzad, are high. “The public mood is changing towards anger and opposition, providing a gift to those who want war. That’s not what Afghans want and that’s not what the Taliban want,” said the former US diplomat.

When asked if he shares these views with Taliban officials, Khalilzad replied in the affirmative. “I do bring it up with them. They say they understand, but they say this will take time, one has to be patient. I say time is not on their side, anger will grow, pressure will grow, and they will be blamed for the increased suffering of the people. They don’t push back,” he recounted.

While the Taliban men dither and ask for patience, their womenfolk are sinking into misery as every window of opportunity gets slammed in their faces.

From her home in Kabul, Sahar worries about funding for the programmes she runs. “We were preparing for long-term projects. We already submitted our proposal for 2023 to donors, we were optimistic about getting funds,” she explained.  “But with this Taliban decision, donors are unsure about continuing their funding.”

As a new year kicks off, Sahar says she refuses to give up in despair. “My request is for people from around the world, for donors, not to abandon Afghan women. It’s a very tough situation, but I won’t give up,” she said. “I am optimistic for 2023, there will be better days. The women of Afghanistan will not be forgotten.”

News - March 7, 2022 0
House Speaker Nancy Pelosi says the House is exploring legislation to further isolate Russia from the global economy, including banning the import of its...

Sheep Farmer Couldn’t Attend Aunt’s Funeral, Did This Instead

News - February 28, 2022 0
"The market does very much recognise that the major risks point towards EUR weakness," he said. The possibility of an energy crisis...

Interview: Joe Hunting on We Met in Virtual Reality

News - July 29, 2022 0
The director opens up about the challenges of filming a doc entirely inside virtual reality and advocating for safe, positive communities in that space....

Will You Pay the PSVR2 Launch Price?

News - November 2, 2022 0
https://www.youtube.com/watch?v=P7egc3gic8k Sony has announced its next-gen PSVR2 headset will cost £529.99/$549.99/€599.99, which is more than a PS5. It's a lot of money to see written...
© 2022 Venture Current is a Flag Media LLC Publication. All Rights Reserved.
VC is part of the FLAG Token rewards network. Clients and partners can use FLAG Tokens for VC products and services.
VC runs 'Automatic' software. Stories posted here come from generic-topic Google news RSS feeds as well as client and partner-approved content.
If a story appears on this page that needs to be deleted due to licensing issues, please message us immediately so we can help you.