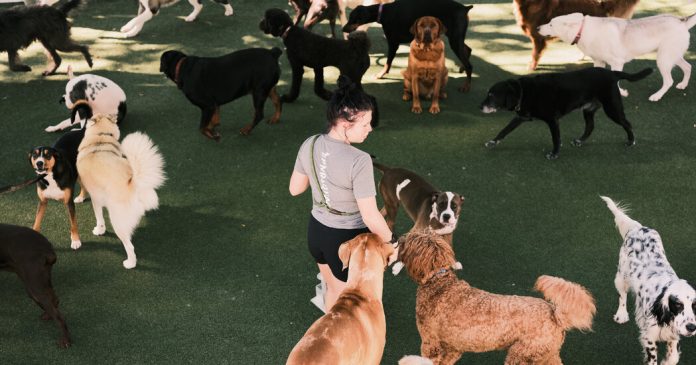 An unexpected result of the pandemic era has been a surge in entrepreneurial activity. Since 2020, applications to start new businesses have skyrocketed, reversing a decades-long slump.

The reasons for the boom are manifold. Millions of people were suddenly laid off, giving them the time, and inclination, to start new businesses. Personal savings jumped, buoyed partly by a frothy stock market and government stimulus payments, providing would-be entrepreneurs with the means to fulfill their visions. Rock-bottom interest rates made money cheap and widely available.

But the ebullient economic environment that helped foster this entrepreneurial spirit has given way to high inflation, rising interest rates and dwindling savings. That has left these nascent businesses to navigate challenging financial crosscurrents — and a possible recession — at a moment when they are at their most fragile. Even under normal conditions, roughly half of new businesses fail within five years.

“Young businesses are inherently vulnerable,” said John Haltiwanger, an economist at the University of Maryland who studies entrepreneurship. “They’re likely to fail, and they are especially likely to fail in a recession.”

In 2021, Americans filed applications to start 5.4 million new businesses, according to data from the Census Bureau. That was on top of the 4.4 million applications filed in 2020, which had been the highest by far in the more than 15 years the government had been keeping track. (Filings last year through November were running ahead of 2020 but behind 2021; figures for December will be released this week.)

Data on actual business formation will not become available for several years, so it is not possible yet to measure the effects of the cooling economy on new ventures. Whether these new businesses pull through could have broad implications for the health and dynamism of the overall economy.

But he cautioned that the Federal Reserve’s monetary policy — intended to tamp down the fastest price increases in decades — is “ramping up the headwinds facing entrepreneurs to gale force by crushing demand and by increasing the price of money.”

In interviews, entrepreneurs expressed a mix of resolve and resignation about the months ahead. Some said they had learned lessons from the pandemic’s upheaval about how to endure financial adversity that they believed had recession-proofed their business models. Others were cleareyed about needing outside funding that they feared would no longer arrive.

What is inflation? Inflation is a loss of purchasing power over time, meaning your dollar will not go as far tomorrow as it did today. It is typically expressed as the annual change in prices for everyday goods and services such as food, furniture, apparel, transportation and toys.

What causes inflation? It can be the result of rising consumer demand. But inflation can also rise and fall based on developments that have little to do with economic conditions, such as limited oil production and supply chain problems.

Is inflation bad? It depends on the circumstances. Fast price increases spell trouble, but moderate price gains can lead to higher wages and job growth.

“It’s been a bumpy ride, for sure,” said Jennifer Sutton, who started a juice and wellness bar in Park City, Utah, in 2021. She is most worried about inflation, she said, as well as the prospect of a recession that could reduce the tourism that her business depends on. She opened a second location inside a grocery store, partly because it required less start-up capital than opening another stand-alone storefront.

In many ways, however, Ms. Sutton is lucky. She largely self-financed her company, High Vibes Juicery and Wellness Bar, with her family’s savings and credit card debt.

Taylor Wallace, an entrepreneur in Florida, is in a different position.

After he was laid off from the augmented-reality company Magic Leap at the start of the pandemic, he reconnected with a friend, Mike Mayleben, who was looking to start a day care business for dogs. In the fall of 2020, the two began acquiring dog day care locations that were for sale, rolling them into a new business called Paws ‘n’ Rec.

The company, which offers membership-based day care, boarding and grooming, currently has two locations in the Tampa, Fla., area, with a third under construction. But the company wants to grow by opening more locations — just as inflation is pushing up construction costs and rising interest rates are making terms on loans more onerous. His borrowing costs on the company’s line of credit, which he expects to draw on soon, are based on prevailing interest rates and have increased by more than four percentage points from a year ago.

“Debt being more expensive is going to be massively challenging for us and everyone,” he said. “When we started this, we were dealing with money being the cheapest it’s ever been ever in the United States.”

Higher interest rates and uncertainty about the economy have also appeared to dry up once-flowing sources of capital, some entrepreneurs said.

When Lundon Attisha started his first business, Bidstitch, a subscription-based online marketplace and news site for vintage clothing, in the summer of 2021, he was quickly able to raise about $200,000 in venture capital and angel investment.

“I thought that I was the all-star of raising capital,” said Mr. Attisha, who quit his job at a law firm within a month to start his company. “The space was somewhat juiced at that point.”

Understand Inflation and How It Affects You

But investors seemed much more reluctant to put money into early-stage companies when he went to raise money again last year, he said. “The tone of the room with investors — there was a palpable change,” he said. He ended up selling Bidstitch in September to a portfolio company in Los Angeles.

That experience helped shape the business model for a second company that he started last year, Cita Reservations, an online reservations system for tables at sought-after restaurants. Rather than relying on outside funding, the company began charging people right away, selling reservations at some restaurants for $200. To drum up attention, he gives reservations away to social media influencers.

“We have to be much more mindful of where we are putting resources,” he said.

Census data shows that a large swath of new-business applications were for sole proprietorships that had no intention to hire employees. Many filings were also for businesses in industries that had been upended by the pandemic, including retail, food services and logistics, some of which may have been replacing others that shuttered.

But despite a slowdown that could harm new businesses, many economists are optimistic that the rush to start businesses that began in 2020 will still translate into job growth, innovation and, ultimately, a more productive economy.

The chief executive at a vacuum manufacturer in Price, Utah, that his father started in 1985, Spencer Loveless grew frustrated during the early months of the pandemic that supply chain issues were preventing him from getting parts from China. So he began using 3-D printers that his company had on hand to make his own parts. Companies that were similarly stuck in supply-chain snarls caught wind of what he was doing and began asking him to print items for them, too.

In November 2020, he started Merit3D, a 3-D printing company. The business originally had two employees, but it has been growing. Last year, he had 20 workers; this year, he aims to have 30 to 40.

His hiring plans don’t stop there. He wants Merit3D to eventually have 1,700 employees — helping to offset the loss of jobs at nearby power plants that will shut down in the years ahead.

Mr. Loveless said his goal for this year was to “bring as much revenue to the company as possible so that it can support itself as soon as possible.” He was relatively unmoved by the prospect of an economic downturn.

“I think the recession is going to hit harder than most people think,” he said. “How we prepare for that is we become the best at what we can do.”

News - August 19, 2022 0
Italian nationalist leader Giorgia Meloni has denied that her rightwing coalition would jeopardise Italy’s access to €200bn in EU Covid recovery funds if it...

Risk-on weighs on the greenback

News - January 19, 2023 0
domoyega | E+ | Getty ImagesWhen it comes to money matters, what you don't know can hurt you.A report from the National Financial Educators...
© 2022 Venture Current is a Flag Media LLC Publication. All Rights Reserved.
VC is part of the FLAG Token rewards network. Clients and partners can use FLAG Tokens for VC products and services.
VC runs 'Automatic' software. Stories posted here come from generic-topic Google news RSS feeds as well as client and partner-approved content.
If a story appears on this page that needs to be deleted due to licensing issues, please message us immediately so we can help you.