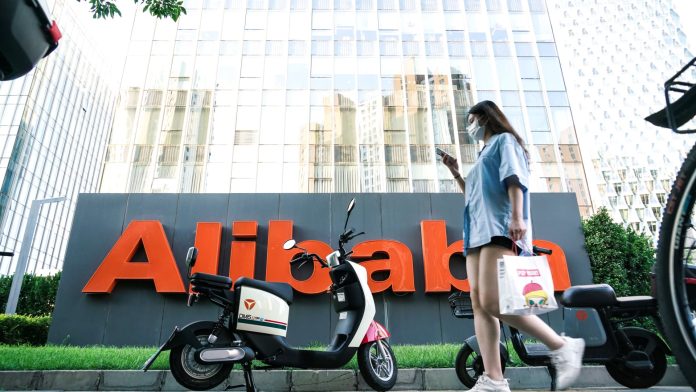 Alibaba has faced growth challenges amid regulatory tightening on China’s domestic technology sector and a slowdown in the world’s second-largest economy. But analysts think the e-commerce giant’s growth could pick up through the rest of 2022.

The American depository receipt shares of Alibaba jumped more than 6% in premarket trading following the news, as did shares of JD.com. Elsewhere, shares of Baidu and NetEase rose more than 5% each, while Trip.com popped 4.5%.

The moves come as investors are seeing signs of a more relaxed Chinese regulatory environment. Ant Group, which previously had its own IPO plans scuttled by regulatory concerns, was allowed to double its registered capital as part of the new plan.

A softer regulatory touch among its tech stocks, as well as the reversal of zero-Covid policies, is seen by some investors as a sign that the Chinese government will be supportive of private sector growth this year.

“China has struck a notably accommodating tone in recent months, pivoting away from its stringent COVID controls and dialing back its regulations on previously highly depressed sectors (i.e., property). The recent Central Economic Work Conference (CEWC) has set government’s priority for 2023 to revive consumption and support the private sector,” Fawne Jiang of Benchmark Capital wrote in a note to clients Wednesday.

ADRs are similar to common stock, but represent a more indirect form of ownership. They also allow Chinese shares to trade in the U.S. without the companies having to follow U.S. accounting regulations, which has led to concern that they may be delisted at some point in the future.

However, last month the Public Company Accounting Oversight Board — a U.S. accounting watchdog — announced that it had received access to examine accounting firms in China and Hong Kong. That move is seen as a positive step in lowering the risk of delisting.

Union Minister’s son booked for murder, UP strikes conditional truce with protesters : The...

Starlink internet may soon be available on airplanes, ships, and more

News - July 2, 2022 0
Earlier in June, we brought you the news that SpaceX's satellite internet service may soon be available for passengers aboard Royal Caribbean Group cruise...

News - February 21, 2022 0
FromSoftware’s latest action RPG Elden Ring is nearly ready to take the world by storm across all announced platforms. However, the release specifics may...

News - November 16, 2022 0
The UK government has awarded a £1.6bn contract to build three support ships for the Royal Navy to a consortium that includes a state-owned...

News - August 4, 2022 0
Meet 5 success stories of Entrepreneur First—the global talent investors breaking ground in Canada As Canada’s world-class tech sector continues to grow, rivalling Silicon Valley...
© 2022 Venture Current is a Flag Media LLC Publication. All Rights Reserved.
VC is part of the FLAG Token rewards network. Clients and partners can use FLAG Tokens for VC products and services.
VC runs 'Automatic' software. Stories posted here come from generic-topic Google news RSS feeds as well as client and partner-approved content.
If a story appears on this page that needs to be deleted due to licensing issues, please message us immediately so we can help you.