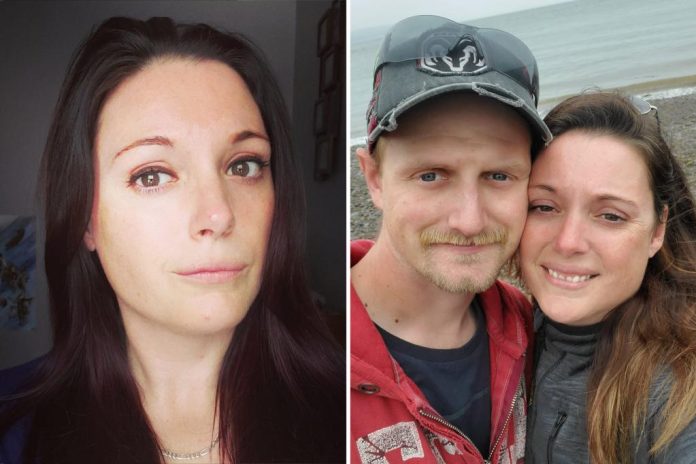 A Canadian mom of three died in agony at a Nova Scotia hospital after waiting for medical help in the emergency room for nearly seven hours on New Year’s Eve — and now her widowed husband is demanding answers.

Gunther Holthoff told reporters earlier this week that his 37-year-old wife, Allison, woke up on Dec. 31 complaining of what she thought was an upset stomach.

He said Allison had fallen off a horse back in September and had been suffering from pain ever since, according to reporting by CTV News.

Throughout the day, her condition deteriorated, and after taking a bath, the woman ended up writhing in pain on the floor.

Holthoff drove Allison to the Cumberland Regional Health Care Centre in Amherst, arriving there shortly after 11 a.m. and carrying her into the building on his back because she was unable to walk.

The husband then got a wheelchair and wheeled his wife into the emergency room. He said she was struggling to sit up because of the excruciating pain.

“I did tell the triage nurse and the lady behind the desk that it was getting worse,” he said. “She wasn’t doing good and was in pain.”

Hospital staff took samples of Allison’s blood and urine, which her husband said proved difficult because she was in so much pain by then.

Allison was instructed to sit in the waiting room, but her condition worsened to the point that she had to lie on the floor in a fetal position.

As they waited for a doctor to see Allison, security guards brought some blankets to cover her and a cup of water.

It was then that Holthoff said his wife started telling him she thought she was dying.

At 3 p.m., the Holthoffs were finally led into an exam room, where more blood samples were taken from the patient.

Holthoff said he went to the nursing desk five times, telling staffers his wife was feeling worse. He said one of the nurses asked him if Allison was “always like this.”

Allison’s eyes then started rolling back in her head, prompting the nurse to inquire of her husband if the married mom was on drugs, to which he said, “No.”

Holthoff said Allison continued saying she felt like she was dying.

Around 6 p.m. — nearly seven hours after the Holthoffs first arrived at the hospital — Allison began screaming in pain and begging for help.

Another nurse came in to check her vitals and found that her pulse was elevated and her blood pressure low.

Keep up with today’s most important news

Stay up on the very latest with Evening Update.

“Everything happened quickly after that, everyone started picking up the pace,” the husband said. “That was the first time I actually felt like someone was paying attention to us.”

At last, Allison was seen by a doctor for the first time that afternoon, given IV fluids and painkillers. She then had an EKG done and was taken to an X-ray room.

Holthoff briefly stepped away, and when he returned, he said, he found his wife screaming, “I can’t breathe. I’m in pain. Don’t move me.”

Allison’s eyes rolled back in their sockets again and a “code blue” was called, alerting medics that a patient was experiencing a cardiac arrest.

According to Holthoff, Allison was resuscitated three times, but a decision was made not to operate on her because the odds of her surviving a surgery were determined to be minimal given her condition.

Holthoff said a doctor revealed to him that a CT scan showed bleeding inside his wife’s body, but its source could not be pinpointed.

“They had a 1 percent chance of keeping her alive with surgery, but at that point, there was not much chance of her ever having a normal or dignified life,” Holthoff said.

After the husband and his three children said their final goodbyes to Allison, she was officially pronounced dead around 11:30 p.m. — some 12 hours after she first set foot inside the emergency room.

More than a week later, Holthoff said he still does not know the cause of his wife’s death because her autopsy report has not been released, according to the news outlet CBC.ca.

“Unfortunately, I do feel like she was neglected and it was to a point where they couldn’t ignore us anymore,” the bereaved husband told reporters.

In the wake of the tragedy, the woman’s family and several Nova Scotia politicians have called on the province’s government to explain why the patient’s medical care was delayed for hours.

The Department of Health and Wellness said Monday that Nova Scotia Health Authority has launched an investigation to determine what happened in Allison’s case.

“We need change, the system is obviously broken. Or if it’s not broken yet, it’s not too far off,” Holthoff said. “Something needs to improve. I don’t want anybody else to go through this.”

News - December 4, 2021 0
The broad markets turned much lower to close out the week and it was especially felt in the tech sector. ARK Funds saw another...

Here’s where China’s real estate troubles could spill over

News - August 12, 2022 0
China's real estate industry accounts for more than a quarter of national GDP, according to Moody's. Pictured here is a residential complex under construction...

News - January 15, 2022 0
Dow Jones futures will open on Sunday evening, along with S&P 500 futures and Nasdaq futures. The stock market rally is teetering, with last...
© 2022 Venture Current is a Flag Media LLC Publication. All Rights Reserved.
VC is part of the FLAG Token rewards network. Clients and partners can use FLAG Tokens for VC products and services.
VC runs 'Automatic' software. Stories posted here come from generic-topic Google news RSS feeds as well as client and partner-approved content.
If a story appears on this page that needs to be deleted due to licensing issues, please message us immediately so we can help you.