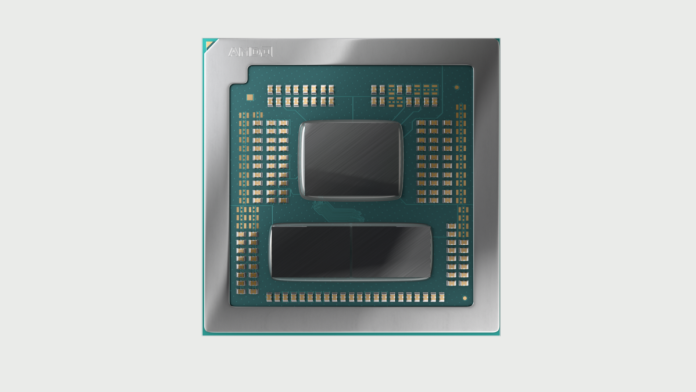 Essentially a repackaged version of the Ryzen 7000-series (opens in new tab) already seen on the desktop, it comes complete with Zen 4 architecture and chiplet engineering, with an I/O die and up to two CPU core dies.

There’s also the same teensy little 2CU RDNA 2 graphics core in the I/O die, just like the desktop Ryzen 7000. That graphics is not, of course, intended for gaming. For that, AMD has RDNA 3, also known as the new Radeon RX 7000 mobile chips (opens in new tab).

Back to mobile CPUs, this new family of chips tops out at 5.4GHz in the Ryzen 9 7945HX, which is the full 16-core monster. AMD is pitching the 7045 Series as both the “ultimate mobile gaming platform” and offering a “new frontier of performance for mobile creators.”

The extent to which the new 7045 series is focussed on pure performance rather than efficiency or battery life is underlined by the memory support on offer. That’s limited to DDR5 with no support for more efficient LPDDR5. Do not expect all-day battery life from a Ryzen 7045 Series laptop.

As for gaming, AMD reckons the new chip is between 29% and 62% faster compared to the Ryzen 9 6900HX, which is pretty spectacular if accurate.

Among the early adopters of the Ryzen 7045 mobile will be the new Alienware M16 and M18 (opens in new tab), the Asus Strix and Lenovo Legion. It’s notable just how much more traction AMD has with notebook PC makers these days.

Where once AMD would only win a handful of laptop designs with Intel dominating the market, we expect to see plenty of systems offering these new CPUs, including all the big brands.

AMD hasn’t announced pricing. And in any case, mobile CPUs tend to be bought with a laptop, not separately. But AMD says the first laptops with the chips will ship in February.

News - June 15, 2022 0
Lord Christopher Geidt on Wednesday became the second ethics adviser to quit under Boris Johnson’s premiership, a day after expressing his “frustration” over the...

Shell investors back moving HQ from Netherlands to UK

News - December 10, 2021 0
Royal Dutch Shell shareholders have overwhelmingly backed sweeping changes to the company’s share structure and tax residence, paving the way for the board to...

News - January 24, 2023 0
By Lidia Kelly(Reuters) - Russia's new military reforms respond to possible NATO expansion and the use of Kyiv by the "collective West" to wage...

News - September 21, 2021 0
...
© 2022 Venture Current is a Flag Media LLC Publication. All Rights Reserved.
VC is part of the FLAG Token rewards network. Clients and partners can use FLAG Tokens for VC products and services.
VC runs 'Automatic' software. Stories posted here come from generic-topic Google news RSS feeds as well as client and partner-approved content.
If a story appears on this page that needs to be deleted due to licensing issues, please message us immediately so we can help you.