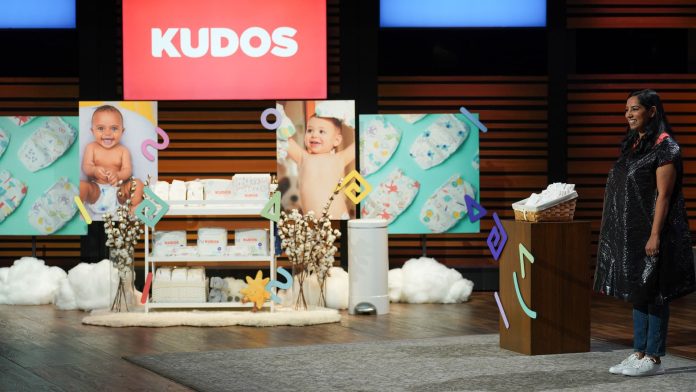 After working as Procter & Gamble engineer for two years, the MIT and Harvard University graduate didn’t understand why the company was making sanitary napkins and diapers with harsh chemicals.

So she quit her job and moved to India, where she built a company called Saathi around a sanitary napkin made from banana peel fibers, which she’d invented at MIT. After six years, she moved back to the U.S. suspecting she could create a better diaper, too.

In 2021, she launched Los Angeles-based Kudos, which makes disposable diapers from cotton and other sustainable materials — and on Friday’s episode of ABC’s “Shark Tank,” she scored a $250,000 investment in Kudos from Mark Cuban and guest Shark Gwyneth Paltrow.

Both Cuban and Paltrow said they were interested in the product’s sustainability, its chemical-free nature and, perhaps most notably, its sales. Kudos brought in $850,000 in revenue in its first full year of business, Saigal said on the show.

The investors also liked Saigal’s entrepreneurial track record, and her risk-taking willingness to sacrifice job security for chasing an idea.

“I saw firsthand just how much plastic we were putting into sanitary napkins and diapers,” Saigal explained. “I decided to quit my stable job and move to India to start my first company.”

Before appearing on the show, Kudos had raised $3.3 million at a $12.5 million valuation. Saigal used that figure to ask the Sharks for $250,000, in exchange for 5% of the company.

Kevin O’Leary wasn’t convinced that Kudos’s product would make it in a cutthroat industry. “This is a very mature market,” O’Leary said. “Do you really think after you get, let’s say 4 or 5% of the market, they’re not going to wake up and say, ‘We need an eco-friendly diaper?'”

Kudos represented a gap in the industry, Saigal responded. Plus, she added, even 0.01% of the industry is more than $8 million.

Last year, the diaper market was worth $82.59 billion in the U.S. alone, according to a Grand View Research report. Procter & Gamble is one of the market’s most dominant players, the report notes.

“We need to figure out how to make this product a household name,” she said. “We need to expand into other online retailers. We know the Goop audience is very, very aligned [and] has shared values.”

With that, Cuban’s interest was piqued. He asked Paltrow if she would be interested in partnering together.

Negotiations went quickly: The pair offered Saigal $250,000 for 12%. Saigal asked if they’d be willing to split 8%, and Cuban said they’d come down to 10%, with some of the equity in advisor shares.

Saigal proposed 7% equity with 3% in advisor shares, and Cuban and Paltrow accepted. Saigal said she was ecstatic because Kudos’ products aligned with Paltrow’s lifestyle brand, Goop.

The investors expressed optimism, too. Cuban told Paltrow he thought Saigal was “a star” with a “dynamic pedigree.”

“You have to bet on a jockey like that,” Paltrow responded. “She clearly has a business mind and engineer’s mind. I think she’s doing something that is really important and really needed in the market.”

17-year-old ‘Shark Tank’ contestant made slime in his garage, sold it to his friends, brought in $1 million in just 3 years

News - October 28, 2021 0
Music distribution company UnitedMasters on Thursday raised $50 million in a Series C investment led by Andreessen Horowitz at what is now a $550...

How to invest amid higher inflation and buying a car from the factory can...

News - January 14, 2022 0
Hi, MarketWatchers. Don’t miss these top...
© 2022 Venture Current is a Flag Media LLC Publication. All Rights Reserved.
VC is part of the FLAG Token rewards network. Clients and partners can use FLAG Tokens for VC products and services.
VC runs 'Automatic' software. Stories posted here come from generic-topic Google news RSS feeds as well as client and partner-approved content.
If a story appears on this page that needs to be deleted due to licensing issues, please message us immediately so we can help you.