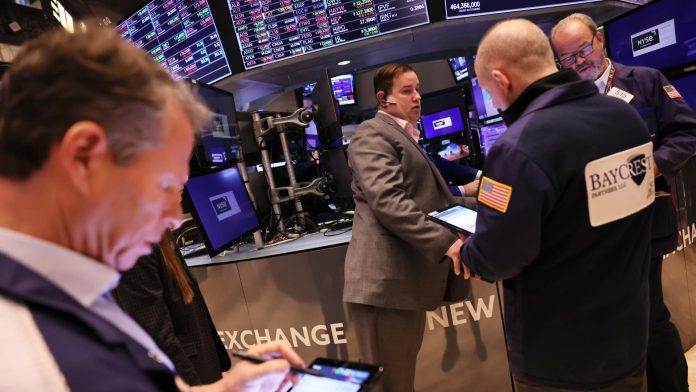 Investors are preparing for a gloomy 2023 by doubling down on cash-rich companies . “We prefer companies generating cash rather than those that need capital to grow. Not only are rates likely to remain higher than they have been in recent past, but we are likely exiting an era of hyper-accommodative monetary policy,” Bank of America said in a Jan. 16 note. The higher the free cash flow yield, the better a company’s position to meet its debt obligations. A company with a high free cash flow is also able to access cash more quickly in the event of an emergency or opportunity. “Companies that pay dividends, companies with great cash flow, quality balance sheets, international stocks — international value in particular — this is where the puck has been headed already, and I think it will continue,” Josh Brown, CEO of Ritholtz Wealth Management, told CNBC last week. Using FactSet data, CNBC Pro screened for stocks that boast lots of cash and could be well positioned for a rocky year. These were the criteria used: Stocks with high free cash flow yield of more than 10% Low volatility (beta of less than 1) Potential upside to price target Buy rating of at least 40% Stocks that appeared on the screen below include those in the telecom, health care, and consumer sectors, which are generally regarded as safe havens in a downturn. U.S.-listed Chesapeake Energy Corporation was the only energy stock to appear on the screen, with its free cash flow yield at nearly 14%. Analysts gave it a 53.7% upside, and the majority (76.5%) gave it a “buy” rating. The stock, like most energy firms, did well in the past year — already climbing around 40%. Last week the firm announced that it had agreed to sell part of its operations in south Texas for $1.43 billion in cash. Firms in the health care or pharmaceutical industries also made the cut, such as U.S. companies Bristol-Myers Squibb and CVS Health . Financial services firm Cantor Fitzgerald said in a Jan. 17 note that 2023 could be Bristol-Myers Squibb’s “breakout year,” and gave the stock an overweight rating. “BMY has one of the best 2023E growth profiles of the US Pharma group … which stands out in a recession year,” Cantor wrote. Canadian financial firm Fairfax stood out for having the highest FCF yield in the list — at 30.4%, while Hong Kong-listed WH Group — the largest pork producer in the world — received the highest buy rating at 94%. Two telecommunication firms — Britain’s Vodafone Group and Germany-based Deutsche Telekom — had among the highest FCF yields at 27% and 23.7% respectively. Argus Research in a Jan. 20 report noted that Vodafone shares outperformed the benchmark over the past three months. It added that its current valuation is reasonable, given the slow growth outlook. — CNBC’s Michael Bloom and Fred Imbert contributed to this report.

News - November 10, 2021 0
Poland's prime minister says Belarus is flying in migrants and sending them to the border. Source

How to Book Free Travel With Credit Card Rewards — for Beginners

News - January 15, 2023 0
After a tumultuous 2022, crypto investors are trying to figure out when the next bitcoin bull run could be.Last week, at a crypto conference...

News - July 19, 2022 0
“Honey, don’t forget your virtual reality goggles! And your lunch! We’re gonna be late for school!”As a technology reporter for Education Week...
© 2022 Venture Current is a Flag Media LLC Publication. All Rights Reserved.
VC is part of the FLAG Token rewards network. Clients and partners can use FLAG Tokens for VC products and services.
VC runs 'Automatic' software. Stories posted here come from generic-topic Google news RSS feeds as well as client and partner-approved content.
If a story appears on this page that needs to be deleted due to licensing issues, please message us immediately so we can help you.