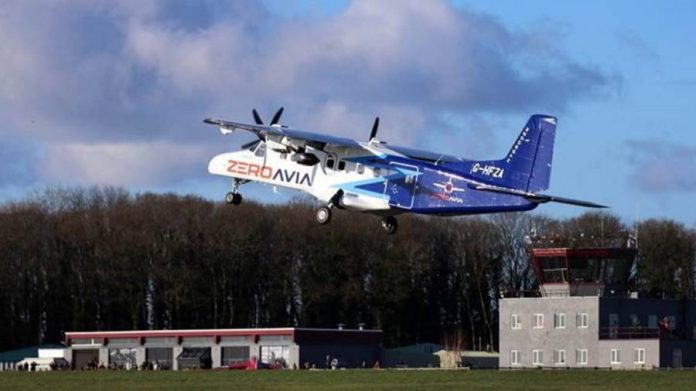 An Anglo-US start-up has successfully completed a test flight of a propeller aircraft partially powered by hydrogen fuel cells in what it hailed as a major breakthrough for the industry.

It was the largest aircraft powered by a hydrogen-electric engine, according to the start-up.

Val Miftakhov, who founded ZeroAvia in 2017, described the test flight as a “historic day for sustainable aviation”, promising that the technology would be in “commercial use in just a couple of short years”.

The aerospace industry is working on a number of different technologies, from “sustainable aviation fuels” to electric batteries and hydrogen.

Flying is one of the most difficult industries to decarbonise. Before the pandemic led to the grounding of much of the world’s aircraft, aviation accounted for roughly 2.4 per cent of global emissions.

While differences remain about the speed at which the industry can make hydrogen propeller flight a reality, there is a growing consensus that it will have a role to play in powering short to medium-haul aircraft.

Since it was launched ZeroAvia has pulled in about $150mn in backing from a range of high-profile investors including Bill Gates and Jeff Bezos, and agreed partnerships with the likes of British Airways, United Airlines and Shell, which is supplying it with the hydrogen.

Two-thirds of ZeroAvia’s 150 staff are in the UK, although the business is based in California.

The company plans to install its engines on existing airframes to simplify getting regulatory approval and reduce the time to market.

It has already conducted a number of test flights on smaller propeller planes. It hopes to have a 9-19 seat turboprop ready for commercial flights by 2025, with a 40-80 seat aircraft entering service by 2027.

For the test flight, the company retrofitted the Dornier aircraft with a full-sized prototype hydrogen-electric engine on the left wing.

The tanks storing the hydrogen and fuel cell power generation systems were housed inside the cabin of the aircraft.

Miftakhov said the company had already received 1,500 pre-orders for its engines, including 600-700 for the size tested during Thursday’s flight.

The company will announce its launch operators shortly. It will need to raise additional funds to support full-scale commercialisation of its engines.

Thursday’s flight was partially funded by the UK government’s HyFlyer II project backed by the Aerospace Technology Institute, which allocates state funding for innovation in the sector.

News - September 11, 2021 0
Sport updatesSign up to myFT Daily Digest to be the first to know about Sport news. Emma Raducanu won the women’s US Open title on...

News - May 18, 2022 0
The chancellor says it won't be easy to tackle cost of living crisis as inflation hits 40-year high. Source
© 2022 Venture Current is a Flag Media LLC Publication. All Rights Reserved.
VC is part of the FLAG Token rewards network. Clients and partners can use FLAG Tokens for VC products and services.
VC runs 'Automatic' software. Stories posted here come from generic-topic Google news RSS feeds as well as client and partner-approved content.
If a story appears on this page that needs to be deleted due to licensing issues, please message us immediately so we can help you.