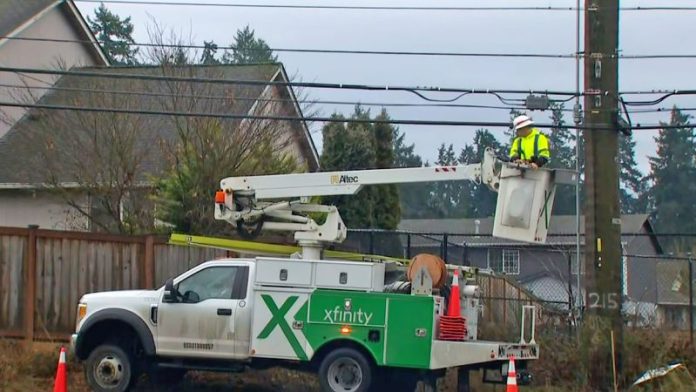 No suspects are in custody at this time, the Pierce County Sheriff’s Department added in a statement Sunday.

The sheriff’s department said their agency first received a report of a burglary at the Tacoma Public Utilities substation at 5:26 a.m. PT.

“Deputies arrived on scene and saw there was forced entry into the fenced area,” according to the statement. “Nothing had been taken from the substation, but the suspect vandalized the equipment causing a power outage in the area.”

Pierce County Sheriff Deputies were alerted to a report of a second burglary at another Tacoma Public Utilities substation, which also had forced entry with damage to equipment, the statement said. Similar to the first substation, nothing was taken.

“At 11:25 we were notified by Puget Sound Energy that they too had a power outage this morning at 02:39 am. Deputies are currently on scene at this facility where the fenced area was broken into and the equipment vandalized,” the statement continued.

“At this time deputies are conducting the initial investigation. We do not have any suspects in custody. It is unknown if there are any motives or if this was a coordinated attack on the power systems,” the statement said.

The FBI’s Seattle Division told CNN Sunday it was aware of the reports but declined to confirm or deny its role in any investigation, adding, “We do take threats against our infrastructure seriously and urge anyone with information to contact law enforcement.”

News - November 30, 2022 0
Over the past 11 years, eFounders has refined the startup studio model in Europe. The company has contributed to the launch of more than...

News - March 20, 2022 0
Prime Minister Boris Johnson has been engulfed by a tide of criticism at home and across Europe after he compared Ukraine’s fight for “freedom”...

OSOM’s new render of the 5G OV1 corrects the unrealistic small bezel on the...

News - December 26, 2021 0
Germany’s premium car manufacturers enjoyed record high prices for their luxury models in 2021 as a shortage of semiconductors restricted the supply of vehicles...

News - April 6, 2022 0
KYIV, Ukraine — (AP) — Western governments prepared Wednesday to toughen sanctions against Russia and send more weapons to Ukraine, after President Volodymyr Zelenskyy...
© 2022 Venture Current is a Flag Media LLC Publication. All Rights Reserved.
VC is part of the FLAG Token rewards network. Clients and partners can use FLAG Tokens for VC products and services.
VC runs 'Automatic' software. Stories posted here come from generic-topic Google news RSS feeds as well as client and partner-approved content.
If a story appears on this page that needs to be deleted due to licensing issues, please message us immediately so we can help you.