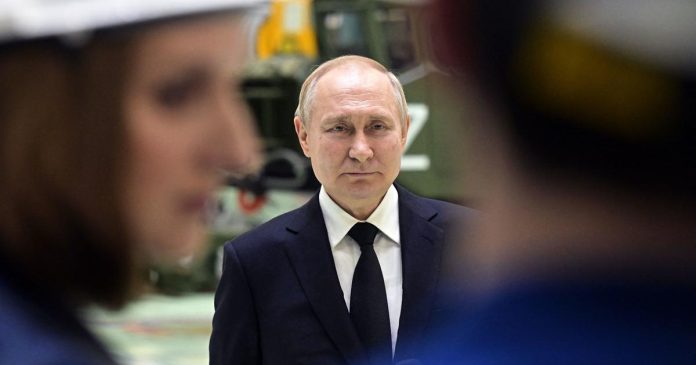 As the United States prepares to announce a new shipment of military hardware for Ukraine and Kyiv pushes its Western partners for modern battle tanks and other heavy weapons, Moscow responded Thursday with a familiar battery of threats. Once again, Russia alluded to its nuclear arsenal in a bid to dissuade the U.S. and its NATO allies from helping Ukraine resist the full-scale invasion President Vladimir Putin launched almost 11 months ago.

“It never occurs to any of the lowlifes to draw an elementary conclusion from this: The defeat of a nuclear power in a conventional war can trigger a nuclear war,” former Russian President Dmitry Medvedev, a top Putin ally who now serves as deputy chairman of the Security Council, said in a post on Telegram.

“Nuclear powers have not lost major conflicts on which their fate depended,” added Medvedev, whose rhetoric has grown increasingly bellicose over the course of the nearly a year-long war.

When asked whether Medvedev’s eyebrow-raising statement represented an escalation of the conflict in Ukraine or Russia’s broader standoff with the West, the Kremlin’s top spokesman said Thursday that the remarks were in line with Russia’s nuclear doctrine.

“There are no contradictions there,” presidential spokesperson Dmitry Peskov said.

Striking an eerily similar note, the head of the Russian Orthodox Church professed in a Thursday sermon that “an attempt to destroy Russia would mean the end of the world.”

“Today there are very big threats to the world, to our country, and to the whole human race, because some crazy people had the idea that the great Russian power, possessing powerful weapons, inhabited by very strong people… who have always come out victorious, that they can be defeated,” said Patriarch Kirill, a staunch backer of all Kremlin policy.

In Washington, State Department spokesman Vedant Patel said the latest comments were consistent with Russia’s previous statements regarding the use of nuclear weapons.

“This is not the first time that we have seen such kind of rhetoric from Russia broadly … We think provocative rhetoric regarding nuclear weapons is not only dangerous, it is reckless, adds to the risk of miscalculation and candidly it should be avoided,” Patel said. “A nuclear war cannot be won and must never be fought.”

This week, Russian authorities put on a show of force. Putin gave orders to expand the Russian army by around 300,000 people, which would see the number of serving soldiers swell to 1.5 million over the next three years. He also ordered a new army corps and two military districts to be established near European borders.

Defense Minister Sergei Shoigu later laid out an ambitious plan for these changes, saying new military structures would be created around Moscow, St. Petersburg and Karelia. The last location is right on the border with Finland, a Nordic nation that is in the process of becoming a NATO member.

“Self-sufficient” units were also to be deployed to the Ukrainian territories that Russia illegally annexed, Shogui said, despite the Russian military not fully controlling those areas.

“Ensuring the military security of the state, protection of the new federal subjects and critical facilities of the Russian Federation can only be guaranteed by strengthening the key structural components of the Armed Forces,” Shoigu said, according to state-run news agency RIA Novosti.

The Kremlin called the planned military expansion a response to “the proxy war” it claims the West is waging against Russia in Ukraine — a claim Moscow has long wielded to justify its brutal invasion.

Some analysts have noted that the changes announced this week — especially breaking the current, single Western Military District into several smaller ones — in some ways represent a step into the past.

“Shoigu’s announcements since December have been a little surreal to see. In most cases, the posture changes are returning to the past (pre-2010 era), not a step forward,” said Dara Massicot, a senior policy researcher at RAND Corporation. “[His] statements of more billets and more divisions will need more people and equipment to populate them (even if they fall short of targets). This is a tall order to achieve by 2026 without major changes to the Russian economy and personnel system.”

On Wednesday, Putin toured a defense enterprise, the Obukhovsky Plant in St. Petersburg, which has been placed under U.S. sanctions, to praise efforts to increase the output of weaponry and heavy machinery.

Russia has lost a significant amount of equipment that has been either destroyed, captured by Ukraine or abandoned by retreating Russian soldiers over the last 11 months. Independent Russian and international media outlets have also reported in detail on the myriad cases when poorly equipped Russian soldiers ended up on the front line, pointing towards production difficulties in the country’s military-industrial complex.

Putin told workers at the plant that Russia was justified in calling Ukraine a country full of “neo-Nazis,” and he insisted that victory was “inevitable.”

News - August 22, 2022 0
Donald Trump has begun his legal fightback against the US justice department over the seizure of documents from his Mar-a-Lago resort, requesting an independent...

News - November 25, 2021 0
Fresh protests have broken out in Solomon Islands’ capital Honiara, witnesses have said, a day after demonstrators attempted to storm parliament and topple prime...
© 2022 Venture Current is a Flag Media LLC Publication. All Rights Reserved.
VC is part of the FLAG Token rewards network. Clients and partners can use FLAG Tokens for VC products and services.
VC runs 'Automatic' software. Stories posted here come from generic-topic Google news RSS feeds as well as client and partner-approved content.
If a story appears on this page that needs to be deleted due to licensing issues, please message us immediately so we can help you.