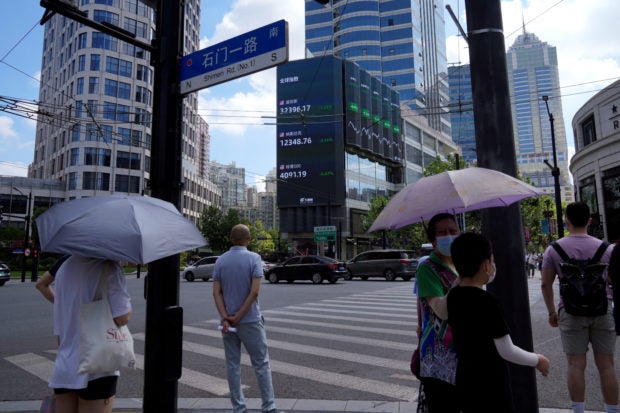 Pedestrians wait to cross a road at a junction near a giant display of stock indexes in Shanghai, China August 3, 2022. REUTERS/Aly Song/File photo

SYDNEY – Asian shares got off to a rocky start on Monday while the dollar remained in demand amid concerns most major central banks are committed to raising interest rates no matter the risks to growth.

Federal Reserve Chair Jerome Powell headlines a host of policy makers at Jackson Hole later in the week and risks are he will not meet investor hopes for a dovish pivot on policy.

“We expect a reminder that more tightening is needed and there is still a lot of progress to be done on inflation, but no explicit commitment to a specific rate hike action for September,” said Jan Nevruzi, an analyst at NatWest Markets.

“For markets, a bland delivery like that could be underwhelming.”

Futures are fully priced for another hike in September with the only question being whether it will be 50 or 75 basis points, while rates are seen up at 3.5 percent-3.75 percent by year-end.

A Reuters poll of economists forecast the Fed will raise rates by 50 basis points in September with the risks skewed towards a higher peak.

One exception to the tightening trend is China where the central bank is expected to trim some key lending rates on Monday by between 10 and 15 basis points.

Unease over China’s economy tipped the yuan to a three-month low last week while pressuring stocks across the region. Early Monday, MSCI’s broadest index of Asia-Pacific shares outside Japan was off 0.4 percent.

South Korea’s KOSPI shed 1.1 percent while Japan’s Nikkei fell 1 percent, though it has drawn support from a recent sharp reversal in the yen.

BofA’s latest survey of investors found most were still bearish though 88% did expect lower inflation over time, the highest percentage since the financial crisis.

“That helps explain this month’s rotation into equities, tech and discretionary, and out of defensives,” said BofA strategist Michael Hartnett. “Relative to history investors are still long defensives and short cyclicals.”

He remained a cautious bear given rising interest rates and recommended fading further S&P rallies above 4,328.

Equity valuations were not helped by a steep rise in global bond yields last week. British 10-year yields climbed by the most in five years following a shock inflation report, while bund yields jumped on a sky-high rise in German producer prices.

Ten-year Treasury yields rose 14 basis points over the week and last stood at 2.99 percent, while the curve remained deeply inverted to reflect the risk of recession. [US/]

The general air of global uncertainty has tended to boost the U.S. dollar as the most liquid of safe havens, sending it 2.3 percent higher last week to 108.18 on a basket of currencies last week in its best performance since April 2020.

“The USD can track above 110.00 week if the August flash PMIs for the major economies show a further slowing in economic growth or contraction in activity,” said Joseph Capurso, head of international economics at CBA, referring to surveys of manufacturing due on Tuesday.

“We also expect Powell to deliver a hawkish message about inflation in line with recent comments from other Fed officials, supporting the USD.”

Minutes of the European Central Bank’s last policy meeting are due this week and are likely to sound hawkish given they decided to hike by 50 basis points.

The rise in the dollar has been a setback for gold, which was pinned at $1,744 an ounce.

Oil prices were also under pressure amid worries about global demand and the high dollar.

News - January 28, 2022 0
Goldman Sachs doubled the pay of its chief executive, David Solomon, to $35m last year as the US bank reaped record profits during a...
© 2021 Flag Media Group. All Rights Reserved. ** TELL YOUR STORY **
We do not generate news. This digital publication and all Flag Media publications curate Google news using Google RSS Feeds.
Please advise if any posts need to be removed for licensing/copyright issues.