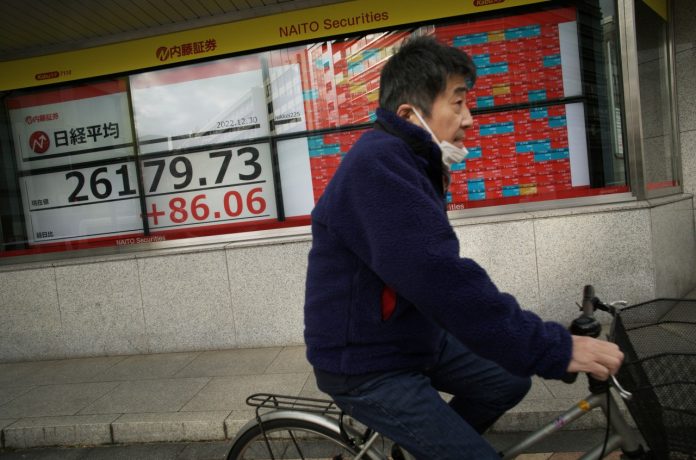 This week brings employment data and minutes from the latest meeting of the Federal Reserve as it battles inflation. That will likely remain investors’ overarching concern as 2023 begins with persisting uncertainties over the war in Ukraine and over whether interest rate hikes meant to tame inflation might lead to recession.

U.S. stock markets will be closed Monday in observance of the New Year’s Day holiday.

Over the weekend, a report showed that Chinese manufacturing contracted for a third consecutive month in December, in the biggest drop since February 2020, as the country grapples with a nationwide COVID-19 surge after suddenly easing anti-epidemic measures.

A monthly purchasing managers’ index declined to 47.0 from 48.0 in November, according to data released from the National Bureau of Statistics on Saturday. Numbers below 50 indicate a contraction in activity.

China is in the process of removing strict COVID-19 policies that crimped production for raw materials and goods and discouraged travel. It’s uncertain what impact the reopening will have on the global economy.

The minutes of the Fed’s meeting potentially will give investors more insight into its next moves. The government will also release its November report on job openings Wednesday. That will be followed by a weekly update on unemployment on Thursday. The closely-watched monthly employment report is due Friday.

Wall Street is also waiting on corporate earnings reports, which will start flowing in around the middle of January. Companies have been warning investors that inflation will likely crimp their profits and revenue in 2023, even after they raised prices on everything from food to clothing to offset inflation, helping to pad their profit margins.

On Friday, U.S. markets logged more losses in quiet trading, closing the book on the worst year for the benchmark S&P 500 since 2008.

That’s just its third annual decline since the financial crisis 14 years ago and a painful reversal for investors after the S&P 500 notched a gain of nearly 27% in 2021. All told, the index lost $8.2 trillion in value, according to S&P Dow Jones Indices.

Rising interest rates prompted investors to sell the high-priced shares of technology giants such as Apple and Microsoft and other companies that flourished as the economy recovered from the pandemic.

Amazon and Netflix lost roughly 50% of their market value. Tesla and Meta Platforms, the parent company of Facebook, each dropped more than 60%, their biggest-ever annual declines.

Russia’s invasion of Ukraine worsened inflationary pressure earlier in the year by making oil, gas and food commodity prices even more volatile amid existing supply chain issues. Oil closed Friday around $80, about $5 higher than where it started the year. But in between oil jumped above $120, helping energy stocks post the only gain among the 11 sectors in the S&P 500, up 59%.

News - January 3, 2023 0
In the same Famitsu article, the Persona developer Atlus has taken the time to thank fans for their support last year. It has also...

News - September 2, 2022 0
Australia has raised its permanent immigration intake by more than a fifth to almost 200,000 this year in an effort to address a crippling...

News - February 2, 2022 0
Church in virtual reality How the faithful worship changed dramatically during the pandemic with many turning to online services as...

News - February 15, 2022 0
Hundreds of blackbirds were seen on video falling from the sky in Mexico and hitting the pavement. Some died on impact.The circumstances surrounding the...

News - May 31, 2022 0
News, analysis and comment from the Financial Times, the worldʼs leading global business publication Source
© 2022 Venture Current is a Flag Media LLC Publication. All Rights Reserved.
VC is part of the FLAG Token rewards network. Clients and partners can use FLAG Tokens for VC products and services.
VC runs 'Automatic' software. Stories posted here come from generic-topic Google news RSS feeds as well as client and partner-approved content.
If a story appears on this page that needs to be deleted due to licensing issues, please message us immediately so we can help you.