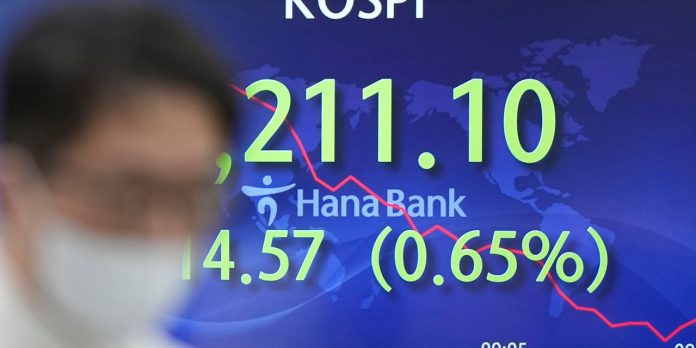 BEIJING — Asian stock markets were mixed Tuesday ahead of updates on U.S. employment amid fears of a possible global recession.

Coming off a year of big declines for major stock markets, traders worry the Federal Reserve and other central banks that have raised interest rates repeatedly to cool inflation might be willing to push the world into recession.

Inflation might “remain far north of 3% by the end of 2023, simply too high for central bank comfort,” said Stephen Innes of SPI Asset Management in a report.

in Hong Kong added 1.3%. Japanese markets were closed for a holiday.

shed 0.2% after South Korea’s 2022 exports fell 9.5% from the previous year and the country recorded its biggest trade deficit ever.

declined while those in Jakarta
JAKIDX,

advanced. New Zealand markets were closed for a holiday.

This week’s most closely watched data points are notes from the Fed’s latest meeting due to be released Thursday. That will give traders an update on the U.S. central bank’s thinking about the possible need for more rate hikes.

It will be followed Friday by U.S. employment data.

Forecasters expect monthly job gains to decline in December, which they hope might encourage the Fed to dial back plans for more rate hikes. But the Fed has a “clear focus on keeping inflation under check,” which “could still leave pricing data as the key driver of market moves,” Yeap Jun Rong of IG said in a report.

Traders also are looking ahead to corporate earnings reports in mid-January.

Global central banks are trying to extinguish inflation that is at multi-decade highs in many countries. It has been worsened by Russia’s invasion of Ukraine, which disrupted commodity markets and caused oil and wheat prices to spike.

News - January 11, 2023 0
After months of setbacks on the battlefield in Ukraine, Russia’s Vladimir Putin is apparently now left to demonstrate his toughness by getting into dust-ups...

News - December 4, 2021 0
Dow Jones futures will open Sunday evening, along with S&P 500 futures and Nasdaq futures. The price of Bitcoin and Ethereum plunged Saturday, the...

A Mixed Day for Financial Stocks Has Investors Hopeful Yet Concerned

News - October 17, 2022 0
The stock market continued its topsy-turvy behavior on Monday, bouncing back from a tough week with broad-based gains. The Nasdaq Composite (^IXIC) enjoyed the...

News - January 24, 2023 0
Traders on the floor of the NYSE, Aug. 4, 2022.Source: NYSEStock futures fell in overnight trading on Tuesday.Futures on the Dow Jones Industrial Average...
© 2022 Venture Current is a Flag Media LLC Publication. All Rights Reserved.
VC is part of the FLAG Token rewards network. Clients and partners can use FLAG Tokens for VC products and services.
VC runs 'Automatic' software. Stories posted here come from generic-topic Google news RSS feeds as well as client and partner-approved content.
If a story appears on this page that needs to be deleted due to licensing issues, please message us immediately so we can help you.