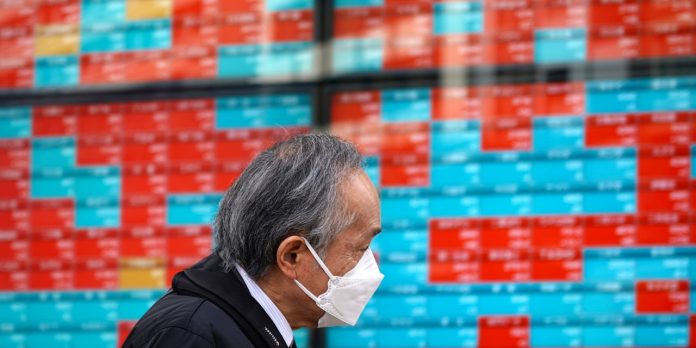 TOKYO — Asian shares were mixed Thursday ahead of a closely watched report on U.S. inflation viewed as a good indicator of whether Wall Street’s recent rising optimism is warranted or overdone.

lost 0.3%, while the Shanghai Composite
SHCOMP,

“All eyes are on the arrival of U.S. inflation data this week,” Clifford Bennett, chief economist at ACY Securities, said in a report.

Japan’s Finance Ministry reported the country’s current account returned to the black in November for the first time in two months, reflecting a slimming of the trade deficit as the yen regained value against the U.S. dollar and other currencies.

Stocks began 2023 with gains driven by hopes that cooling inflation and a slowing economy may lead the Federal Reserve to ease off its steep interest rate hikes. Such increases can help stamp out high inflation, but they also slow the economy and raise the risk of a recession while hurting prices for stocks and other investments.

Economists expect CPI Thursday’s report to show inflation is continuing to cool from its summertime peak, down to 6.5% last month from 7.1% in November and from more than 9% in June. The hope on Wall Street is that such a trend toward normal could convince the Fed to soon halt its blistering set of rate increases, often triple the usual amount.

Some investors are even betting the Fed will cut interest rates in the second half of this year to help prop up an economy that’s beginning to show pockets of weakness because of past rate hikes. Rate cuts typically act like steroids for markets, boosting prices for stocks and other investments.

“One real thing I think underpinning the market is simply the fact that the market doesn’t believe the Fed when they say they’re going to keep hiking this year,” said Brad McMillan, chief investment officer for Commonwealth Financial Network.

Of course, that also means investors could be setting themselves up for disappointment. If Thursday’s data and other reports don’t show inflation is improving as much as expected, it could mean the Fed would have to get tougher on interest rates.

The Fed has already said repeatedly it plans to raise its key overnight interest rate further, past its current perch sitting in a range of 4.25% to 4.50%. That rate began last year at its record low of virtually zero.

The central bank has also insisted it plans to keep rates high for a while to ensure inflation is really beaten down. It does not envision any rate cuts happening this year, and it’s even said that any “unwarranted” rallies on Wall Street “driven by a misperception” would only make the mission of returning inflation to normal more complicated.

The yield on the two-year Treasury, which tends to track expectations for Fed action, dipped to 4.22% from 4.24% late Tuesday. The 10-year Treasury yield, which helps set rates for mortgages and other important loans, fell to 3.52% from 3.61%.

SCO Summit: Putin needs Xi Jinping’s help more than ever after his setbacks in...

News - September 14, 2022 0
The summit, in which the pair touted their ever-growing ties and railed against NATO expansion, was held three weeks before Putin ordered his tanks...

Larry Summers says the Fed ‘let us down quite badly,’ is wrong about economy

News - June 10, 2022 0
NEWYou can now listen to Fox News articles! Ukraine is quickly running out of ammunition as they continue to pushback against the Russian...

News - September 8, 2021 0
Signet Jewelers CEO Gina Drosos told CNBC on Wednesday the company has been able to avoid major Covid-related supply chain challenges thanks to advanced planning."We...
© 2022 Venture Current is a Flag Media LLC Publication. All Rights Reserved.
VC is part of the FLAG Token rewards network. Clients and partners can use FLAG Tokens for VC products and services.
VC runs 'Automatic' software. Stories posted here come from generic-topic Google news RSS feeds as well as client and partner-approved content.
If a story appears on this page that needs to be deleted due to licensing issues, please message us immediately so we can help you.