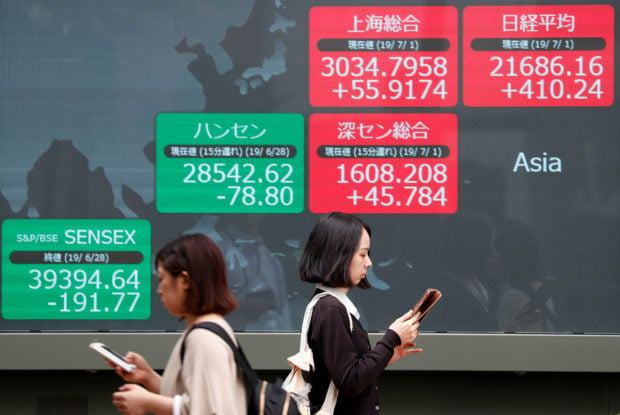 HONG KONG, China  -Most stocks dropped alongside oil prices Thursday and the dollar weakened after disappointing US data renewed worries about a recession in the world’s biggest economy.

The optimism that has flowed through trading floors since the start of the year has taken a knock this week as concern about inflation and rising interest rates are replaced by growth fears and their impact on company profits.

The downbeat mood overshadowed hopes that China’s economy will enjoy a strong recovery this year — having suffered its worst annual growth in 46 years in 2022 — as it moves away from its zero-Covid policy.

All three main indexes on Wall Street sank more than one percent Wednesday in response to figures showing retail sales, and shrank at the quickest pace in more than a year, while producer prices fell the most since the beginning of the pandemic.

While data indicating the economy was struggling has in recent months spurred equities on hopes it will allow the Federal Reserve to slow down its pace of rate hikes, analysts said traders are now concerned about the economic outlook.

The data “adds to the theme of the economy slowing and heading into recession in 2023, and pushes back on the soft landing narrative dominating markets since January”.

In early trade Tokyo, Hong Kong, Shanghai, Singapore and Manila all fell, though Sydney, Seoul and Jakarta edged up.

Wellington’s NZX 50 and the New Zealand dollar suffered only small losses despite Prime Minister Jacinda Ardern’s shock announcement that she will step down next month, saying she no longer has “enough in the tank”.

Expectations that US interest rates will not rise as much as previously feared weighed on the dollar, with the yen bouncing back strongly after Wednesday’s Bank of Japan decision not to further tweak monetary policy.

However, several Federal Reserve officials have pushed back against such speculation, warning they will continue to tighten policy until they have brought inflation down from its multi-decade highs.

Worries about recession were also weighing on oil prices, despite hopes for a spike in demand as China reopens to the world. Both main contracts dropped more than one percent in early exchanges.

But SPI Asset Management’s Stephen Innes said Asian investors could be in for a positive year.

“The clear message to start 2023 has been clear as a whistle: while last year was about Fed and ECB normalization, this year will be about China and Japan normalization, which should continue to drive Asia’s fortunes higher in 2023,” he said in a note.

News - December 22, 2021 0
Hoium: I'm maybe not the best example here. I'm not investing in retirement accounts specifically. I really value the liquidity of having a taxable...

News - October 11, 2022 0
The IMF has said there is a growing risk that the global economy will slide into recession next year as households and businesses face...

News - August 3, 2022 0
SINGAPORE — Asia-Pacific shares traded higher on Thursday following the rally on Wall Street and as investors move on from the tensions over U.S....
© 2022 Venture Current is a Flag Media LLC Publication. All Rights Reserved.
VC is part of the FLAG Token rewards network. Clients and partners can use FLAG Tokens for VC products and services.
VC runs 'Automatic' software. Stories posted here come from generic-topic Google news RSS feeds as well as client and partner-approved content.
If a story appears on this page that needs to be deleted due to licensing issues, please message us immediately so we can help you.