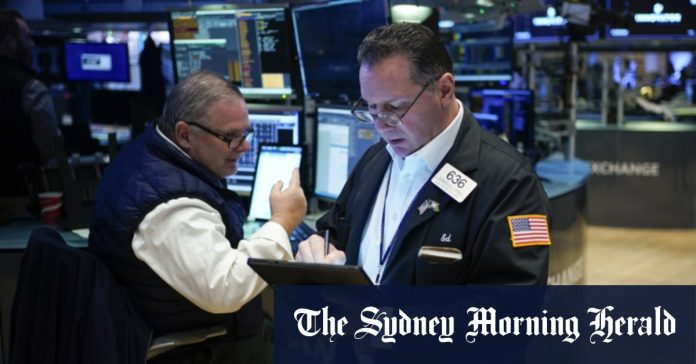 Gains for tech-oriented stocks accounted for a big share of the S&P 500’s rally Friday. Google’s parent company said it was cutting costs by laying off 12,000 workers, and Netflix reported a surge in its number of subscribers.

“When they started rocketing, then all the Nasdaq started moving, and that moves the S&P and everything else follows,” Hatfield said.

Alphabet rose 5.3 per cent after becoming the latest Big Tech company to acknowledge it expanded too quickly in recent years amid a boom created by the pandemic. Netflix jumped 8.5 per cent.

Also influencing the market on Friday: the expiration of $US797 billion ($1.14 trillion) in stock-option contracts. That’s the largest amount for single stock options since January 2022 and the fourth-largest on record, according to Goldman Sachs.

Treasury yields mostly rose, clawing backdrops from earlier in the week driven by worries about a weakening economy. The yield on the 10-year Treasury, which helps set rates for mortgages and other important loans, rose to 3.48 per cent from 3.40 per cent late Thursday.

The two-year yield, which tends to more closely track expectations for Fed action, rose to 4.19 per cent from 4.13 per cent.

The Nikkei 225 added 0.6 per cent after Japan reported that its consumer inflation rate hit 4 per cent in December, its highest level in 41 years. The high reading may add to pressures on the Bank of Japan to alter its longstanding policy of keeping its key interest rate at an ultra-low level of minus 0.1 per cent. But economists expect price pressures to ease in coming months as inflation elsewhere declines.

News - August 27, 2021 0
The Northern Virginia Association of Realtors reports the median price of a home that sold in Arlington County last month was 9% lower than...

News - September 12, 2022 0
The recovery in travel has refocused attention on the travel and lifestyle segment, as investors look to gain from the... Source

How the collapse of FTX is hitting sport

News - November 12, 2022 0
This article is an online version of our Scoreboard newsletter. Sign up here to get the newsletter sent straight to your inbox every SaturdayFootball’s...

News - November 19, 2022 0
Allwyn, the Czech-based company that is set to take over the UK National Lottery, has agreed to buy the current operator Camelot in a...
© 2022 Venture Current is a Flag Media LLC Publication. All Rights Reserved.
VC is part of the FLAG Token rewards network. Clients and partners can use FLAG Tokens for VC products and services.
VC runs 'Automatic' software. Stories posted here come from generic-topic Google news RSS feeds as well as client and partner-approved content.
If a story appears on this page that needs to be deleted due to licensing issues, please message us immediately so we can help you.