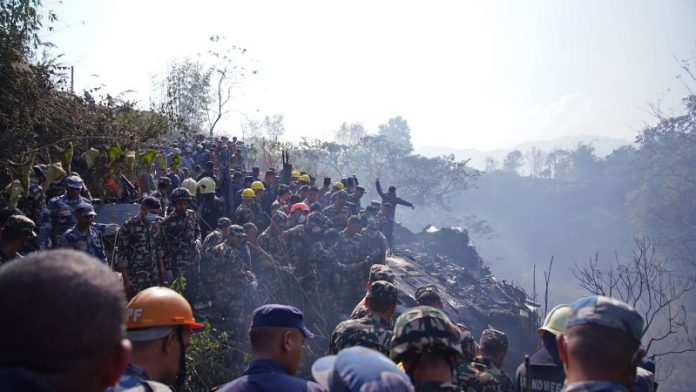 At least 32 people were killed on Sunday when an aircraft crashed near central Nepal’s Pokhara, an official said.

Seventy-two people – four crew members and 68 passengers – were on board the ATR-72 plane operated by Nepal’s Yeti Airlines when it crashed, state media outlet The Rising Nepal reported.

The district police and the district administration office are carrying out a rescue operation and hope to rescue at least a few survivors, said Tek Bahadur K.C., the chief district officer of Kaski.

He said 32 dead bodies were now in Gandaki Hospital.

The aircraft had been flying from the capital of Kathmandu to Pokhara, some 129 kilometers (80 miles) west of the capital.

“I sincerely appeal to the security personnel, all agencies of the Nepal government and the general public to start an effective rescue,” Dahal said on Twitter.

The Himalayan country of Nepal, home to eight of the world’s 14 highest mountains, including Everest, has a record of air accidents. Its weather can change suddenly and airstrips are typically sited in difficult-to-reach mountainous areas.

Last May, a Tara Air flight carrying 22 people crashed into a Himalayan mountain at an altitude of about 14,500 feet. That was the country’s 19th plane crash in 10 years and its 10th fatal one during the same period, according to the Aviation Safety Network database.

News - August 1, 2022 0
Check out what's clicking on FoxBusiness.com. An air traveler was recently fined nearly $2,000 by the Australian government for...

News - March 13, 2022 0
Iran has claimed responsibility for a missile barrage that struck early on Sunday near a sprawling US consulate complex in the northern Iraqi city...

Sony has a pending patent for a 3D scanner that puts real-world objects into...

News - January 9, 2022 0
Sony's patent for a 3D scanner that can put real-world objects into virtual reality isn't something new. In fact, the listing dates back to...
© 2022 Venture Current is a Flag Media LLC Publication. All Rights Reserved.
VC is part of the FLAG Token rewards network. Clients and partners can use FLAG Tokens for VC products and services.
VC runs 'Automatic' software. Stories posted here come from generic-topic Google news RSS feeds as well as client and partner-approved content.
If a story appears on this page that needs to be deleted due to licensing issues, please message us immediately so we can help you.