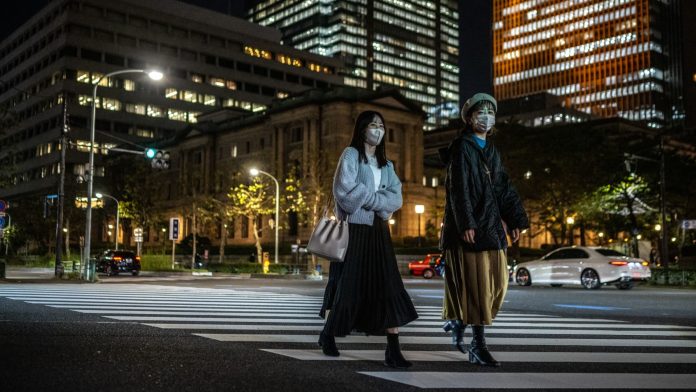 This picture taken on October 27, 2022 shows pedestrians walking in front of the Bank of Japan (BoJ) headquarters in Tokyo. (Photo by Philip FONG / AFP) (Photo by PHILIP FONG/AFP via Getty Images)

Japan’s central bank is due to meet this week amid soaring government bond yields and a strong yen, with a number of economists expecting it to scrap its yield curve control policy.

The move would come less than a month after the Bank of Japan caught markets off guard by widening its tolerance range for 10-year Japanese government bond yields. Since then, 10-year JGB yields have exceeded the upper ceiling of the new range — 50 basis points either side of its 0% target — a number of times.

Bank of America Global Research’s economists expect the BOJ to keep its benchmark rate unchanged at an ultra-dovish 0.1% on Wednesday, but said it could scrap the yield curve control policy altogether.

“Our base case is for a hold, but with low conviction, and see a significant risk that the central bank announces the end of Yield Curve Control (YCC) as the dysfunctions in the bond markets that prompted December’s YCC modifications have gotten significantly worse,” Chief Japan Economist Izumi Devalier and her team said in a recent report.

“Our client conversations suggest domestic investors now see YCC removal as a base case,” the economists wrote, adding that FX markets had already priced in such a move. They noted that it would likely be viewed by the market as similar to a rate hike.

While the central bank leaving interest rates unchanged would be positive for Japanese stocks, BofA said a removal of its yield curve control policy could lead to sharp declines.

“In our main risk scenario where the BoJ scraps YCC, we think that TOPIX could decline up to 3% in the near term, with key rate-sensitive sectors, such as banks, potentially outperforming,” economists wrote.

“We acknowledge lingering risk of the BoJ suddenly modifying or abolishing the YCC approach at each future meeting, including the January meeting,” Yamaguchi said, adding “the nature of the YCC makes it difficult for central banks to lay the ahead of time, in contrast to revision of the negative interest rate.”

HSBC, meanwhile, expects the central bank to announce further widening of the yield curve control tolerance band instead of abolishing the policy altogether.

Paul Mackel, HSBC’s global head of FX research, said the firm expects the central bank to widen the range to 75 basis points either side of its 0% target for the 10-year government bonds in the first quarter of 2023, before Governor Haruhiko Kuroda steps down in early April.

“As a result of the December revision, market participants need to take into account the risk of Mr. Kuroda suddenly changing his explanations,” he said, pointing to the governor’s somewhat confusing descriptions of widening the YCC band.

In September, Kuroda said that widening the tolerance range constituted “a rate hike or monetary tightening.” However, at the BOJ’s December briefing, Kuroda insisted the policy revision “was not a rate hike.”

“We think it is reasonable to assume that the Bank is currently at a stage of assessing the effect of this policy revision,” Yamaguchi said.

Market strategist Matt Simpson of City Index does not expect the removal of the Bank of Japan’s YCC as early as this week – but sees the central bank widening its inflation target from 2% to a range of 2-3% instead.

“I don’t think the BOJ will scrap their inflation target altogether, but they might announce a target range of 2-3%,” Simpson told CNBC.

“We know that the PM [Prime Minister Fumio Kishida] has been calling for more flexibility with the inflation target, and this seems like a plausible compromise from the BOJ,” he said.

Japan’s core inflation is expected to hit 4.0% for December, according to a Reuters poll — a 41-year-high, although still well below levels seen in comparable Western economies.

The central bank introduced its yield curve control mechanism in September 2016, with the intention of lifting inflation toward its 2% target after a prolonged period of economic stagnation and ultralow inflation.

Retail Traders are Buying the Dip, More Losses Ahead?

News - October 20, 2021 0
Lawson’s plan comes as the future of Social Security is in a state of flux. Government officials announced this summer the Old-Age and Survivors...

News - October 10, 2022 0
A toddler was left unscathed after sleeping through a horrific mass killing at a daycare center in the town of Uthai Sawan in Thailand...
© 2022 Venture Current is a Flag Media LLC Publication. All Rights Reserved.
VC is part of the FLAG Token rewards network. Clients and partners can use FLAG Tokens for VC products and services.
VC runs 'Automatic' software. Stories posted here come from generic-topic Google news RSS feeds as well as client and partner-approved content.
If a story appears on this page that needs to be deleted due to licensing issues, please message us immediately so we can help you.