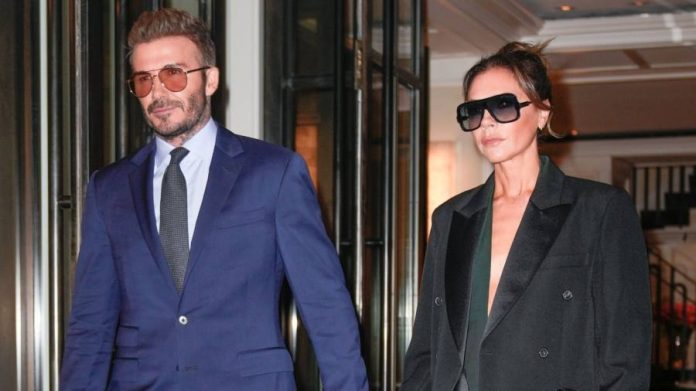 David and Victoria Beckham paid themselves £8.1mn from their business empire after an increase in revenues and profits driven by a string of commercial deals.

Beckham Brand Holdings, which includes their branding and fashion companies, reported net profits of £19.1mn on revenues of £34.3mn in 2021, up from £11.6mn and £11.4mn respectively the year before. Profit had exceeded revenue the previous year because of investment income generated largely from partnerships that is booked separately from revenue. The group paid £6.3mn in dividends to the celebrity couple during the period, plus a further £1.8mn more recently.

The holding company’s accounts covered the managing and licensing the David Beckham business and brand, its investment in Victoria Beckham’s lossmaking fashion and beauty business, and a stake in the Major League Soccer franchise Inter Miami.

The combination of revenue growth across the pair’s businesses and narrowing losses at Victoria Beckham Holding — co-owned by the couple and private equity firm NEO Investment Partners — shows how two of the world’s most famous people have navigated the coronavirus pandemic. Accounts for the year ending December 2021 are due to be published at Companies House.

Separately, the fashion and beauty group’s annual revenues grew by 13 per cent to £40.9mn and it slashed net losses from £8.6mn to £5.8mn. Despite the increase in sales and a reduction of day-to-day costs, the accounts warned that “further support will be required from its shareholders”. Chief executive Marie Leblanc said the business was set to report stronger figures for 2022.

“We have entered a new chapter and our energy is focused on accelerating growth and taking the brand to its full potential,” she said.

Meanwhile, David Beckham’s commercial and sponsorship ventures posted revenues of £34mn, up from £11.4mn in 2020, while net profits increased to £19.6mn from £10.6mn. The BBH revenues closely resemble DV Ventures’ own because the Victoria Beckham business was treated as “an associate” in the accounts for the holding company.

Despite ending his playing career more than nine years ago, the footballer was one of the faces of the Fifa World Cup, selected as an ambassador by host Qatar. The 2021 numbers do not include the Qatar deal, according to a person close to the Beckhams. Although the ex-England captain came under fire for aligning himself with a country associated with human rights violations, Beckham won plaudits in the UK for queueing with members of the general public to pay respects to the late Queen Elizabeth II when she was lying in state.

Beckham, who negotiated an option to buy a Major League Soccer franchise when he played in the US, co-owns Florida-based football club Inter Miami. The FT reported in November that Beckham was open to holding talks with potential bidders about a possible sale of his former club, Manchester United.

The ultimate shareholder of Beckham Brand Holdings is David Beckham through his Footwork Productions entity. However, a business reorganisation, including the Authentic Brands deal, means that BBH no longer holds direct investments in DB Ventures or Victoria Beckham Holdings.

The Guardian view on an energy price shock: a crisis in the making |...

News - September 20, 2021 0
There is a level of government complacency about energy price shocks. Ministers think the best course of action is to just accept them. Wholesale...

News - September 4, 2021 0
Pollution updatesSign up to myFT Daily Digest to be the first to know about Pollution news. Two years ago, Denis Bukalov mobilised support on social...
© 2022 Venture Current is a Flag Media LLC Publication. All Rights Reserved.
VC is part of the FLAG Token rewards network. Clients and partners can use FLAG Tokens for VC products and services.
VC runs 'Automatic' software. Stories posted here come from generic-topic Google news RSS feeds as well as client and partner-approved content.
If a story appears on this page that needs to be deleted due to licensing issues, please message us immediately so we can help you.