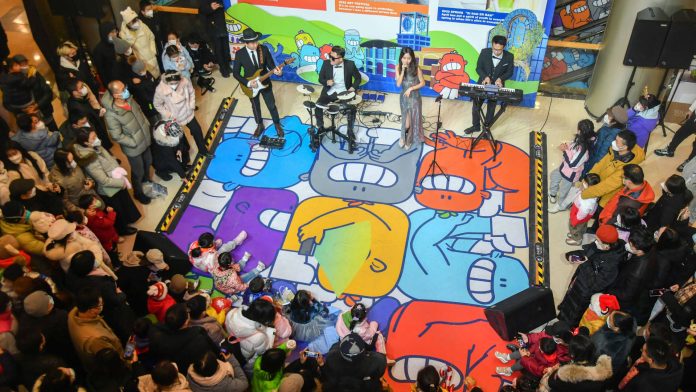 Crowds gather to watch a band perform at the Solana mall in Beijing on Christmas Eve 2022, as the city recovers from a Covid wave.

BEIJING — People are returning to the streets in China’s capital city as it emerges from a wave of Covid infections.

During the Monday morning rush hour, traffic in Beijing surged by about 90% from a week ago — to “heavily congested” levels, according to Baidu data.

Over the weekend, ticket orders for Beijing city attractions doubled from the prior week, according to data cited by Chinese business news site 21st Century Business Herald. CNBC was unable to verify the figures.

Anecdotally, foot traffic at malls and Universal Beijing Resort’s CityWalk over the weekend was up significantly to modestly crowded levels. Not all stores have reopened yet. Christmas is not a public holiday in mainland China, but often celebrated by younger people.

In contrast to the surge in Beijing city traffic, Shanghai and Shenzhen still saw very low levels of congestion Monday morning, the Baidu data showed. The two cities started to see a wave of Covid infections after Beijing did.

The rebound in social activity in Beijing over the last few days is an example of how long it might take for the country to shake off the economic impact of zero-Covid controls.

A month ago, Beijing residents were dealing with a surge in apartment lockdowns and subsequent public protests. In early December, municipal and central authorities abruptly ended many Covid controls amid a surge in infections.

The share of severe Covid cases and elderly patients has increased, the report said. It cited a director at a local hospital as saying the share of visits by the elderly had climbed from below 20% to nearly 50%.

China’s elderly have lower Covid vaccination rates and often have underlying health conditions that make them more vulnerable to the virus. Anecdotally, deaths have ticked up.

However, there are fewer and fewer official disclosures. China’s National Health Commission on Sunday stopped sharing daily figures on Covid infections and deaths, ending a practice of nearly three years.

One of the official arguments for maintaining strict Covid controls was that the already stretched national health system would struggle to handle a surge in infections.

Despite the lack of national-level public data, Zhejiang province — bordering Shanghai —shared Sunday some of the most detailed official numbers on Covid.

The province said daily Covid infections in the region have surpassed 1 million, and will likely double to a peak of 2 million a day around New Year’s. The province has a population of about 65.4 million, more than 70% of which live in cities such as Hangzhou, home to Alibaba.

Zhejiang said fever clinics in the province have a maximum daily capacity of 600,000. Authorities said that among larger hospitals in the province, there were more than 12,000 intensive care unit beds, or 9.9% of open beds.

Monday morning traffic in Hangzhou was very light, according to Baidu data.

Travel on the rise

While people are staying home in some parts of China as infections surge, other areas in addition to Beijing are seeing a recovery in social activity.

The southwestern cities of Chengdu and Chongqing saw large jumps in road traffic to congestion levels as heavy as Beijing’s, Baidu data showed.

As of Thursday, Trip.com said cross-provincial travel bookings for the upcoming New Year’s Day holiday were up by 34% from a year ago. The company said the top 10 popular tourist cities included Shanghai, Beijing, Chengdu, Hangzhou and the resort city of Sanya.

Already on Dec. 15, passenger trips at Sanya’s airport exceeded 36,000 —the highest since August, the local tourism board said.

Before the Chinese government relaxed domestic travel restrictions on Dec. 7, people tended toward nearby staycations to avoid the risk of being stranded far from home due to Covid policies.

Disclosure: Comcast is the owner of NBCUniversal, parent company of CNBC.

Dangerous to buy the dip on growth stocks

Stock futures fall slightly ahead of earnings and inflation report

Biden warns of ‘long fight ahead’ against Russian aggression

News - March 26, 2022 0
US president Joe Biden warned transatlantic democracies to steel themselves for a “long fight ahead” and remain united to stop Russia and its president...

News - August 11, 2021 0
Medical workers with Delta Health Center wait to vaccinate people at a pop-up Covid-19 vaccination clinic in this rural Delta community on April 27,...
© 2022 Venture Current is a Flag Media LLC Publication. All Rights Reserved.
VC is part of the FLAG Token rewards network. Clients and partners can use FLAG Tokens for VC products and services.
VC runs 'Automatic' software. Stories posted here come from generic-topic Google news RSS feeds as well as client and partner-approved content.
If a story appears on this page that needs to be deleted due to licensing issues, please message us immediately so we can help you.