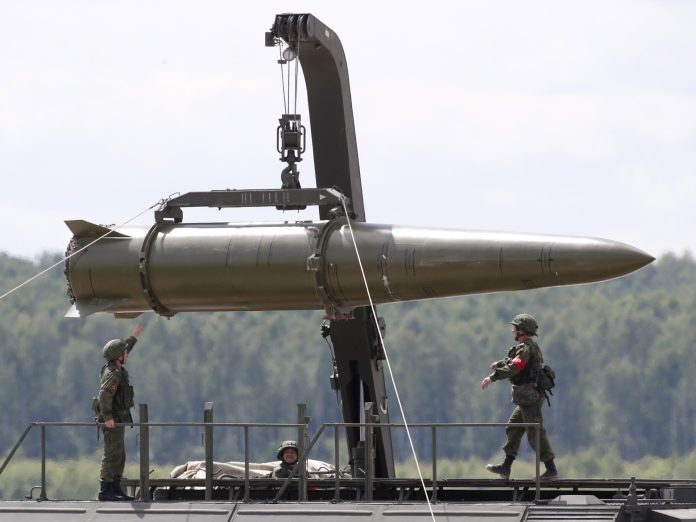 Deployment of weapons comes amid Moscow’s increasing pressure on Minsk to aid its invasion of Ukraine.

The Iskander tactical missile systems and the S-400 air defence systems that Russia has deployed to Belarus are fully prepared to perform their intended tasks, a senior Belarusian official has said.

“Our servicemen, crews have fully completed their training in the joint combat training centres of the armed forces of the Russian Federation and the Republic of Belarus,” Leonid Kasinsky, head of the Main Directorate of Ideology at the Belarusian defence ministry, said in a video posted online on Sunday.

“These types of weapons [Iskander and S-400 systems] are on combat duty today and they are fully prepared to perform tasks for their intended purpose.”

It is unclear how many of the Iskander systems — capable of carrying nuclear weapons — have been deployed to Belarus after Russian President Vladimir Putin said in June that Moscow would supply Minsk with the Iskander and the air defence systems.

The news comes amid Moscow’s increasing pressure on Minsk to aid its invasion of Ukraine, now in its 10th month and with no end in sight.

Russian forces used Belarus as a launch pad for their abortive attack on the Ukrainian capital, Kyiv, in February, and there has been a growing flurry of Russian and Belarusian military activity in recent months.

The Iskander-M, a mobile guided missile system code-named “SS-26 Stone” by NATO, replaced the Soviet “Scud”. Its two guided missiles have a range of up to 500km (300 miles) and can carry conventional or nuclear warheads.

News - November 22, 2022 0
The European Union’s foreign policy chief has warned of “escalation and violence” after emergency talks between Kosovo and Serbia failed to resolve their long-running...

News - October 13, 2021 0
Stock futures opened little changed Wednesday evening after another choppy session in the markets, with another batch of bank earnings and labor market and...

News - March 4, 2022 0
Apple is reportedly working on a new ‘folded’ camera technology that will allow users to enhance the zoom capabilities of their phones. As per...

The Bear Market Is Still on the Prowl

AMTD Digital issues ‘thank you note’ to investors as stock trades about 23,650% above...

News - August 2, 2022 0
The U.S.-listed shares of Hong Kong-based investment holding company AMTD IDEA Group ...
© 2022 Venture Current is a Flag Media LLC Publication. All Rights Reserved.
VC is part of the FLAG Token rewards network. Clients and partners can use FLAG Tokens for VC products and services.
VC runs 'Automatic' software. Stories posted here come from generic-topic Google news RSS feeds as well as client and partner-approved content.
If a story appears on this page that needs to be deleted due to licensing issues, please message us immediately so we can help you.