Sign up to myFT Daily Digest to be the first to know about EU immigration news.

Attempts by Belarus to destabilise the EU by facilitating illegal immigration into member states show that western sanctions against Minsk are working and its pariah dictator Alexander Lukashenko is “desperate”, the bloc’s top migration official has said.

Thousands of illegal migrants, mostly Iraqi citizens, have crossed into the EU from Belarus this year after flying to Minsk and being transported to the border with Lithuania, in what European officials say is a co-ordinated initiative by Lukashenko to hit back at Brussels.

The surge of migrants has raised the issue of EU border protection just as concerns rise over the fallout from the growing conflict in Afghanistan after the withdrawal of US troops there. Six EU member states have written to Brussels warning against halting deportations of Afghan asylum seekers despite the rapid advance of Taliban militants.

“I am very worried about the situation in Afghanistan. It seems like it is deteriorating almost every hour of every day,” Ylva Johansson, the European commissioner for home affairs, told the Financial Times. “There seems a huge risk that a lot of Afghani people will not be safe in their own country. And that could make them refugees, of course.”

“But this is something totally different from Lukashenko using people who are probably not refugees,” she added.

The EU placed sanctions on Minsk in June in response to Lukashenko’s brutal and bloody crackdown against Belarusians who took to the streets to protest against his fraudulent re-election a year ago. On Monday, Canada, the UK and US also imposed sanctions in a co-ordinated move.

“What Lukashenko is trying to do is destabilise the EU, and he is using human beings in an act of aggression,” Johansson said. “The sanctions actually hurt him, so he tries to do things to counter that.”

“To me it is a clear link between the sanctions and him being desperate. He has nothing left, except violence,” she said. “He is trying to threaten [us] because we have been tough on fundamental rights, on the right for Belarusian people to have free and fair elections . . . When you are using human beings, that is the worst.”

Lukashenko on Monday said Belarus would always retaliate when attacked, adding that sanctions backfire, as “shown by the reality of today’s events” on the country’s borders.

Illegal crossings into Lithuania have fallen in recent days, helped by a decision by Iraq — under pressure from Brussels — to suspend flights to Belarus. But on Monday neighbouring Latvia said it would declare a state of emergency on its border and build a fence, while Poland said it had detained a record 349 illegal immigrants from Belarus since Friday.

The EU has already sent Frontex border guards to Latvia, Johansson said, and the European Commission was “ready to step up if necessary” if Poland and Latvia needed more support.

“It is pretty clear that this is the way that Lukashenko is using human beings against Lithuania, against Poland, against Latvia and against the EU,” she said. “It is obvious and clear that he is not only a threat to his own people, but to others.”

Organised illegal migration has been a top concern for the EU since 2015, when almost 2m people, primarily refugees from the war in Syria, entered the bloc, creating a divisive social issue that was exploited by many extremist political parties. 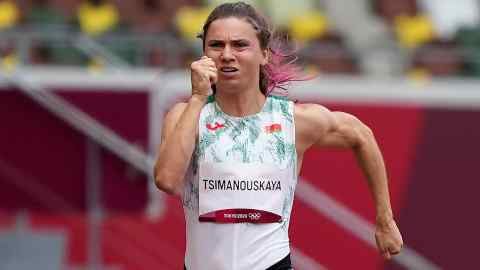 Since then, Turkish president Recep Tayyip Erdogan and Russia’s Vladimir Putin have both been accused of threatening the EU with a new wave of mass migration.

“There are some similarities of using migrants, human beings, instrumentalising them,” Johansson said when asked whether Lukashenko had learned from those threats. “But there are also important differences: What Lukashenko is doing is letting people in [from third countries] on false information . . . These are not people living in Belarus, or refugees Belarus is hosting.”

It is a different situation from that in Afghanistan, where Taliban militants have made major advances, capturing a sixth provincial capital on Monday.

Denmark, Germany, Austria, Belgium, the Netherlands and Greece wrote last week to Johansson and Margaritis Schinas, vice-president of the commission, urging them not to pause the return of Afghans who failed to gain asylum in the EU despite the conflict in their home country.

A suspension of forced repatriation is “likely to motivate even more Afghan citizens to leave their home for the EU,” they wrote.

Apple Stock: You Have Been Warned (NASDAQ:AAPL)

News - October 24, 2022 0
Declining demand and the implications for near-term results As I have stated in my previous article that the low-end iPhone 14 demands have...

Wipeout Rush announced for Android and iOS (not PS5)

Fantasian is a Genuine Killer App for Apple Arcade

News - August 15, 2021 0
It’s easy to forget about Apple Arcade. With a sudden influx of gaming services in the past few years, Apple’s mobile gaming platform has...

News - November 18, 2022 0
On the morning of July 6, Boris Johnson was beavering away in his private study preparing for what was undoubtedly going to be a...

News - January 3, 2022 0
U.S. stocks opened slightly higher Monday, kicking off the new year on a positive note...
© 2022 Venture Current is a Flag Media LLC Publication. All Rights Reserved.
VC is part of the FLAG Token rewards network. Clients and partners can use FLAG Tokens for VC products and services.
VC runs 'Automatic' software. Stories posted here come from generic-topic Google news RSS feeds as well as client and partner-approved content.
If a story appears on this page that needs to be deleted due to licensing issues, please message us immediately so we can help you.