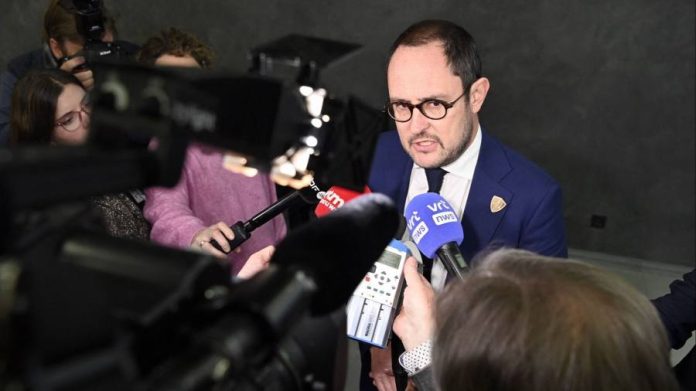 The magnitude of the probe into allegations of bribery involving members of the European parliament is of a scale usually seen in major investigations into organised crime, said Belgium’s justice minister.

Vincent Van Quickenborne told the Financial Times that the investigation, led by the Belgian federal prosecutor, involved “interference by state actors in the heart of our European democracy” of a magnitude Belgium had not seen before. He added that the facts of the case, which has shaken the Brussels establishment, still needed to be proven.

The investigation, which began in March 2021, has so far led to the arrest of four suspects, who have been charged with corruption, money laundering and participation in an organised crime group. Police have seized €1.5mn in cash from three of those suspects’ locations. The case implicates lawmakers, non-governmental organisations, and foreign powers Qatar and Morocco.

“We know of cases of interference by state actors that try to interfere in our democratic system. And also organised crime,” Van Quickenborne told the FT. “But really, bribing members of a parliament, especially the European parliament, that is quite unique for our civil intelligence service.”

Belgium’s intelligence service was co-operating with several other European intelligence agencies on this case, leading to comparisons with a joint probe last year by police in Belgium, France and the Netherlands to crack the encryption software SKY ECC used by drug lords and other criminals to communicate without their messages getting intercepted.

The SKY ECC probe led to more than 1,000 arrests in Belgium alone, with hundreds of suspects in prison, and is one of the reasons Van Quickenborne is currently under police protection. Earlier this year, the justice minister received death threats and an attempt to kidnap him was foiled by police.

Van Quickenborne said the current corruption investigation showed that Belgium, which hosts several EU institutions, as well as Nato, does not give “free passes” to alleged criminals. “For us, safeguarding the rule of law is the most important thing,” he said, adding that this meant the investigation should go on without any “interference whatsoever” from the Belgian government.

“This is a very specific case of interference by bribery and it is quite a novelty for our country,” he said, adding that the last big political corruption scandal involving foreign actors was in the 1990s, when several Belgian politicians — including then-Nato secretary-general Willy Claes — were convicted for taking bribes from Italian aircraft maker Agusta.

Van Quickenborne said co-operation with the European parliament had so far been mostly about security, particularly since the 2016 terror attacks at Brussels airport and a metro station in the European quarter. “Now we should secure ourselves against organised crime and interference by bribery,” he said.

He said that the Belgian government has recently invested in more staff and electronic equipment for the intelligence service, as well as the anti-corruption unit with federal police.

“We have given all the possible means and personnel for the case,” he said. “Every stone will be lifted and nothing will stay untouched.”

Stocks slammed by ‘chain reaction’ — here’s what pros are saying

News - May 19, 2022 0
Horror has returned to Wall Street trading desks and the portfolios of the average investor."Wednesday's sell-off really seems like a chain reaction, with the...

With inflation and Ukraine, Powell must thread a needle on Capitol Hill this week...

Mando and Grogu reunite in The Mandalorian season 3 trailer

News - January 17, 2023 0
Din Djarin (Pedro Pascal from The Last of Us) and Grogu reunite and navigate the galaxy in the new trailer for The Mandalorian season 3,...

News - May 21, 2022 0
Anthony Albanese is on track to become Australia’s first Labor prime minister in nine years, after Scott Morrison’s conservative Liberal-National coalition government failed to...
© 2022 Venture Current is a Flag Media LLC Publication. All Rights Reserved.
VC is part of the FLAG Token rewards network. Clients and partners can use FLAG Tokens for VC products and services.
VC runs 'Automatic' software. Stories posted here come from generic-topic Google news RSS feeds as well as client and partner-approved content.
If a story appears on this page that needs to be deleted due to licensing issues, please message us immediately so we can help you.