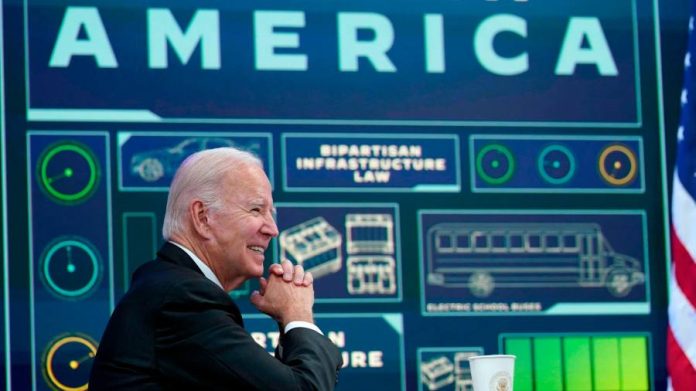 Joe Biden was in a celebratory mood as he stepped on to the South Lawn of the White House this month sporting his trademark aviator sunglasses.

That morning the latest monthly inflation data had shown price increases slowing more rapidly than expected across the US economy. And a few hours later, to a performance of “True Colors” by singer Cindy Lauper and surrounded by applauding members of Congress from both parties, he was signing bipartisan legislation to protect same-sex marriage across the country.

“It’s been a long road, but we got it done. And we’re going to continue the work ahead, I promise you,” Biden said.

The outdoor ceremony at the White House on December 13 capped what has been a remarkably upbeat end to the year for Biden, including a better than expected performance for Democrats in the midterm elections, the release of Brittney Griner, the US basketball star detained in Russia, and the announcement of a new multibillion-dollar investment in semiconductor manufacturing in the swing state of Arizona.

What might have been a devastating year for Biden’s presidency — including grappling with Russia’s war in Ukraine, persistently high inflation, infighting among Democrats over key legislation, and what many feared would be a drubbing in the midterm elections — is instead ending on a high note for the White House.

This has put Biden, who turned 80 last month, in a better position to decide whether to seek re-election in 2024. An announcement by the president on his political future is expected early next year, but his recent successes have hushed some of the Democratic voices calling on him to step aside, given his age.

There isn’t a huge clamouring within the American public for this particular leader, there is [just] a clamouring for the normalcy that he brought

“The productiveness of his administration in partnership with Congress is just undeniable in the context of a national narrative which is some version of ‘everything is going to hell in a handbasket’,” says Tina Smith, the Democratic senator from Minnesota. She added that she would expect any president who had Biden’s “record of accomplishment” to seek another term and she would back him if he did.

“He’s led the party and fought for issues that are much more aligned with where middle-of-the-road voters are than the Republican party is,” adds Joel Benenson, a Democratic pollster who worked for Barack Obama.

Biden’s approval ratings have improved in recent months though they remain underwater. According to the Realclearpolitics.com polling average, 52 per cent of Americans disapprove of his performance as president, whereas 43 per cent approve of the job he is doing. That gap of nine percentage points is far narrower than it was at the trough of Biden’s popularity in July of this year but will remain a concern for the White House and Democrats.

“There isn’t a huge clamouring within the American public for this particular leader, there is [just] a clamouring for the normalcy that he brought, to a certain extent,” says Jeffrey Engel, founding director of the Center for Presidential History at Southern Methodist University in Texas.

Some of the most encouraging news for Biden in recent months has come on the economic front. In addition to the deceleration in the consumer price index, US jobs growth has continued to remain solid, damping concerns that a recession triggered by the Federal Reserve’s aggressive monetary tightening is around the corner. In their latest economic projections published this month, Fed officials predicted higher unemployment, higher inflation and higher interest rates in 2023. But they are still expecting the US economy to keep growing albeit at a sluggish pace of 0.5 per cent — and to speed up again in 2024.

“The positive economic news shows us that we have been on the right path and the policy decisions have been the right decisions,” says Smith, the Minnesota senator.

On the foreign policy front, Biden concluded the year by hosting a state visit for French president Emmanuel Macron — an emblem of the western unity he had helped forge against Vladimir Putin after Russia’s attack on Ukraine. Even though this had little domestic political impact, it helped cement faith in his national security team after the botched withdrawal from Afghanistan during his first year in office.

“Joe Biden grew up in the cold war, in the shadow of Harry Truman and some of the achievements that helped keep the peace for years — he came through and stood tall even if there was some hesitation at the beginning,” said Alvin Felzenberg, a historian and a former official on the US government’s commission to investigate the 9/11 terrorist attacks. “He’s worked very hard to restore confidence with the allies,” Felzenberg added.

As he looks to the 2024 decision, Biden will want to avoid two disturbing precedents. The first is an internal primary challenge that would trigger divisions among Democrats and imperil his general election chances, such as those that helped doom Gerald Ford in 1976, Jimmy Carter in 1980 and George HW Bush in 1992. But if Biden does decide to step aside, he will want to do so early enough to allow potential Democratic successors to mount successful campaigns, unlike Lyndon Johnson’s late announcement in 1968, which paved the way for Richard Nixon to win the White House.

But after a year in which Biden disarmed and confounded critics both inside and outside his party, the belief in the White House is that the president holds the best political cards he has in months.

News - October 9, 2021 0
The EU must still make significant changes to the contentious Northern Ireland protocol if the arrangement is to survive, the UK’s Brexit minister will...

News - January 27, 2023 0
BEIJING — Travelers from mainland China stuck close to home in Asia during the Lunar New Year, the first holiday after Beijing relaxed its...

News - May 21, 2022 0
The past few weeks have been momentous for regulation of internet disinformation and misinformation (D&M): Elon Musk agreed to purchase Twitter largely to change...

News - November 6, 2021 0
At least 98 people were killed when a tanker truck exploded on Friday night after a crash in the capital of Sierra Leone.Many of...
© 2022 Venture Current is a Flag Media LLC Publication. All Rights Reserved.
VC is part of the FLAG Token rewards network. Clients and partners can use FLAG Tokens for VC products and services.
VC runs 'Automatic' software. Stories posted here come from generic-topic Google news RSS feeds as well as client and partner-approved content.
If a story appears on this page that needs to be deleted due to licensing issues, please message us immediately so we can help you.