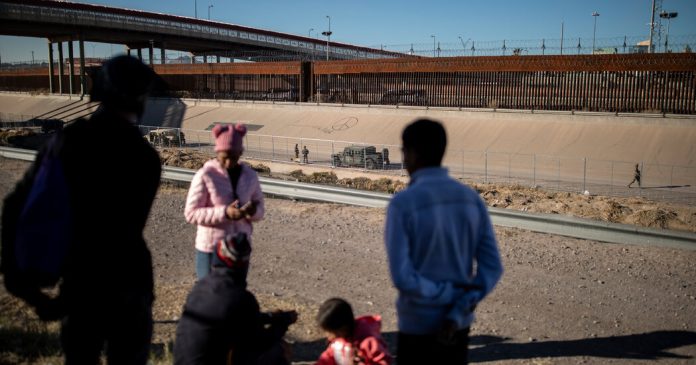 WASHINGTON — The Biden administration said on Wednesday that border enforcement measures it rolled out this month had led to a decline in the number of illegal crossings on the southern border, claiming success for policies that have drawn criticism from Republicans and even some Democrats.

On Jan. 5, the administration said it would deny people from Cuba, Nicaragua, Venezuela and Haiti the chance to apply for asylum if they cross the Mexican border without authorization between official ports of entry. Often fleeing economic and political hardship, Cubans and Nicaraguans, in particular, had been crossing in large numbers in recent months, but the United States had not been able to expel them because of diplomatic restraints with those countries’ governments.

The record-breaking surges of migration at the southern border are part of a mass migration trend that has often overwhelmed the resources of border officials and communities and drawn relentless attacks from Republicans on President Biden’s border policies.

Previously, migrants from those countries had been allowed to stay in the United States temporarily. But the administration can now expel them because Mexico has agreed to accept migrants from Cuba, Haiti and Nicaragua removed from the United States under the public health authority known as Title 42. Mexico had started accepting Venezuelan expulsions in October.

The Homeland Security Department said the number of times Cubans, Nicaraguans, Haitians and Venezuelans were caught crossing illegally fell 97 percent — from a seven-day daily average of 3,367 on Dec. 11 to 115 on Jan. 24. The department said the new measures put January on track to have significantly fewer illegal crossings overall than December, which set a record.

In addition to expanding its use of Title 42, which was originally implemented as a response to the coronavirus pandemic, the Biden administration also created legal pathways for people from those countries for a two-year humanitarian parole to the United States, including the ability to apply for work authorization immediately.

“These expanded border enforcement measures are working,” the homeland security secretary, Alejandro N. Mayorkas, said in a statement on Wednesday, a day after 20 Republican-led states filed a lawsuit opposing the new legal pathways, calling them “a new visa program that allows hundreds of thousands of aliens to enter the United States who otherwise have no basis for doing so.”

On a background call with reporters on Wednesday, administration officials said Republican opposition to the measures suggested that the G.O.P. was not interested in solving problems at the southern border.

“It is incomprehensible that some states who stand to benefit from these highly effective enforcement measures are seeking to block them and cause more irregular migration at our southern border,” Mr. Mayorkas said in the statement.

Immigration advocates have also been critical of the administration’s latest measures because it leads to more restrictions to asylum.

How Times reporters cover politics. We rely on our journalists to be independent observers. So while Times staff members may vote, they are not allowed to endorse or campaign for candidates or political causes. This includes participating in marches or rallies in support of a movement or giving money to, or raising money for, any political candidate or election cause.

“Rather than erecting barriers to asylum, we should be efficiently processing asylum claims, we should be protecting people and their due-process rights,” Vanessa Cárdenas, the executive director of America’s Voice, a pro-immigration group, said in a Twitter post.

Since Jan. 6, about 1,400 Cubans, 280 Haitians and 44 Nicaraguans have arrived in the United States under the new pathway, according to internal data shared with The New York Times. About 14,700 Venezuelans have come into the country on the parole program since Oct. 18. To qualify, migrants must have a sponsor in the United States who can support them for two years. The sponsor submits the application to the U.S. government to start the process.

In October, the Biden administration rolled out a similar program for Venezuelans and achieved a comparable drop in Venezuelans crossing the border illegally. Officials did not say on Wednesday how many Venezuelans had come to the United States through the program since it was created.

Some Democrats and immigration advocates have been critical of the measures, questioning why the administration would expand its use of an enforcement policy that it has determined is no longer needed for the pandemic.

Since Mr. Biden has been in office, the southern border has seen a historic spike in illegal migration, with many people fleeing violence and persecution in hopes of seeking asylum in the United States. The pandemic-era health measure, which already applied to immigrants from most countries, has been used more than 2.4 million times to expel migrants who crossed into the United States illegally, according to government data.

The Biden administration has tried to end its use of the rule twice — once in May and again in December — but was blocked from doing so by court orders. In December, the Supreme Court kept Title 42 in place for now.

Mexican officials say they are similarly pleased with the new U.S. border measures. In an opinion piece published this week in a Mexican publication, Roberto Velasco, the country’s foreign ministry’s chief officer for North America, trumpeted the decrease in illegal migration in both Mexico and the United States.

“The measures announced by the U.S. have begun to yield important results with the dual objective of opening pathways for regular migration and also considerably reducing the risks associated with irregular migration flows,” Mr. Velasco wrote in Spanish.

Beginning Jan. 12, the Biden administration opened another avenue to migrants from any country seeking refuge in the United States by allowing them to use a smartphone application, known as CBP One, to apply for a humanitarian exception to the public health rule. Migrants who apply must make an appointment to arrive at specific ports of entry to interview with Customs and Border officials.

Previously, the CBP One process was open only to migrants who were recommended by a nonprofit organization, which applied on their behalf. From May to December, more than 109,000 migrants entered the United States this way. The administration has not expanded the number of appointments it is offering, which stand at about 20,000 a month. Currently, the application is available only in Spanish and English, leaving thousands of migrants unable to use it.

Immigration advocates working with migrants in Mexico and the United States say the system leaves the neediest migrants — the ones who do not have smartphones or cannot afford to stay in Mexican hotels with internet access — at a disadvantage.

“CBP One, is turning out to be as awful as we predicted,” one advocacy organization, Al Otro Lado, wrote in a Twitter post on Tuesday. Migrants with resources like a smartphone and Wi-Fi “are the ones getting appointments, not the most vulnerable.”

News - July 3, 2022 0
Millions of UK consumers are currently embroiled in Britain’s biggest ever “class action” lawsuit — even if they don’t yet realise it.Walter Merricks, the...

News - March 3, 2022 0
Bitcoin and cryptocurrencies have won their fair share of supporters from the world of Wall Street over the last year. Subscribe now to Forbes' CryptoAsset &...

Canadians vote in election that could cost Trudeau his premiership

News - September 20, 2021 0
Canadians voted Monday in a tight pandemic election that threatens to weaken Prime Minister Justin Trudeau or even knock him from power.Trudeau gambled on...

Japan's economy bounced back ahead of the Olympics, data shows

News - August 16, 2021 0
Analysts have warned recovery will be modest this quarter after a state of emergency was re-imposed. Source
© 2022 Venture Current is a Flag Media LLC Publication. All Rights Reserved.
VC is part of the FLAG Token rewards network. Clients and partners can use FLAG Tokens for VC products and services.
VC runs 'Automatic' software. Stories posted here come from generic-topic Google news RSS feeds as well as client and partner-approved content.
If a story appears on this page that needs to be deleted due to licensing issues, please message us immediately so we can help you.