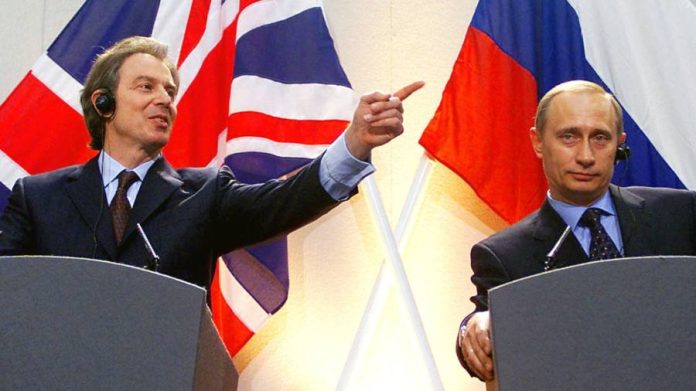 Tony Blair sought to encourage Vladimir Putin to adopt western values in the belief that the new Russian president was at heart a “Russian patriot” worthy of a seat at the international “top table”, according to newly released official files.

This was despite the serious reservations that senior British civil servants were expressing at the time about whether the former KGB intelligence officer could be trusted.

The papers, released this week to the National Archives in Kew, show the prime minister’s efforts to woo Putin in the early days of his presidency when the Russian war in Chechnya was raging, and persuade western allies to do the same.

A February 2001 memo, recounting a meeting between the then UK prime minister and US vice-president Dick Cheney, records Blair describing Putin as a “Russian patriot” with a “similar mindset” to former French president Charles de Gaulle.

“He [Blair] understood that Putin had a low approval rating in the US. But he thought it was better to allow Putin a position on the top table and encourage Putin to reach for western attitudes as well as the western economic model,” the note said.

It added that Blair, advising on US missile defence plans, thought “that the best response from Putin was likely to be gained by treating him with some respect while preventing him from pulling European members of the [Nato] alliance away from the US”.

The papers also show that in the run-up to the state visit lavished upon Putin in 2003, Downing Street considered Russian proposals for a gas pipeline supplying the Netherlands, Sweden and the UK via Belarus.

Putin told Blair that this “would be a major undertaking but would ensure stable supplies for decades to come”, according to an account of a 2001 meeting between the two men in Moscow.

Behind the scenes officials were concerned that the Russian president brought with him the baggage of the cold war and was failing to honour the many commitments he made to the British premier at international summits.

A 2001 Downing Street briefing note entitled “Putin’s progress” said that despite “the warmth of Putin’s rhetoric about the close links” between the two countries, there had been a resurgence in Russian espionage against the UK.

“The Russian intelligence presence in the UK is at cold war levels, and they continue to try to post active and hostile officers to work against British interests worldwide,” it said.

The document lists a string of false assurances given by Putin to Blair including that Moscow would cease supplying Iran’s nuclear programme and would support the west’s hardline approach to dealing with the Iraqi dictator Saddam Hussein.

Putin told the prime minister he did not want to be considered to be “anti-Nato”, it said, and “would not try to slow down the process of Nato enlargement”.

Yet Russian officials were taking a generally “obstructionist stance” and defence minister Marshal Igor Sergeyev was warning the alliance that further enlargement would be “a major political error”.

Silvio Berlusconi matched Blair’s early enthusiasm for the Russian president, according to a British account of a 2002 Nato meeting in Rome. At the meeting the Italian premier suggested Nato leaders should “delegate Putin to speak on their behalf” to the Indian and Pakistani leaders at a forthcoming meeting in Kazakhstan and as part of international efforts to prevent the two nuclear powers from coming to blows.

Condoleezza Rice, then US secretary of state, described this as a “terrible idea”.

Fed: On track to slow support for economy later this year

News - September 22, 2021 0
WASHINGTON -- Federal Reserve Chair Jerome Powell signaled Wednesday that the Fed plans to announce as early as November that it will start withdrawing...

Analysis | Powell Is Fighting for the Minds of the People

News - September 20, 2021 0
If people start to doubt the Fed’s inflation-fighting credibility, his job will get a lot harder. Source

News - April 21, 2022 0
Here’s why “funding secured” is rising fast on Twitter’s trending list: Elon Musk has outlined how he might be able pay for control of...

News - June 26, 2022 0
Placeholder while article actions loadQUITO, Ecuador — Ecuadorian President Guillermo Lasso on Saturday lifted a state of emergency he’d imposed in six provinces amid...
© 2022 Venture Current is a Flag Media LLC Publication. All Rights Reserved.
VC is part of the FLAG Token rewards network. Clients and partners can use FLAG Tokens for VC products and services.
VC runs 'Automatic' software. Stories posted here come from generic-topic Google news RSS feeds as well as client and partner-approved content.
If a story appears on this page that needs to be deleted due to licensing issues, please message us immediately so we can help you.