Boris Johnson faced renewed pressure on his leadership on Friday after the Conservatives suffered significant defeats in local elections across the UK, including big losses in London.

But gains by the opposition Labour party were overshadowed by an announcement by Durham Police that it was investigating “potential breaches” of Covid-19 regulations during a gathering in April 2021 involving leader Sir Keir Starmer.

Labour seized the prime minister’s two flagship London councils: Westminster, a Conservative stronghold since 1964, and Wandsworth, beloved of former prime minister Margaret Thatcher and run by the Tories since 1978.

While Starmer’s party also won the borough of Barnet, it made less progress in traditional “red wall” areas in the north of England, offering Johnson some respite.

Elections expert Sir John Curtice told the BBC the results were not good enough for Labour to suggest Starmer was heading for a majority at the next general election and that outside London Labour’s vote was “actually down slightly” on its performance in the same council elections in 2018.

Elsewhere, the Conservatives lost ground to the Liberal Democrats, who have opened up a second front for Johnson in some of the more affluent “blue wall” seats across southern England, while the Tories were braced for heavy losses in Scotland.

Local Tory leaders turned on Johnson as the results came in. John Mallinson, Tory leader of Carlisle council, said after Labour won the new Cumberland authority: “I just don’t feel people any longer have the confidence that the prime minister can be relied upon to tell the truth.”

After weeks of campaigning, many Conservatives were frustrated that national events — including the “partygate” scandal and reports of sexual misconduct by Tory MPs — had cost them votes.

Almost 150 councils held votes across England on Thursday, including all 32 boroughs in London. Council seats were also contested in Scotland and Wales, while there were crucial elections to the Northern Ireland assembly, with the first results expected later on Friday.

Tory MPs will pore over the results for any signs that Johnson, who has been sharply criticised over partygate and his handling of the cost of living crisis, has been permanently damaged as party leader. Several MPs urged the prime minister to raise his game.

On Friday, Johnson said it had been a “mixed set of results” but stressed he wanted to focus on issues such as building new infrastructure, increasing renewable energy and hiring more nurses.

“It’s midterm and it’s certainly a mixed set of results and I think the lesson that I take . . . we’ve got to get on with the stuff that matters and keep delivering on our agenda.”

Johnson was among dozens of government figures fined by police for gatherings held during Covid-19 lockdowns, prompting calls by Starmer to resign.

Yet on Friday Starmer found himself in the spotlight after Durham Constabulary issued a press statement saying it had received “significant new information” about a Labour gathering in Durham on April 30, 2021.

Campaigners including Starmer ordered beer and curry to their offices at 10pm that evening, although the leader has insisted that it was just a short work break.

“At the time it was concluded that no offence had been established,” the force said on Friday afternoon. “Now, following the conclusion of the pre-election period, we can confirm that an investigation into potential breaches of Covid-19 regulations relating to this gathering is now being conducted.”

Although Tory peer Lord Gavin Barwell called the results in London “a catastrophe”, Labour’s relatively poor performance outside the capital will give Johnson some political breathing space.

The elections were a big test for Starmer, who needs to show that Labour is regaining ground from the Tories in the north, and wants to overtake the Conservatives as the main opposition to the SNP in Scotland. 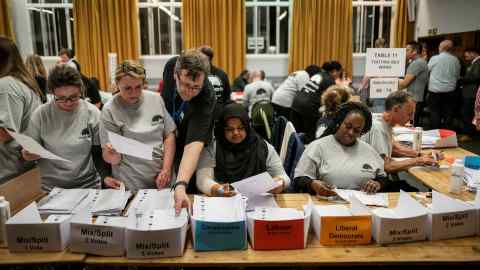 While Labour did well in London and took Southampton and Worthing from the Tories, the party was faring less well elsewhere and it was clear Starmer has much ground left to recover if he hopes to win the next general election.

Labour claimed the results showed it was on course to win 16 parliamentary seats from the Tories at the next election in areas where voters backed Brexit, arguing the party had progressed since the 2019 general election drubbing.

Shabana Mahmood, Labour’s campaign chief, said: “This is a turning point. After the disastrous results of 2019, these early results are showing the progress we have made thanks to Keir’s leadership.”

With about half of all results in, the Lib Dems were on course for sizeable gains. Sir Ed Davey’s party seized the northern city of Hull from Labour and took control of the new unitary Somerset council. The Greens were also making gains across the country.

Here’s how much cash you need for a recession, according to advisors

News - July 6, 2022 0
designer491 | iStock | Getty ImagesWith the threat of a recession looming, more financial experts are sharing how to prepare — including how much...

Factbox: Reaction to the death of South Africa’s Desmond Tutu

News - May 19, 2022 0
UK consumer confidence has dropped to its lowest level for nearly 50 years amid the cost of living crisis, according to a survey, fuelling...
© 2021 Flag Media Group. All Rights Reserved. ** TELL YOUR STORY **
We do not generate news. This digital publication and all Flag Media publications curate Google news using Google RSS Feeds.
Please advise if any posts need to be removed for licensing/copyright issues.