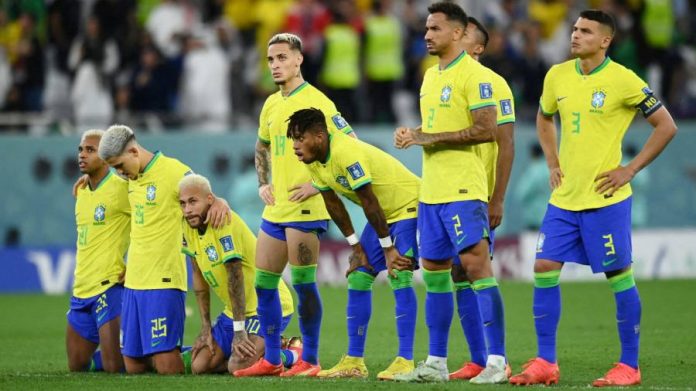 For most of his extraordinary time as a footballer, the late Pelé played in Brazil for the club Santos. But so many compatriots of the legendary player have had to venture abroad in search of financial rewards and stronger competition.

This is something a pair of opposing consortiums vying to create a new domestic competition in the football-mad country are hoping to change.

The model — inspired by the English Premier League — will be controlled by clubs, rather than the national federation. The idea is to unlock the game’s commercial potential in Brazil and improve its quality, with the backing of big money.

In theory, a club-led structure should enable collective negotiation of transmission rights, leading to more lucrative deals than those obtained on the current individualised basis. Higher wages could in turn convince young talent to stay at home for longer.

“Our vision is that in 10 years we can reach the French league in terms of overall revenues,” says Lawrence Magrath, co-founder of Codajas Sports Kapital. Its Liga do Futebol Brasileiro project, or Libra, has the support of 16 clubs from the existing top two nationwide divisions.

With bankers at BTG Pactual advising, the group is in exclusive talks with Mubadala, the Abu Dhabi sovereign fund, over a potential injection of R$4.75bn ($890mn) for a 20 per cent interest in the venture.

Together with an expansion of sponsorship and marketing, boosters of a new league believe it could help Brazilian club football reach the kind of international projection enjoyed by top European sides.

Manchester United, Real Madrid, Paris Saint-Germain and Juventus have become household names around the globe in the past few decades on the back of overseas promotion. Yet despite Brazil’s strong claim to be the spiritual home of the “beautiful game”, the same cannot be said for the likes of Flamengo, Corinthians or Palmeiras.

“We firmly believe that in 20 years we can be the second-biggest league in the world, only after the [English] Premier League. We have the raw materials and a timezone that’s consumer-friendly globally for transmissions,” adds Magrath.

However, disagreements over how to divvy up broadcast receipts between clubs in a fair and competitive manner have caused a split. A breakaway initiative, Liga Forte Futebol, has 26 clubs on board and is being advised by investment firm XP and professional services group Alvarez & Marsal. It is in discussions with an unnamed group of US investors.

If selling a slice of the league to private shareholders other than clubs might prove controversial in other countries, there has been little if any resistance among the faithful in Brazil. This could be down to negative perceptions of the federation because of past corruption scandals, the prospect of greater resources for teams, or simply a lack of awareness.

Both plans are part of a wider push to professionalise the business of football in Brazil. Bad financial management has left many clubs drowning in debt. The situation is often blamed on the traditional way they are run: as not-for-profit associations controlled by fans with elected presidents.

But following new legislation to encourage private capital into teams, a handful of takeovers have drawn funding commitments worth tens of millions of dollars. Amir Somoggi, managing director at consultancy Sports Value, estimates that the combined turnover of Brazil’s top 20 clubs could roughly double to around $2.6bn within five years of a new league. “But the clubs will need to stop these arguments over money and think big,” he says.

The consensus is that only one unified proposition will prevail. “The objective is to have all 40 clubs from Serie A and B within a single proposal,” says one person involved behind the scenes. “The tendency now is to negotiate a merger.”

A year-and-a-half since discussions around a new league first emerged, there is now pressure to pick up the tempo. The clock is ticking on the respective 90-day periods both outfits have to reach agreements with their prospective backers. Meanwhile, talks with Brazil’s main broadcaster Globo over new contracts beginning in 2025 are expected to start this year.

With most of the national squad plying their trade at European clubs, the team’s flashes of brilliance in the Gulf gave a flavour of what a revitalised domestic league might have to offer. The question is whether those behind the proposals can discover a binding team spirit.

News - October 2, 2022 0
Why is the blockchain transaction framework becoming the future of cybersecurity? Because Blockchain is the most secure framework in the world! Being secure is everything! Once...

iPhone 14 rumors: Will Apple’s next iPhone finally ditch the notch?

News - October 24, 2021 0
© 2022 Venture Current is a Flag Media LLC Publication. All Rights Reserved.
VC is part of the FLAG Token rewards network. Clients and partners can use FLAG Tokens for VC products and services.
VC runs 'Automatic' software. Stories posted here come from generic-topic Google news RSS feeds as well as client and partner-approved content.
If a story appears on this page that needs to be deleted due to licensing issues, please message us immediately so we can help you.