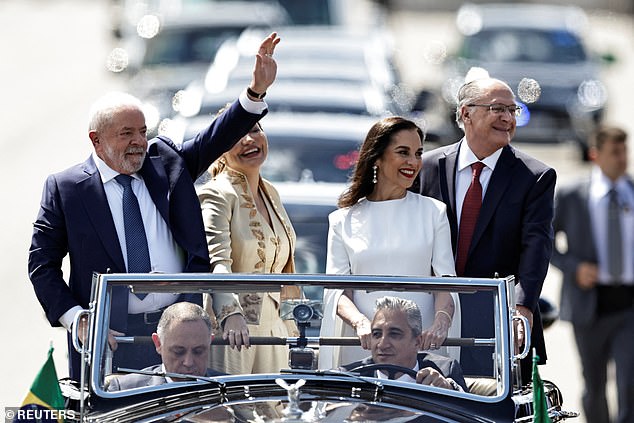 Brazilian police stopped a man with an explosive device and a knife who was trying to enter President Lula’s inauguration.

Officials detained the man on Sunday as he tried to make his way into where the inauguration was being held at the esplanade, an avenue that is surrounded by government buildings in Brazil‘s capital, Brasilia.

Security has been tight in the capital before the inauguration that saw transition of power from Jair Bolsonaro to President-elect Luiz Inacio Lula da Silva on New Year’s Day.

There had been threats of violence from far-right supporters of Bolsonaro prior to Lula’s official swearing in.

The motorcade of Brazil’s President elect Luiz Inacio Lula da Silva is seen near the Planalto Palace in Brasilia, Brazil, on January 1 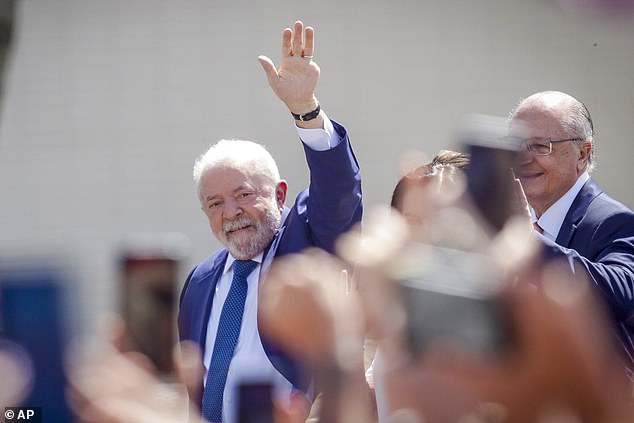 President-elect Luiz Inacio Lula da Silva waves from an open car after departing from the Metropolitan Cathedral to Congress for his swearing-in ceremony, in Brasilia, Brazil on Sunday 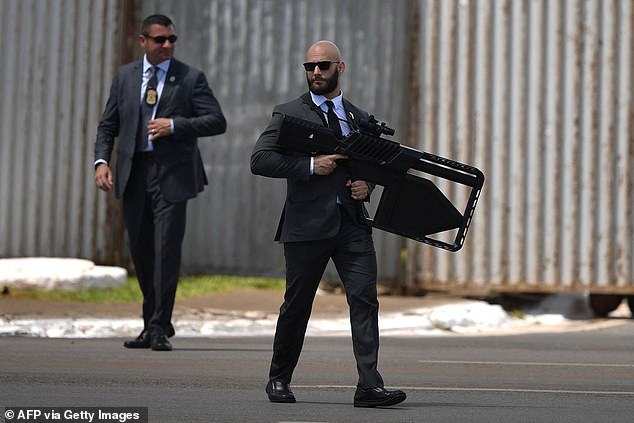 A security agent walks with an anti-drone gun before the inauguration ceremony of President-elect Luiz Inacio Lula da Silva in Brasilia, on January 1

Elsewhere, supporters of the new president paraded in a carnival-style as they waved giant red and rainbow flags as thousands of people flooded into Brasilia.

The presidential inauguration with a rock-festival vibe has been dubbed ‘Lulapalooza’.

Near the seat of power in the capital city Brasilia, a group of Indigenous dancers covered in body paint played traditional percussion instruments and sang.

‘Shake your maracas, life will get better with Lula as president,’ went their song – echoing the charismatic but controversial ex-president’s promise to ‘make Brazil happy again,’ like during the boom years of his first presidency (2003-2010).

Indigenous groups have been among the biggest critics of Bolsonaro, who pushed to open their protected reservations to mining and presided over a surge in destruction of the Amazon rainforest. 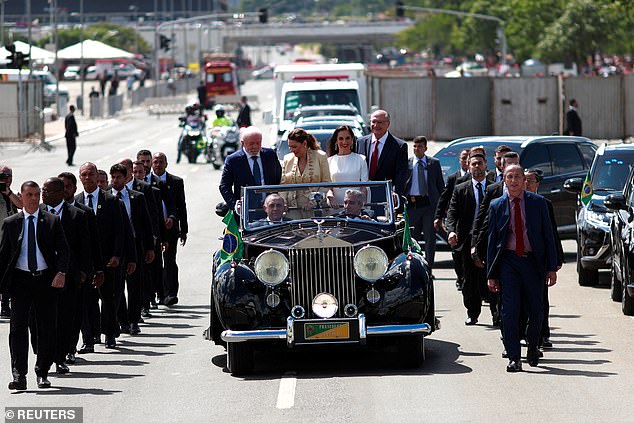 Brazil’s President elect Lula arrives as the Planalto Palace in his motorcade in Brasilia, Brazil, on New Year’s Day 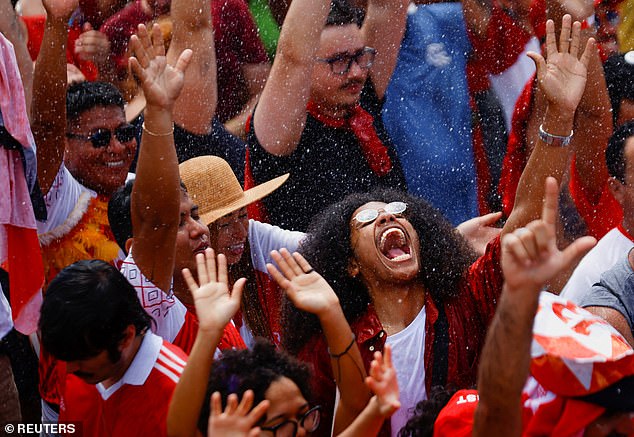 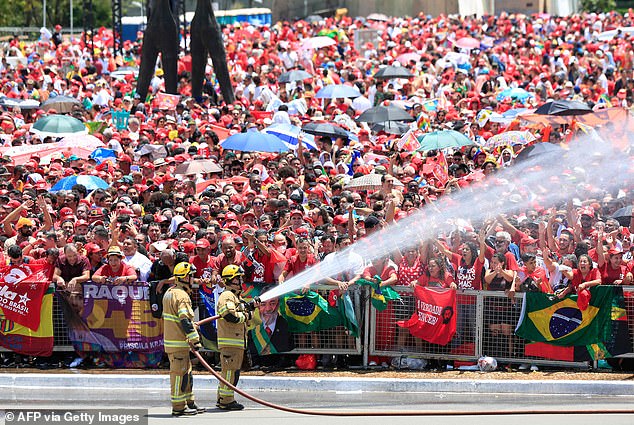 Firefighters spray water to relieve supporters of President-elect Luiz Inacio Lula da Silva from the heat as they gather to wait for his inauguration ceremony at “Tres Poderes” square in front of the Planalto Palace in Brasilia, on January 1 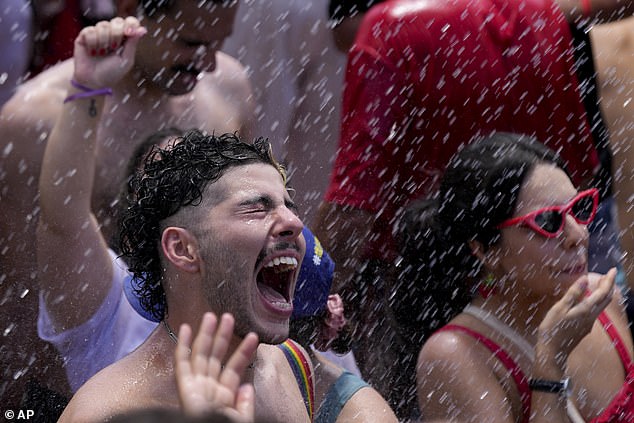 A supporter of Lula cheers as he is sprayed with water for relief from the heat at inauguration day, Brasilia, Brazil, January 1 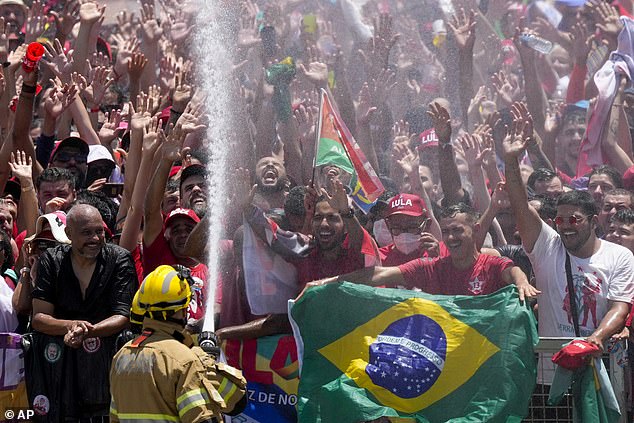 ‘I came to see Lula’s inauguration because I don’t like Bolsonaro. Unlike him, Lula respects Indigenous peoples,’ said Indigenous chief Bepkriti Teseia, 42, sporting a giant feather headdress and speaking through an interpreter.

Fans from across the country stood in huge lines to filter through the tight security cordon around the presidential palace and Congress, belting out chants as they waited, such as ‘Lula, guerreiro do povo brasileiro!’ (Lula, warrior of the Brazilian people).

Most were decked out in the red of Lula’s Workers’ Party (PT). But 15-year-old Sofia de Souza Martins came in Brazilian yellow and green, which Bolsonaro supporters had claimed as their symbol.

‘These colors belong to everyone,’ said the Sao Paulo high school student, who traveled some 1,000 kilometers (more than 600 miles) by bus for the event, which the outgoing president snubbed by flying off to the US state of Florida Friday. 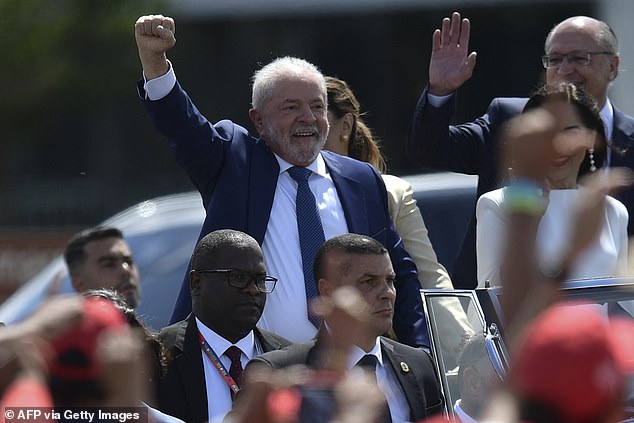 Brazil’s President-elect Luiz Inacio Lula da Silva gestures at supporters on his way to the National Congress for his inauguration ceremony, Brasilia, January 1 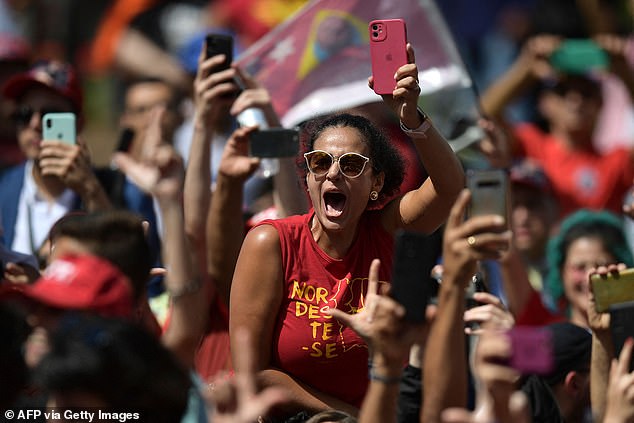 A supporter of Brazil’s President-elect Luiz Inacio Lula da Silva, dressed in his party’s red colours, cheers as he arrives at the National Congress for his inauguration ceremony, in Brasilia, on January 1 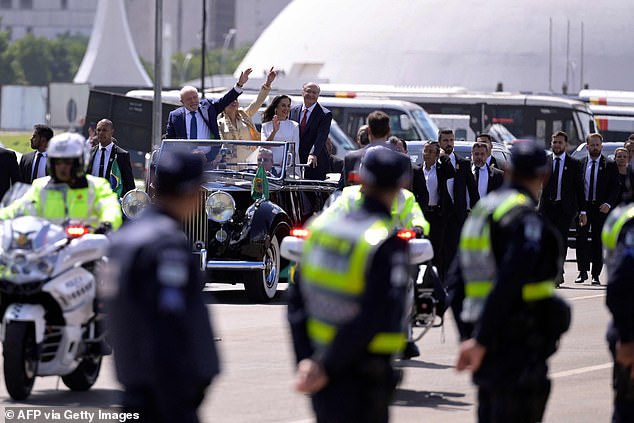 Brazil’s inauguration day is set to be a mix of pomp and party, combining traditional ceremonies like the oath of office and bestowing of the presidential sash with parades and concerts by acts like samba legend Martinho da Vila and drag queen Pabllo Vittar.

Billed as ‘Lulapalooza’ – a play on the famed Lollapalooza music festival – it was organized chiefly by Lula’s wife, Rosangela ‘Janja’ da Silva, 56, whom the twice-widowed 77-year-old married in May.

There was a colorful carnival atmosphere in the massive security line, where fans brandished a three-meter (nearly 10-foot) tall Lula effigy – a ‘boneco,’ or traditional carnival figure from the northeastern city of Olinda.

‘We’re emerging from four horrible years, but we get back the best president Brazil ever had. Under Lula, I saw lots of young blacks like me go to university, and poor people’s purchasing power expanded. My father was able to buy his first car.’

To the Brazilian left, it is a bright new day, after the dark years that saw Lula’s hand-picked successor, Dilma Rousseff, impeached in 2016, and Lula himself imprisoned for 18 months from 2018 to 2019 on controversial, since-quashed corruption charges.

Loide Farias, 49, emotionally recalled protesting outside the federal police building in her southern hometown, Curitiba, where Lula was jailed.

‘Seeing Lula return to power is priceless,’ she said.

‘We cried so many tears seeing him in prison, fearing he would never get out. But we always kept up hope.’

Wall Street is pumped about the metaverse. But critics say it’s massively overhyped and...

News - December 25, 2021 0
Wall Street is hugely excited about the metaverse, calling it the next big theme in investing that could change the world. But critics say the...

Xbox owns Call of Duty — the war of exclusivity begins

News - August 13, 2021 0
The Carnival Cruise Ship 'Carnival Vista' heads out to sea in the Miami harbor entrance known as Government Cut in Miami, Florida June 2,...
© 2022 Venture Current is a Flag Media LLC Publication. All Rights Reserved.
VC is part of the FLAG Token rewards network. Clients and partners can use FLAG Tokens for VC products and services.
VC runs 'Automatic' software. Stories posted here come from generic-topic Google news RSS feeds as well as client and partner-approved content.
If a story appears on this page that needs to be deleted due to licensing issues, please message us immediately so we can help you.