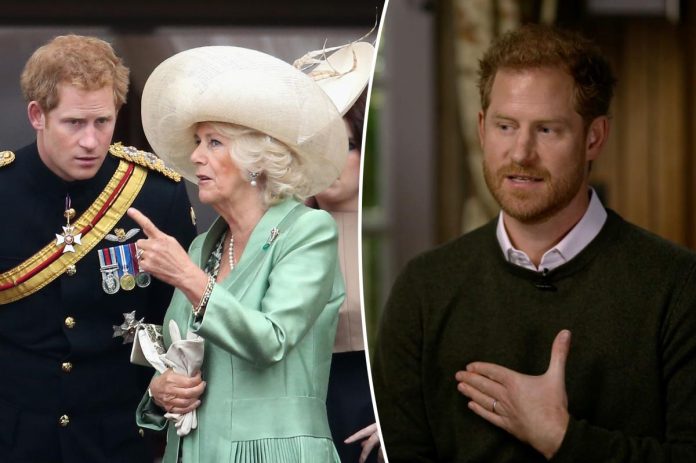 Prince Harry made his disdain for his stepmother known in his “60 Minutes” interview Sunday.

The Duke of Sussex described Queen Consort Camilla as the “villain” in his parents’ relationship, reiterating mom Princess Diana’s explanation that Camilla was “the third person in their marriage.”

“She needed to rehabilitate her image,” Harry, 38, said of Camilla, 75, who married his father, King Charles III, in 2005, nine years after the monarch and Diana divorced.

But while Camilla and Charles, 74, waited nearly a decade after his separation to tie the knot, the pair carried on a long-term affair while they were both married to other people.

Princess Diana famously described her marriage to Charles as a “bit crowded” because of the tryst.

Harry wrote in his memoir, “Spare,” that he wanted Camilla “to be happy,” because it might make her “less dangerous.”

The royal renegade explained to Anderson Cooper that Camilla’s desire to change people’s perception of her was threatening “because of the connections that she was forging within the British press.”

He continued, “And there was open willingness on both sides to trade of information. And with a family built on hierarchy, and with her, on the way to being Queen consort, there was gonna be people or bodies left in the street because of that.”

Camilla’s image was suspect by the British public for many years because of her affair with King Charles, which included the revelation of a highly embarrassing conversation involving tampons. She was labeled a home-wrecker and often compared unfavorably to Princess Diana, who died in August 1997.

The king even hired Marc Bolland, a palace aide, whose sole job was to shore up the public’s perception of Camilla.

Harry wrote in his book, which will hit shelves on Tuesday, Dec. 10, that both he and brother Prince William urged their father not to marry the now-queen consort.

“We didn’t think it was necessary,” Harry said of his father’s second marriage. “We thought that it was gonna cause more harm than good and that if he was now with his person, that — surely that’s enough. Why go that far when you don’t necessarily need to?

The royal siblings eventually conceded to the wedding, as they “wanted him to be happy and saw how happy he was with her.”

In February, Camilla said she was “honored’ that Queen Elizabeth II wanted her to have the queen consort title.

‘Our blood is boiling’: Victims angry as son of dictator closes in on Philippine...

News - May 5, 2022 0
MANILA, May 5 (Reuters) - Former political prisoner Cristina Bawagan still has the dress she wore the day she was arrested, tortured and sexually...

Internet Explorer officially dies tomorrow — what you need to know

News - June 14, 2022 0
Microsoft (opens in new tab) officially ends support for Internet Explorer tonight at midnight. This marks the end of an era for the Redmond-based...

News - November 8, 2021 0
Poland has increased security along its border with Belarus and accused Minsk of trying to engineer a major confrontation as hundreds of migrants and...

News - June 10, 2022 0
Noted economist Mohamed El-Erian said Friday that the Federal Reserve has to take bold actions immediately to restore confidence that this inflation surge can...
© 2022 Venture Current is a Flag Media LLC Publication. All Rights Reserved.
VC is part of the FLAG Token rewards network. Clients and partners can use FLAG Tokens for VC products and services.
VC runs 'Automatic' software. Stories posted here come from generic-topic Google news RSS feeds as well as client and partner-approved content.
If a story appears on this page that needs to be deleted due to licensing issues, please message us immediately so we can help you.