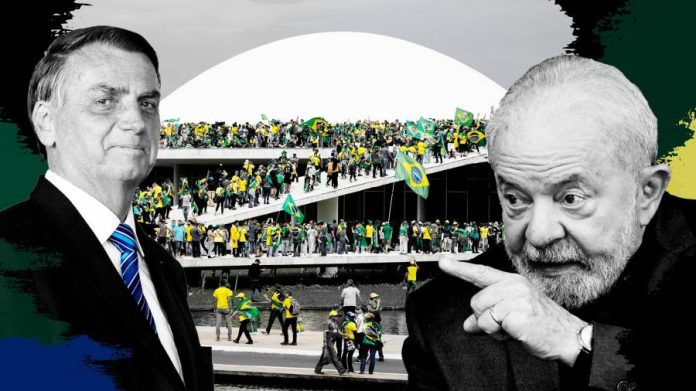 On January 2, the day after veteran leftist Luiz Inácio Lula da Silva was inaugurated as Brazil’s president, Anderson Torres started a new job in charge of security in the nation’s capital.

A former federal police agent who had been justice minister under the previous president Jair Bolsonaro, Torres removed several of the police commanders in Brasília and then promptly went on holiday to Florida.

His vacation has been cut short. After the storming of key government buildings in Brasília on Sunday, which represented the biggest attack on Brazilian democracy since the military rule of the 1980s, the Supreme Court ordered the arrest of Torres, accusing him of dereliction of duty.

Federal police also found what appeared to be a draft presidential decree in Torres’s house ordering an intervention to overturn the result of the October election, which the far-right Bolsonaro narrowly lost to Lula.

Torres has denied any involvement in the riot, which had many echoes of the January 6 assault on the US Capitol in 2021. In a tweet, he insisted the draft decree had been “leaked out of context” by the police. “There was a pile of documents in my home for throwing away, where very probably the document described in the report was found,” he said. Bolsonaro has also denied any connection to the riot.

But government officials believe the three-hour-long rampage, during which Bolsonaro supporters ransacked the Supreme Court, the presidential palace and Congress, smashing windows, destroying furniture and slashing paintings, amounted to an attempted coup. They also believe it was assisted by parts of the security forces looking the other way because of their loyalty to Bolsonaro.

“Anderson Torres took over as secretary of security, dismissed the entire command and travelled,” says Ricardo Cappelli, the federal government official who is temporarily in charge of security in Brasília. “If this isn’t sabotage, I don’t know what is.”

The investigation into figures on the right such as Torres is part of the delicate minefield that the 77-year-old Lula now finds himself in as he starts a third term in office, one he had hoped would focus on poverty and the environment. Instead, Lula’s time will be consumed, at least to begin with, by trying to protect and bolster Brazil’s democratic institutions without provoking a powerful rightwing backlash.

Many of his supporters want a no-holds barred investigation of the riot and lengthy prison sentences for those found guilty of crimes. They argue this is the only way to defend democracy.

But Brazil is a sharply polarised country — Lula only won the second round run-off by less than two percentage points, a result that is still vigorously disputed by many of Bolsonaro’s supporters. Lula knows that many of the country’s institutions, from the military to the Supreme Court, are creaking under political pressure and accusations of divided loyalties.

On Thursday, Lula suggested that even officials within the presidential palace might be working against him. “How can I have someone at the door of my office who might shoot me?” Lula asked reporters.

The depth of Brazil’s divisions were exposed by an opinion poll published by Atlas Intelligence this week. Some 38 per cent of Brazilians said the storming of the government buildings was partly or wholly justified, almost 40 per cent said they did not believe Lula had really won the presidential election and 36.8 per cent favoured military intervention to invalidate the result.

Filipe Campante, an associate professor at Johns Hopkins University, says Lula does have a window of opportunity to try to cordon off the far right, given that some Bolsonaro voters disapprove of the riot, but also points to potential dangers.

“There’s a lot of political energy in the far right, and the temptation for politicians on the right to try and harness that to their ends will be huge,” he says. “This is not to mention the big challenge of the deep enmeshment of the far right with the military and security forces.”

‘Cut and paste’ of the Trump playbook

While responsibility for the Brasília riot is still being investigated, there is little doubting the similarities between Brazil’s insurrection and the one at the US Capitol almost exactly two years earlier. This is no coincidence: Donald Trump and Bolsonaro were strong allies and there is a long history of contact between far-right activists in the two most populous nations in the Americas.

“The Bolsonaro family and their supporters are keen readers of the Trump playbook,” says Robert Muggah, co-founder of the social policy institute Igarapé. “Many of their tactics are ‘cut and paste’. Bolsonaro’s allegations of mass election fraud in Brazil are the most obvious indicator that he’s read the Trump memo.”

Bolsonaro’s third son Eduardo, a Brazilian congressman, was in Washington during the US Capitol riot. Along with his wife Heloisa, Eduardo visited the White House on January 4, 2021 two days before the insurrection, according to official visitor logs.

Eduardo Bolsonaro “had a good opportunity to talk to people who were involved”, says Tom Shannon, a former top US state department official. “The Bolsonaros came away from January 6 convinced that Trump had failed because he relied on the mob and didn’t have institutional support even from his own vice-president. Bolsonaro’s team then attempted to build that institutional support in the Brazilian military and the police.”

In another echo of Trumpian tactics, a questioning of the reliability of electronic voting machines, the rioters unfurled a banner on the roof of Congress during the brief occupation reading “We want the source code” in English and in Portuguese.

“I don’t accept an electoral system that I don’t understand and I have no way of knowing if it recorded my votes correctly,” says Ana Maria Sousa, 40, a Bolsonaro supporter who was among those taking part on Sunday, having travelled more than 1,300km from the southern state of Rio Grande do Sul.

Bolsonaro, like Torres, has also been spending time in Florida in a house owned by Brazilian former mixed martial arts fighter José Aldo. The former president has said he plans to return to Brazil soon, where he faces multiple investigations into his presidency, including for mismanagement of the Covid pandemic in which nearly 700,000 people died, an alleged conspiracy to spread fake news and accusations of corruption.

Other conservatives, who share Bolsonaro’s nationalism and social values but have distanced themselves from his attacks on democratic institutions, may jostle for leadership of Brazil’s powerful political right, which made big gains in last year’s congressional and gubernatorial elections.

But Bolsonaro still has a passionate personal support base. There have been crowds of supporters mingling all week outside his vacation home on the outskirts of Orlando, five minutes from Disney World, many of them wearing Brazil football strips.

“In my life, he is the first president from Brazil where I know he is honest,” says Wanderlucio da Silva, 39, who now lives in Connecticut. “It’s almost 16 years of corruption, corruption, corruption. He is military. And 90 per cent of the military is honest people. We love him. We honour him.”

While Lula has spent the week trying to project a business-as-usual image, he is also grappling with disturbing questions about the actions — or lack of actions — of important officials.

The investigation into Torres is part of a broader question about why key government buildings were lightly guarded on a day when extremist Bolsonaro supporters had announced an “occupation” of Brasília.

Critics have asked why some of the police accompanying the protesters were filmed snapping selfies and buying coconut water instead of stopping them storming the buildings.

At the centre of these questions lies the military. Despite heavy criticism of the newly appointed defence minister José Múcio for not doing more to prevent the riot, Lula has stood by him, a decision which analysts say reflects his unease about an institution deeply penetrated by Bolsonarista ideology.

Bolsonaro is a former army captain and filled the ranks of government with several thousand serving and retired military officers and showered the armed forces with praise and generous budgets.

In one indication of the mood among the military, Hamilton Mourão, a former army general who served as Bolsonaro’s vice-president, initially condemned the “vandalism” of the protesters. But two days later, he attacked the arrest of hundreds of protesters by what he called a government with “Marxist-Leninist roots” which was “acting in an amateur, inhuman and illegal way”.

Lula has rebuked the armed forces in the wake of the riot, saying they are not the moderating force they think they are. “The armed forces have a defined role under the constitution, which is the defence of the Brazilian people and the defence of our sovereignty against external conflicts. That’s what I want them to do,” he said.

Rafael Alcadipani, an expert on the armed forces at the Brazilian Forum on Public Security, believes Lula needs a stronger defence minister. “There is still a lot of Bolsonaro ideology within headquarters and within the armed forces,” he says. “This needs to change.”

The other institution in the limelight is Brazil’s Supreme Sourt, which enjoys far wider powers than equivalents in other countries and which has taken the lead in the official response to the riot.

It was one of it its most controversial justices, Alexandre de Moraes, who gave the order to arrest Torres and to suspend the governor of Brasília, Ibaneis Rocha — part of an 18-page judgment issued within hours of the riot.

During the election, Moraes spearheaded a fight against disinformation, sometimes leading to claims that he was overstepping the mark. Luis Felipe D’Avila, a political scientist and former rightwing presidential candidate, is one of those who has voiced concern. “There’s a degree of impulsiveness in the positions which Moraes has been adopting which doesn’t sit well with the role of the Supreme Court,” he says.

Moraes’ swift interventions this week have made him a hero for many Brazilians, especially on the left, but have further inflamed Bolsonaro’s supporters, who dislike him as much as Lula.

“The dictatorship we are fighting against has become even more open now. Alexandre de Moraes thinks that he is the emperor of the country and that he can violate our rights and freedoms,” says Sousa, the pro-Bolsonaro protester. “But we are not going to accept that without a fight.”

News - September 6, 2021 0
US immigration updatesSign up to myFT Daily Digest to be the first to know about US immigration news. The writer is an FT contributing columnistNearly...

News - January 1, 2022 0
The world is ringing in 2022 with muted celebrations for another year, as the coronavirus pandemic — now fueled by the fast-spreading Omicron variant...

News - January 7, 2023 0
In this article, we discuss Jim Cramer's recession-proof stock picks. To skip to the top four stocks in this list, go to Jim Cramer's...

Another Part of the Yield Curve Just Inverted. It’s the First Time Since 2006.

News - March 28, 2022 0
Text size ...
© 2022 Venture Current is a Flag Media LLC Publication. All Rights Reserved.
VC is part of the FLAG Token rewards network. Clients and partners can use FLAG Tokens for VC products and services.
VC runs 'Automatic' software. Stories posted here come from generic-topic Google news RSS feeds as well as client and partner-approved content.
If a story appears on this page that needs to be deleted due to licensing issues, please message us immediately so we can help you.