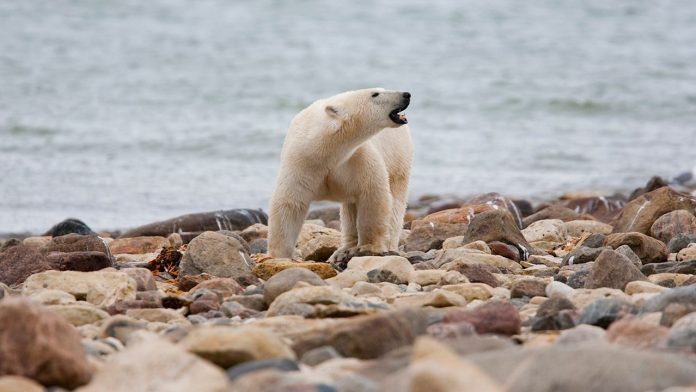 Researchers have found an alarming death rate among polar bears in Canada’s Western Hudson Bay, an area that includes a town called “the Polar Bear Capital of the World.”

According to a new government survey, the once populous predators are dying off in the southern edge of the Arctic — and are doing so in high numbers.

Females and bear cubs are especially having a hard time surviving, the study found.

“The actual decline is a lot larger than I would have expected,” said Andrew Derocher, a biology professor at the University of Alberta.

While Derocher has studied the Hudson Bay polar bears for nearly 40 years, he was not involved in the study.

The decline has persisted for decades, showing since the 1980s that the number of bears in the region has fallen by nearly 50%, the researchers found.

A polar bear swims to catch a beluga whale along the coast of Hudson Bay near Churchill on August 9, 2022.
(OLIVIER MORIN/AFP via Getty Images)

The decline shares a correlation with the disappearing of ice essential to their survival, they said.

Polar bears survive on arctic sea ice — frozen ocean water — which they use to swim and hunt their food. The ice seasonally shrinks in the summer as warmer temperatures are more common and re-forms during colder winter months.

Stephen Atkinson, the lead author of the study who has studied polar bears for more than 30 years, said this sea ice is melting earlier in the year and is taking longer to freeze over, due to generally warmer temperatures brought about by climate change.

“Those are the types of bears we’ve always predicted would be affected by changes in the environment,” Atkinson said.

A male polar bear walks along the shore of Hudson Bay near Churchill, Manitoba, Aug. 23, 2010. Polar bears in Canada’s Western Hudson Bay — on the southern edge of the Arctic — are continuing to die in high numbers, a new government survey released Thursday, Dec. 22, 2022, found.
(Sean Kilpatrick/The Canadian Press via AP)

“It certainly raises issues about the ongoing viability,” Derocher said. “That is the reproductive engine of the population.”

Less ice and fewer polar bears result in fewer opportunities for the bears to mate, further impacting their decline, Atkinson said, “because you simply have fewer young bears that survive and become adults.”

News - August 23, 2022 0
Riot Games has given Legends of Runeterra its first exclusive champion, Norra, a Bandle City Yordle who summons random followers.  Norra will join the...

News - May 13, 2022 0
Earlier this week during its I/O developer conference, Google released the second beta of Android 13 to its Pixels. At the same time, a...

News - January 7, 2022 0
The group of over 100 travellers have been branded "barbarians" by Prime Minister Justine Trudeau. Source

News - August 18, 2022 0
Earnings at Chinese property developer Country Garden fell as much as 70 per cent in the first half of the year, as the country’s...

Hong Kong’s financial hub is at a crossroads

News - January 16, 2023 0
Look for a senior job in Hong Kong these days on LinkedIn and you’re unlikely to find any openings unless you’re a speaker of...
© 2022 Venture Current is a Flag Media LLC Publication. All Rights Reserved.
VC is part of the FLAG Token rewards network. Clients and partners can use FLAG Tokens for VC products and services.
VC runs 'Automatic' software. Stories posted here come from generic-topic Google news RSS feeds as well as client and partner-approved content.
If a story appears on this page that needs to be deleted due to licensing issues, please message us immediately so we can help you.