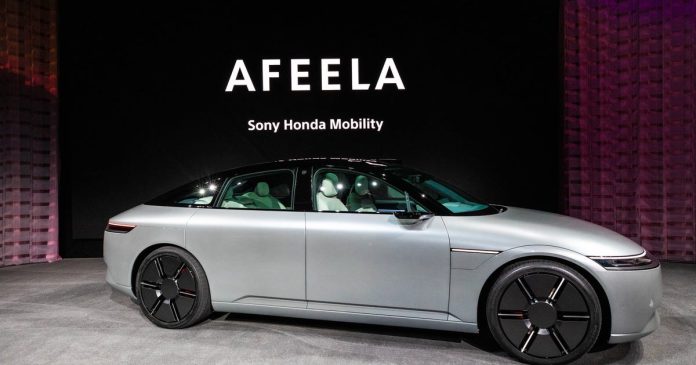 CES means three things: A lot of hype, a lot of noise and a lot of dazzling new tech. The world’s biggest consumer electronics show is officially on, with media day kicking off in Las Vegas on Wednesday. We’re live on the CES show floor trying it all, sifting through it all to bring you the coolest, wackiest, most innovative new tech we spot.

So far, we’ve gotten a glimpse into what companies like Samsung, LG, Intel, Nvidia and Dell have in store for 2023: beautiful TVs, beastly gaming rigs, an 8K projector and even a futuristic concept device or two. Beyond this year, we’ve gotten the big news that Sony is making its own car, scheduled to hit the roads in 2026.

We’re just getting started. CES rolls on until Sunday, so there’s plenty of weird and wonderful tech to be discovered. Consider this your TL;DR — if you read only one CES recap, make it this one.

EVs are big business, and Sony wants in. The electronics giant is teaming up with Honda on a new brand of electric vehicle called Afeela. The Afeela logo appeared on a narrow screen or “media bar” on the vehicle’s front bumper that can also interact and share information with people outside the vehice or passersby such as the weather or the car’s state of charge.

Unlike the car Sony showed off at CES 2020, all those years ago, this one is actually hitting the market. No word yet on pricing, but Sony said its Afeela car will hit North American roads in 2026. Japan and Europe will follow.

Technology can be so impersonal. BMW’s i Vision Dee hopes to fix that. Using sophisticated AI, this concept car ditches the servant schtick of Siri and Alexa. Instead, it hopes to double as both your car and your friend. The i Vision Dee is an EV sports car with an exterior of 240 e-ink panels. You can use those panels to program a digital face into the car’s grille — because it’s an EV, the ventillation grille’s typically provide isn’t actually needed — or change the car’s colors at the click of a button.

The BMW i Vision Dee is for now just a concept, but some of its features will trickle out to BMW’s actual cars. BMW CEO Oliver Zipse said, for instance, that the AI-powered HUB technology the company put into i Vision Dee will come to real cars in 2025.

Samsung gave us a look at a tantalizing mobile device concept, the Flex Hybrid. As the model above shows, the left side of the Flex Hybrid can fold, like the Galaxy Fold, while the right side can slide out to extend itself.

The concept comes courtesy of Samsung Display, not the Mobile arm of the South Korean megacorporation responsible for making and selling phones. But the press release showing off the concept promised it’ll bring to CES “innovative OLED products of all sizes, small, medium and large, to provide a glimpse into the future of displays.” Samsung isn’t the only company tinkering with the future of phones — see TCL’s 2020 scrolling display — so watch this space for more flipping, folding and scrolling devices.

A laptop in (glasses-free) 3D

Images leap off the screen of this ASUS laptop — not literally, but close. Its OLED screen produces a 3D experience sans glasses, much like competitor Acer’s similar IPS version. The OLED screen matters because the technology promises a visibly crisper 3D rendering. Asus’s 3D panel, aimed at creatives, uses eye-tracking to produce the 3D experience.

A TV with no wires… and no remote

CES has TVs — lots of ’em. But while the likes of Samsung, LG and TCL fight over getting the darkest blacks, the crispest image or the best-value TVs, a startup by the name of Displace TV is doing something different. It’s making TVs go wireless. No more finding creative ways to hide your TV chords, the company’s 55-inch OLED screen is designed to be stuck to walls or windows using suction cups.

Displace TV uses batteries rather than a wired connection for power, and you’ll use motion controls to change channels and adjust the volume rather than a remote. Read more about it here.

Smartwatches to track heart rate, sleep quality and blood-oxygen levels abound, but Citizen takes it a step further with its CZ Smart watch, which also measures fatigue and alertness levels. It’ll even tell you your chronotype — that is, whether you’re a night owl or an early bird. It’s another sign that smartwatch makers are focusing more and more on measuring the way sleep and stress impact overall wellbeing.

The thinnest gaming laptop in the world

Alienware surprised us with four new laptops ahead of CES, including the Alienware x14, which the company said is the thinnest 14-inch gaming laptop in the world. Featuring a 2,560×1,600-pixel display with a 165Hz refresh rate, it’ll sell from $1,799 when it ships this winter. A bigger version, the Alienware x16, starts at $3,099. These laptops are for people who are willing to sacrifice some power for slicker designs.

LG showed off its new Gram Style laptop, which features a hidden touchpad that presents itself only when you touch the palm rest. The stealthy haptic touchpad lights up under your fingers when touched, showing you where to tap and drag to navigate the screen. It’s a neat detail we didn’t know we wanted.

A giant leap for PC gamers who also use consoles

Dell’s Concept Nyx gaming controller looks at first glance like just another third-party Xbox controller, albeit with some fancy lights. Alas, it’s more than that. The Nyx controller is tricked out with a bunch of hidden inputs, which multiply the functionality of the controller.

The idea seems to be to bridge the gap between a gamepad and a keyboard. PC gamers are able to use hotkey setups to have dozens of inputs, far more than the typical gamepad, which is often limited to the options presented by a d-pad. That means they can use a wider range of attacks in an MMO, for instance, or cycle between six or seven guns in a first-person shooter rather than the two or three that console gamers are often limited to.

A fridge built to party

Keeping your food fresh is an important job; the humble fridge deserves a chance to let its hair down. LG’s MoodUp fridge has an exterior of LED panels, which allow for 190,000 different color combinations — and it has a Bluetooth speaker, making the panels pulsate when you play music. The MoodUp fridge is about more than refrigeration. It’s about the vibe.

Those LED panels can do practical things too, like flash when you’ve left a fridge door open for too long. The upper right panel becomes transparent with the nudge of a finger, allowing you to see what’s inside without letting any cold air out. But mostly, it does the vibe thing.

Roku has entered the chat

Roku announced it’s expanding into TVs, essentially competing with its own partnerships with more established TV makers such as TCL, Hisense and Sharp. The move has long been rumored and makes a lot of sense for the streaming device maker. Roku TVs will come with the brand’s Voice Remotes, which include the popular (and ever-useful) “find my remote” feature. Looks like LG and Samsung have some new competition.

The TV that puts all others to shame

It’s the world’s largest OLED TV: LG’s 97-inch model was actually unveiled last year, but in 2023 it’s gone wireless. That means the world’s largest screen with the best picture that technology allows is now free of that ugly jumble of cords. We’ve been covering TVs at CES for years, and even we were surprised — CNET TV guru David Katzmaier was so impressed, he says LG is putting all other TVs to shame with this one.

Upgrades coming to your laptop’s brains

Sleek displays and dazzling screens are nice, but often it’s the tech you don’t see that matters most. Intel unveiled a boatload of new 13th-generation processors, which will power a huge range of products and improve performance on a wide range of laptops.

Less abstract than chip performance are the upgrades they can yield. The new generation of Intel CPUs bring with them Unison, which lets iPhone and Android devices send and receive texts from your PC, as well as Thunderbolt 4, which among other improvements will set as a standard the ability to run two 4K external displays. Expect to see these features in product announcements over the next few days.

Then there was AMD’s press conference. Much of what the company touted was its pro-grade tech, like the AMD chips that were used to build Avatar 2’s visual effects. As far as products you can actually buy, AMD has partnered with HP for the Dragonfly Pro, a laptop designed for freelancers, and Lenovo for new Legion Pro gaming laptops. For PC gamers, AMD’s high-end Ryzen 7 7800X3D and 7950X3D processors are coming this year.

Cloud gaming, now in your car

Chief among Nvidia’s announcements are improvements to GeForce Now, its cloud gaming service, which allows you to stream games on laptops, phones and more. In short, the power of Nvidia’s GeForce 4080 GPU is coming to the cloud. If you subscribe to the premium tier of GeForce Now — henceforth known as GeForce Now Ultimate — you can now stream games at 240Hz, utilize ray tracing (which significantly improves how light is rendered in-game) and DLSS 3 (which uses an algorithm to boost frame rate while retaining image quality).

Plus, GeForce Now is coming to… cars. If your car has a screen on its dash, you can play while the car is in park. If there are screens behind the driver or passenger seats, those sitting in the back can game on the go. For starters, Nvidia is partnering with Hyundai, BYB and Polestar.

Elon Musk sells $3.58B worth of Tesla shares

Web 3.0 Adoption – the incentives are coming!

News - December 8, 2021 0
The radical world of play-to-earn. How can a game that doesn’t exist be worth $US10 billion?In recent months I have been down yet another...

News - November 26, 2022 0
Wearing a suit and tie, the 50-year-old landed at the airport in the economic hub of Abidjan ABIDJAN - Charles Ble Goude, a key figure...

Lightning Ukraine offensive pushes Russia back 70km in a week

News - September 10, 2022 0
Ukraine’s biggest offensive in the war to date has pushed back the front line 70km in a week, claiming the logistical hub of Kupyansk...

Why Selena Gomez Has Stayed Off Social Media For 4.5 Years

News - April 6, 2022 0
© 2022 Venture Current is a Flag Media LLC Publication. All Rights Reserved.
VC is part of the FLAG Token rewards network. Clients and partners can use FLAG Tokens for VC products and services.
VC runs 'Automatic' software. Stories posted here come from generic-topic Google news RSS feeds as well as client and partner-approved content.
If a story appears on this page that needs to be deleted due to licensing issues, please message us immediately so we can help you.