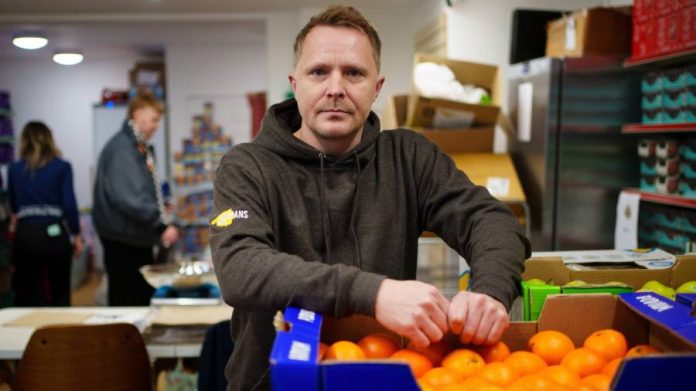 In a tiny, unassuming corner shop unit on a main road through north Manchester, three tonnes of donated fruit and vegetables had just been delivered in the December drizzle.

Within little over 24 hours, half a dozen bustling volunteers will have it parcelled up and ushered back out by the vanload to struggling households all over the city, accompanied by turkey, stuffing and chocolate yule logs.

Humans MCR is among an army of UK food charities supporting people over the Christmas period, as the cost of living crisis bites hard across the country. But there are no queues; co-founder Lewey Hellewell, who just five years ago was himself relying on food parcels, set out to “do it differently”.

“We deliver in unbranded vans with supermarket crates so, to your neighbours or your children, it’s just a regular supermarket delivery,” he said. “It speaks to the dignity we want to provide people.”

Dignity is Hellewell’s by-word. In 2017 he was made redundant from his job as a restaurant manager and within two months the money ran out.

“Suddenly everything started to get on top of me,” he said, recalling how, to begin with, he felt “shame” about asking for help.

“Eventually things got so bad I was left with no choice and used a couple of food banks,” he added.

“There was a lot of queueing outside in that horrible Mancunian weather, on really busy streets, so you felt like everybody driving by knew why you were there and if they wanted to, they were able to judge you.”

He also found people could only get three referrals a year for support, “which just blew my mind”. There was little choice in what he ate. “I just kept getting rice, so every night I’d go home and have badly cooked rice and then every mouthful was a reminder I was living in poverty.”

Two years later, after getting back on his feet, Hellewell set up Humans MCR with friend Rachel Parkinson.

People can be referred once a fortnight, the food is delivered to their door and labels on the fridges lining the charity’s walls indicate a wide range of options — halal and kosher meat, dairy substitutes.

“I think giving people that choice and agency makes them feel less like a number,” said new hub manager Sunita Parsons-Solomon, in between answering the phone. “I don’t think people realise the scale of the need that’s out there. Sitting here, getting calls from people, is really profound.”

The charity’s food bank arm is only the “crisis” stage of its support for struggling households, however. “Primarily what we are trying to do is lift people out of poverty,” said Hellewell, “and not put a sticking plaster on it.”

Humans MCR points people towards advice on all manner of financial struggles, from the expense of buying school uniforms to battling rental arrears. It has also set up an online grocery store, selling unsold supermarket groceries — often coming up to their best-before date, but still fresh — at a “massive reduction”.

A weekly shop for a family of four, including meat and other protein, costs £12.50, with free fruit and veg. There are currently 280 families on the waiting list.

In the new year, Hellewell is launching a family cookery course, using items available in the food parcels, teaching “people to use them in inventive ways without the need for a fully stocked larder full of herbs”.

Demand is eye-watering. Humans MCR set up just a few months before the pandemic hit and Covid “slapped us in the face”, said Hellewell. The charity delivered 150,000 food parcels during the first lockdown.

2022 has brought soaring inflation and a cost of living crisis. Inflation stood at 10.7 per cent in November, and the Office for Budget Responsibility, the fiscal watchdog, predicted that UK households will see a 7.1 per cent fall in living standards in the next two years.

“We’re currently looking at a demand shift that’s almost taken us back to Covid, where we were delivering to people working full-time, not used to using charitable services,” Hellewell said.

“About 20 per cent of people we see now are working full-time, some in multiple jobs and still struggling to be able to feed their families and put the heating on.”

That “gets my goat”, he added. “You can have two jobs and still there’s too much month left at the end of your money.”

Delivery drivers report “kids behind the parents all wrapped up in their winter coats — you can see their breath as they play in the kitchen”, as families struggle with heating bills.

“I wish I could give people some support to put their heating on, but my hope is the food support we can provide frees up some money for them to do that,” he said.

Other people are simply unable to work. In Stockport, just south of Manchester, the charity has been particularly worried about a couple in their 60s, one of whom has a long-term disability.

“You can feel the cold when the door opens,” said Hellewell. “They’ve both worked all their lives up to the point where they couldn’t any longer — and they just now feel the system is stacked against them.

“My heart broke for them.”

In the new year, Hellewell plans to sit down with the couple to help with their finances, in order to come up with a longer-term solution.

In the meantime, Humans MCR will have distributed festive parcels to more than 400 households by Christmas Eve. They include not only the elements of a Christmas dinner, but crackers, Terry’s Chocolate Oranges and gifts for the kids, with a blank gift tag for the parents to fill out “so it’s not come from charity”, said Hellewell.

For Parsons-Solomon, her first month as hub manager has highlighted not only the need in this deprived part of Manchester, but also the kindness.

“It takes one or two things to go wrong and suddenly you’re there,” she said of food poverty, adding that many of the charity’s most enthusiastic donors remember how that felt.

“They’ll say ‘I know exactly what it’s like — I used to get charity from a food bank’. And I find that really moving.”

News - May 21, 2022 0
The Association of Flight Attendants Union President Sara Nelson slammed Elon Musk on Friday over allegations that he sexually propositioned a SpaceX flight attendant....

LA Is The Third-Largest Startup Ecosystem in the U.S.

Bitcoin Surges Above This Major Level, Here Are Other Crypto Movers That Should Be...

News - August 25, 2021 0
Dick's Sporting Goods  (DKS) - Get Report shares jumped on Wednesday as the retailer’s fiscal-second-quarter earnings came in above expectations and it raised guidance.The Pittsburgh company is...
© 2022 Venture Current is a Flag Media LLC Publication. All Rights Reserved.
VC is part of the FLAG Token rewards network. Clients and partners can use FLAG Tokens for VC products and services.
VC runs 'Automatic' software. Stories posted here come from generic-topic Google news RSS feeds as well as client and partner-approved content.
If a story appears on this page that needs to be deleted due to licensing issues, please message us immediately so we can help you.