The Taliban’s takeover in Afghanistan redraws Asia’s geopolitical map and hands China and Russia — two of America’s staunchest strategic rivals — an opportunity to project their power in the wake of Washington’s chaotic withdrawal, analysts in several countries said.

“China has benefited from the irresponsible behaviour of [the US] which has deeply undermined the international image of the US and the relationship between Washington and its allies,” said Zhu Yongbiao, a Chinese government adviser on Central Asia and professor at Lanzhou University.

The Taliban declared victory on Sunday after Ashraf Ghani, Afghanistan’s president, fled the country, bringing to an end almost 20 years of a US-led coalition’s presence. The Afghan army, despite years of training and investment by Nato, barely put up any resistance as the insurgents rolled into Kabul.

But the cost of “America’s longest war” gives a sense of the task ahead. More than 3,000 American and other Nato lives were lost while 47,000 Afghan civilians and at least 66,000 Afghan military and police also died. Trillions of US dollars were added to the US national debt as Washington absorbed the brunt of bankrolling the war.

Early indications suggest that China — potentially supported by Russia, Pakistan and some other governments — will adopt a very different approach, according to diplomats and experts. Beijing is unlikely to deploy military force, seeking instead to use diplomatic and economic inducements to coax the Taliban on to a path of peaceful reconstruction.

“We hope that the Taliban of Afghanistan has united all parties and is establishing a political framework that meets the national conditions of Afghanistan and lays a foundation for long-lasting peace in Afghanistan,” said Geng Shuang, China’s deputy permanent representative to the UN.

Senior Asian diplomats, who declined to be identified, said Beijing was willing to stump up hundreds of millions of US dollars to finance the reconstruction of critical infrastructure in Afghanistan. Chinese investments in resource projects could potentially follow a restoration of order to Afghanistan’s economy, China experts said.

Beijing would be willing to extend formal recognition to the Taliban as Afghanistan’s legitimate government. In addition, it could work at the UN to seek an end to the designation of the Taliban as a “terrorist” organisation, though achieving this would require US co-operation and is therefore considered a longer-term goal, diplomats said.

But Beijing is crystal clear that the delivery of such inducements are dependent on the Taliban’s adherence to China’s main objectives.

Fan Hongda, a Middle East scholar at Shanghai International Studies University, said that following recent high-level meetings, the Taliban “should now fully understand China’s stance”. The most important priority is ensuring that Afghanistan does not become a “hotbed” for terrorist forces that threaten China.

Chief among such concerns are groups such as the East Turkestan Islamic Movement, which are composed of Uyghur fighters opposing Chinese repression in the north-western frontier region of Xinjiang, where China keeps an estimated 1m Uyghur and other minority peoples in internment camps.

The ETIM groups were estimated by the UN Security Council last year to number up to 3,500 fighters, some of whom were based in a part of Afghanistan that borders China. Both the UN and the US designated the ETIM as terrorists in 2002 but Washington dropped its classification last year.

At a meeting in China in July with Wang Yi, China’s foreign minister, the head of the Afghan Taliban Political Commission, Abdul Ghani Baradar, was quoted as falling into line with China’s demands.

“The Afghan Taliban has the utmost sincerity to work toward and realise peace,” a Chinese statement that followed the meeting said. “The Afghan Taliban will never allow any force to use the Afghan territory to engage in acts detrimental to China. The Afghan Taliban believes that Afghanistan should develop friendly relations with neighbouring countries and the international community.” 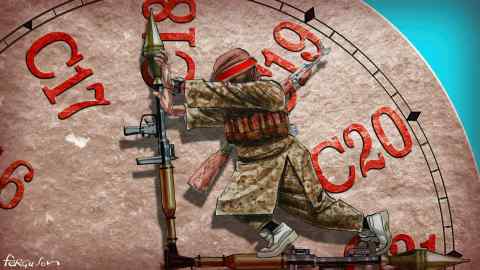 China is calling upon other regional actors such as Russia and Pakistan, with which Beijing maintains strong relations, to work with it. But the departure of the US changes the strategic calculus so drastically that uncomfortable new accommodations need to be made.

With the US troops in Afghanistan, Russia did not have to worry about securing the borders of its Central Asian allies. But now Moscow — which launched a doomed invasion of Afghanistan in 1979 — is preparing to move to a more activist stance. Diplomatically, it must also start to please the Taliban and the parties that have control over it, namely China and Pakistan, said Andrey Serenko, head of the Center of Contemporary Afghan Studies.

“It will most likely have to co-operate with China. China has all the trump cards now. China influences Pakistan, China retains its position inside Afghanistan, they hold the Taliban accountable,” he added.

“So the Russian strategy regarding Afghanistan is now going to depend on China, it will adjust to China more and more. The older brother, Beijing, will play the first violin here.”

‘Dude, you don’t matter much, so why is the BoE driving our market?’

News - November 9, 2021 0
When the Bank of England sprang a surprise last week by keeping interest rates on hold, the impact quickly spread beyond UK government bonds.The...

A big tech trade is losing its luster

News - August 6, 2021 0
Philip K. Dick would be rolling in his grave if he could see the state of some of the AI around today. The question...
© 2021 Flag Media Group. All Rights Reserved. ** TELL YOUR STORY **
We do not generate news. This digital publication and all Flag Media publications curate Google news using Google RSS Feeds.
Please advise if any posts need to be removed for licensing/copyright issues.