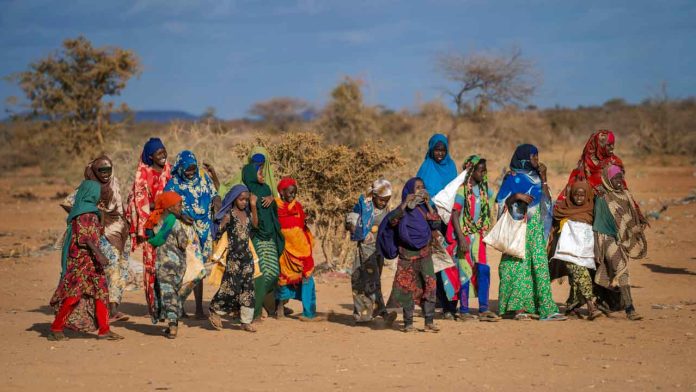 That’s the toxic cocktail that is Somalia today, stirred by a superpower struggle clothed in diplomatic niceties from Washington and Beijing. A country where real agendas are hidden, Somalia has been struggling to find peace for decades and is now staring a lethal famine in the face.

Not content with terrorizing the population, Islamist militant group al-Shabab, heavily linked to the al Qaeda terror movement, are now said to be actively and quickly bringing on famine in Somalia:

“With international support, al-Shabab is facing some pressure. What they are doing now is to weaponize the devastating situation that we are seeing, accelerating the (onset of) famine,” Jasmine Opperman, a former intelligence agent and now a leading security consultant specializing in extremism and political violence, told Fox News Digital. “They are intentionally displacing people who live under their rule.”

Simply put, in areas where al-Shabab is operating, its militants are pushing villagers, mostly farmers, and their livestock off their land and forcing them into situations where their animals die of starvation in what the U.N. High Commissioner for Refugees calls the worst drought the country has experienced in 40 years.

Observers point out this means the al-Shabab terrorists are, perhaps unwittingly, preventing agencies from establishing exactly how many are already dying of starvation. Some even say famine may already exist in Somalia. Even so, the official line, drawn up with apparently incomplete data, is that death tolls should reach famine levels within the next six months.

The UNHCR’s Guisse told Fox News Digital Somalia is “on the brink of famine.” Dire food and water shortages have left 7.1 million people in the country acutely food insecure. Millions have fled their homes in search of life-saving humanitarian assistance. This year alone, more than 1.1 million people have been displaced inside Somalia because of drought. In a massive operation, the UNHCR has helped nearly half a million people in Somalia this year.

Ummy Dubow, deputy country director in Somalia for programs for the aid agency CARE, which has supported more than 700,000 Somalians this year, told Fox News Digital the organization is greatly concerned.

“We are witnessing a spike in the numbers of emaciated women and children visiting the health centers we support,” Dubow said. “It is unacceptable that more than half the population of Somalia will face acute food insecurity by June 2023 if no urgent funding is availed. Famine or no famine, more support is needed to save lives.”

BAIDOA, SOMALIA – NOVEMBER 9: Malnourished Somali baby Adan Macalin Ali, 1, is held by his mother, Hawo Abdi Adan, after being measured at the Danwadaag Mother and Child Health Center, as Somalis struggle to cope with famine conditions due to four failed rainy seasons in a row, and conflict with Islamist Al Qaeda-linked Al-Shabaab rebels, on November 9, 2022 in Baidoa, Somalia. As numbers in need have surged, United Nations and Western relief agencies are warning of famine to come, if there is not an immediate boost of assistance to affected areas. Drought and insecurity have caused the failure of crops and the death of countless camels, cows, and goats, the backbone of this pastoralist economy, resulting in the doubling of displaced people in Baidoa from Al- Shabaab-controlled areas since spring to some 900,000, all in need of food, water and sanitation. (Photo by Scott Peterson/Getty Images)
( (Photo by Scott Peterson/Getty Images))

The timing in May of the Biden administration’s announcement that Americans were putting boots back on the ground after President Trump pulled troops out — the day after the Somali election results — raises suspicion among some.

After all, Somalia has oil. Seismologists claim there are up to 30 billion barrels of it. And American companies reportedly want in.

But the U.S. is playing catch-up to the panda in the room. China has never pulled out of supporting Somalia, instead developing over 80 infrastructure projects such as hospitals and highways.

In return, Somalia has become the first East African nation to establish diplomatic relations with China, with Beijing creating a special envoy for the Horn of Africa. No such person has been appointed in Washington. Beijing regards Somalia, situated close to the vital Suez Canal, and with the longest coastline in Africa, as an essential part of its Belt and Road trade route.

A view of damage after a suicide car blast targeted a security convoy in Mogadishu, Somalia, Jan 12, 2022.
(Sadak Mohamed/Anadolu Agency via Getty Images)

Vastly different views are being pushed from Washington and Beijing.

“We see African countries, including Somalia, as partners in global and regional priorities,” a State Department spokesperson told Fox News Digital this week. “We remain committed to supporting Somali and African Union-led efforts to counter the threat posed by al-Shabab and other terrorist groups.”

China’s special envoy for the region, Xue Bing, claimed “Chinese wisdom” proposes foreign nations such as the U.S. should get out, urging the Somali government to “get rid of external intervention. We respect and support regional countries to settle their differences independently.”

And in the middle of the geopolitical fight is the aggressive cancer that is the terror group al-Shabab. It’s arguably even more dangerous because, thanks to a sustained offensive from the country’s new government, the militants’ backs are against the wall.

“The government offensive is intense, and it’s continuing to gain momentum,” Opperman said. “Shabab is falling back to human shields, back to kidnapping.”

SOMALIA BOMBINGS: AT LEAST 100 KILLED IN TERRORIST ATTACKS BY AL-SHABAB

There are signs that some sectors of Somali society, often quiet in the past, are turning against the terror group, sometimes in a vicious manner. Hiran area Governor Ali Jeyte has promised a reward of $30,000 and an amnesty for “any al-Shabab member who kills a leader in the group” and urged them to cut off the militants’ private parts.

Al-Shabab has become one of the world’s richest terror groups, extorting money out of villagers and operating cash cow roadblocks that allow most people to pass, but at a hefty price. This led Somalia’s President Hassan Mohamud to lash out at this supposed faith-based organization during the recent U.S.-Africa Summit in Washington.

They are “hiding themselves in Islam, which is not true,” Mohamud told delegates. “What they are propagating is not Islam and has nothing to do with Islam. They are a group of mafia, covering themselves with the branding of Islam. If the community stands up, they have no choice but to run away.”

At the request of the Somali government, U.S. Africa Command claimed to have killed 15 al-Shabab operatives in two drone strikes in the past week. U.S. operations, involving some 450 American troops, are helping government forces and the feared Danab Special Forces groups to push al-Shabab back. But the militants still frequently reverse gains, with some villages changing hands multiple times.

Paul Tilsley covers Africa for Fox News Digital. He has experience in 87 countries in producing, reporting, editing, direction, and live, business news feature producing, reporting, and writing for Fox Business, Fox News Channel, CNN, Sky News, BBC and ITN among others. He can be found on Twitter @paultilsley

News - September 27, 2021 0
The 1,250 Celsius degree lava may touch the Atlantic Ocean in the coming hours, likely causing explosions and send clouds of toxic gases over...

‘Fair Value’ $38k Based on Volatility Vs Gold

News - December 27, 2021 0
British police said on Monday they were assessing a video purportedly made by a man who tried to break into a castle where Queen...

News - October 14, 2022 0
More than 5mn households in Britain are set to see their annual mortgage payments increase by an average of £5,100 by the end of...
© 2022 Venture Current is a Flag Media LLC Publication. All Rights Reserved.
VC is part of the FLAG Token rewards network. Clients and partners can use FLAG Tokens for VC products and services.
VC runs 'Automatic' software. Stories posted here come from generic-topic Google news RSS feeds as well as client and partner-approved content.
If a story appears on this page that needs to be deleted due to licensing issues, please message us immediately so we can help you.