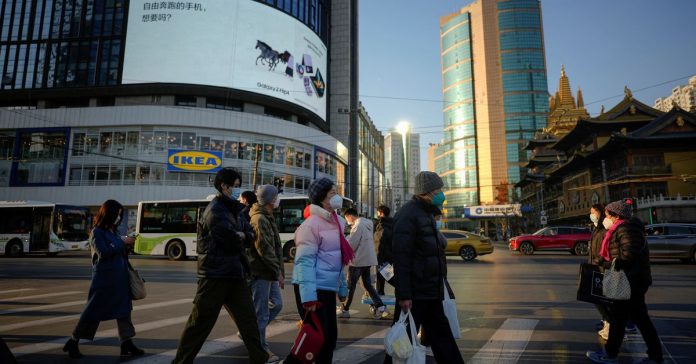 BEIJING, Jan 4 (Reuters) – Global health officials tried to determine the facts of China’s raging COVID-19 outbreak and how to prevent a further spread as the government’s mouthpiece newspaper on Wednesday rallied citizens for a “final victory” over the virus.

China’s axing of its stringent virus curbs last month has unleashed COVID on a 1.4 billion population that has little natural immunity having been shielded from the virus since it emerged in its Wuhan city three years ago.

Funeral homes have reported a spike in demand for their services, hospitals are packed with patients, and international health experts predict at least one million deaths in China this year.

But officially, China has reported a small number of COVID deaths since the policy U-turn and has played down concerns about a disease that it was previously at pains to eradicate through mass lockdowns even as the rest of the world opened up.

“China and the Chinese people will surely win the final victory against the epidemic,” Chinese Communist Party mouthpiece the People’s Daily said in an editorial, rebutting criticism of its tough anti-virus regime that triggered historic protests late last year.

As it now dismantles those restrictions, China has been particularly critical of decisions by some countries to impose a requirement for a COVID test on its citizens, saying they are unreasonable and lack scientific basis.

Japan became the latest country to mandate pre-departure COVID testing for travellers from China, following similar measures by the United States, Britain, South Korea and others.

Health officials from the 27-member European Union are due to meet on Wednesday to discuss a coordinated response to China travel. Most European Union countries favour pre-departure COVID testing for visitors from China.

China, which has been largely shut off from the world since the pandemic began in late 2019, will stop requiring inbound travellers to quarantine from Jan. 8. But it will still demand that arriving passengers get tested before they begin their journeys.

Meanwhile, World Health Organization officials met Chinese scientists on Tuesday amid concern over the accuracy of China’s data on the spread and evolution of its outbreak.

The U.N. agency had invited the scientists to present detailed data on viral sequencing and to share data on hospitalizations, deaths and vaccinations.

The WHO would release information about the talks later, probably at a Wednesday briefing, its spokesperson said. The spokesperson earlier said the agency expected a “detailed discussion” about circulating variants in China, and globally.

Last month, Reuters reported that the WHO had not received data from China on new COVID hospitalisations since Beijing’s policy shift, prompting some health experts to question whether it might be concealing the extent of its outbreak.

But the toll is widely believed to be much higher. British-based health data firm Airfinity has said about 9,000 people in China are probably dying each day from COVID.

There were chaotic scenes at Shanghai’s Zhongshan hospital where patients, many of them elderly, jostled for space on Tuesday in packed halls between makeshift beds where people used oxygen ventilators and got intravenous drips.

With COVID disruptions slowing China’s $17 trillion economy to its lowest growth in nearly half a century, investors are now hoping policymakers will intervene to counter the slide.

China’s yuan hovered at a four-month high against the dollar on Wednesday, after its finance minister pledged to step up fiscal expansion this year, days after the central bank said it would implement more policy support for the economy.

Despite some countries imposing restrictions on Chinese visitors, interest in outbound travel from the world’s most populous country is cranking up, state media reported.

The number of international flights to and from China is still a fraction of pre-COVID levels. The government has said it will increase flights and make it easier for people to travel abroad.

Thailand, a major destination for Chinese tourists, is expecting at least five million Chinese arrivals this year, its tourism authority said on Tuesday.

More than 11 million Chinese tourists visited Thailand in 2019, nearly a third of its total visitors.

But there are already signs that an increase in travel from China could pose problems abroad.

South Korea, which began testing travellers from China for COVID on Monday, said more than a fifth of the test results were positive.

Authorities there were hunting on Wednesday for one Chinese national who tested positive but went missing while awaiting quarantine. The person, who was not identified, could face up to a year in prison or fines of 10 million won ($7,840).

Reporting by Bernard Orr and Liz Lee in Beijing and Brenda Goh in Shanghai, Hyonhee Shin in Seoul and Kantaro Komiya in Tokyo; Writing by John Geddie; Editing by Robert Birsel

News - April 28, 2022 0
With beats on every line item and guidance coming in better than expected, there should be no doubt Qualcomm is firing on all cylinders. Source

News - May 27, 2022 0
Health Minister Diouf Sarr was relieved of his duties Thursday, and has been replaced by a senior ministry official, Marie Khemesse Ngom Ndiaye, according...

News - January 15, 2022 0
Law-enforcement officials in Colleyville, Texas, were working through a hostage situation Saturday evening at a...

News - January 5, 2022 0
**For previous coverage on COVID variants, watch below. (WJW/AP) — An official with the World Health Organization said a new COVID variant recently detected in...
© 2022 Venture Current is a Flag Media LLC Publication. All Rights Reserved.
VC is part of the FLAG Token rewards network. Clients and partners can use FLAG Tokens for VC products and services.
VC runs 'Automatic' software. Stories posted here come from generic-topic Google news RSS feeds as well as client and partner-approved content.
If a story appears on this page that needs to be deleted due to licensing issues, please message us immediately so we can help you.