Sign up to myFT Daily Digest to be the first to know about Chinese equities news.

In Hong Kong on Friday, the Hang Seng Tech index of China’s largest internet and ecommerce stocks including Tencent and Alibaba dropped as much as 4.5 per cent after state news agency Xinhua announced the law had been passed and would take effect on November 1.

The report gave little detail on the contents of the law but said it would clarify how sensitive personal data could be processed, require internet platforms to establish “robust personal information protection compliance systems” and stressed that companies “must not excessively collect personal information”.

The Hong Kong-traded shares of Alibaba fell more than 2 per cent on Friday after a punishing session in New York overnight.

The Nasdaq Golden Dragon index of large US-listed Chinese stocks closed more than 5 per cent lower on Thursday in New York, dragged down by an almost 7 per cent fall for the ecommerce group founded by Jack Ma. The gauge has fallen almost 10 per cent since Monday, putting it on track for its biggest weekly drop since April.

The sell-off for Chinese tech stocks, brought about by Beijing’s regulatory broadside against industries including gaming and fintech, has taken the index down almost 53 per cent from its peak in February. Tens of billions of dollars have been obliterated from the wealth of tycoons including the Alibaba founder and Tencent’s Pony Ma.

Chinese companies’ use of data has come to the fore since Beijing’s cyber security agency launched a probe into ride-hailing group Didi Chuxing days after it raised more than $4bn in a New York initial public offering in June.

Ping An Healthcare fell more than 15 per cent while Alibaba Health Information Technology dropped more than 13 per cent.

In mainland Chinese markets, liquor makers sold off after local news outlet Caijing reported that an executive at an unnamed spirits producer would attend a regulatory meeting about policing the industry. China has in recent weeks also sought to tackle a culture of heavy post-work drinking.

Kweichow Moutai, the world’s largest liquor company, dropped more than 4 per cent, while rival Luzhou Laojiao shed almost 6 per cent. The CSI 300 index of large Shanghai- and Shenzhen-listed stocks was down 2.4 per cent. 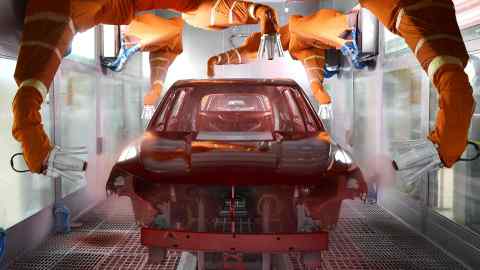 Analysts at Morgan Stanley warned that recent falls for Chinese tech groups could be worsened by investors pulling out of equity funds focused on the country’s stocks, “causing additional difficulties in recapturing substantial inflows in the short term”.

Chinese commodities markets steadied after concerns over a slowdown in the country’s growth prompted a more than 7 per cent fall in iron ore futures on Thursday. Iron ore contracts traded in Dalian edged up about 1 per cent on Friday.

“Clearly we are seeing some further slowdown in China’s economy,” said Mansoor Mohi-uddin, chief economist at Bank of Singapore. He added that on top of outbreaks of the Covid-19 Delta variant in China, this week’s economic readings such as retail sales and industrial production were weaker than expected while credit growth had been “surprisingly slow”.

Your crucial guide to the billions being made and lost in the world of Asia Tech. A curated menu of exclusive news, crisp analysis, smart data and the latest tech buzz from the FT and Nikkei

Mexico Supreme Court rules that abortion is not a crime

News - December 30, 2021 0
The S&P 500 and Dow Jones Industrial Average closed slightly below their all-time highs Thursday as stocks gave up an early gain and turned...

Steals and Deals: How to avoid overspending during the holiday shopping season

News - December 2, 2021 0
LANSING, Mich. (WLNS) – The holiday shopping season is well underway and if you fell like you are spending fast, you’re not alone.It’s easy...