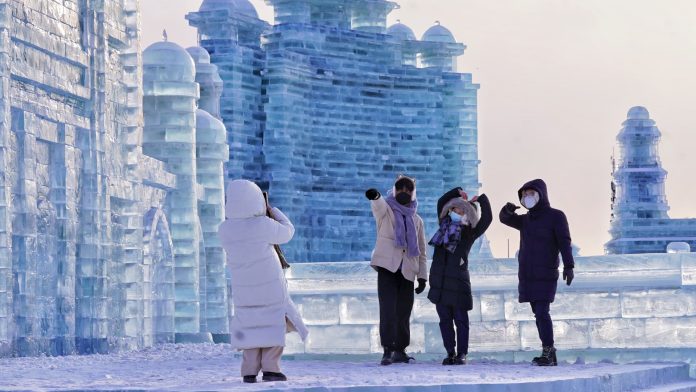 “In late December, customer flow gradually normalized, with a slight upward trend, but [a recovery in] business volume still needs to wait,” he said in Chinese, translated by CNBC.

He expects it will take at least three or four months before revenue can return to normal. For the past six months, revenue had dropped to 30% of typical levels, Chong said. He said Bem Bom Coffee’s first store opened in late 2019, followed by a second store and a coffee academy in August 2021.

China’s retail sales were down slightly for 2022 as of November, official data showed. Consumption has lagged overall economic growth since the pandemic began nearly three years ago.

For the year ahead, Bain partner Derek Deng kept a lid on expectations. “The hope is we at least get back to the first quarter of 2022 level,” he said, noting that was just before the Shanghai lockdown.

Retail sales for the first three months of 2022 were up by about 3.3% from a year ago, but had slowed to a decline of 0.7% for the first half of the year, according to Wind Information.

A return to 2021 — when retail sales rebounded by 12.5%— would be an optimistic scenario, Deng said. “I don’t think people are seeing that as sort of the base case, mostly because the macro factors are actually less favorable compared to 2021.”

The bulk of Chinese household wealth is tied up in real estate, a one-time hot market that’s slumped in the last year. Mainland Chinese stock markets dropped in 2022 for the first time in four years. Exports, a driver of China’s growth, have started to decline in the last few months as global demand wanes.

“I think that has also impact on people’s perceptions on their disposable income, or whether they need to save to weather all those uncertainties,” he said.

Hopes for a travel rebound

Analysts are closely watching the upcoming Lunar New Year holiday for indications on consumer sentiment. The travel season for China’s big holiday runs this year from around Jan. 7 to Feb. 15. — with about 2.1 billion trips expected, according to official estimates.

That’s twice what it was last year, and 70% of 2019 levels, China’s Ministry of Transport said Friday. It noted most of the trips will likely be for visiting family, while just 10% will be for leisure or business travel.

This year, many more Chinese will finally be able to travel overseas. The country is restoring the ability of Chinese citizens to go abroad for leisure, after tightly controlling the mainland borders for almost three years. On Sunday, China also formally removed quarantine requirements for inbound travelers.

However, Chinese travel overseas is unlikely to pick up until around the next public holiday in early April, said Chen Xin, head of China leisure and transport research at UBS Securities.

By that time, people will have been able to process their passport applications, while the number of international flights may have recovered to 50% or 60% of 2019 levels, Chen said. He added that measures such as pre-flight virus testing requirements to visit certain countries could be relaxed in a few months.

Within China, Chen expects travel will get another boost after February when business trips pick up, bringing hotel business back to 2019 levels by the end of the year. That’s based on an industry metric that measures revenue per available room.

Not everyone is going out

China’s big city streets are getting busier as the first wave of infections passes.

But it’s mostly younger and middle-aged people who are out and about again, UBS’s Chen said, noting that older people might be more cautious about venturing out.

After a gradual rollback in Covid controls, Chinese authorities last month suddenly did away with the bulk of the country’s virus testing and contact tracing measures. However, vaccination rates for China’s elderly have been relatively low. Only domestically made vaccines are generally available in China.

Bain’s Deng is also watching whether consumers will start to go out more. During the first three quarters of 2022, about 56% of consumer spending was at home — the reverse of the pre-pandemic trend, he said.

If the share of out-of-home spending can go up by even a few percentage points, that will affect how malls and restaurants consider their business strategy, especially for delivery services, Deng said.

In the last 18 months, Chinese e-commerce giant JD.com shortened the delivery window for many products from next-day to just one hour. That’s through its partnership with Dada, now majority owned by JD.

Figures from the company showed that for the Dec. 16 to Jan. 1 period, the one-hour delivery platform saw sales for vegetables, beef and mutton roughly double from a year ago. Sales of refrigerators soared by 700%, while flat-screen TV sales jumped tenfold from a year ago, according to the data.

News - April 19, 2022 0
(Reuters) - The Ukrainian port city of Mariupol could fall to Russian forces within days, a European official said on Tuesday, saying it may...

News - September 2, 2021 0
We may have called the top too soon.What's happening: US home prices rose 18.6% in June compared to one year earlier and 16.8% versus...
© 2022 Venture Current is a Flag Media LLC Publication. All Rights Reserved.
VC is part of the FLAG Token rewards network. Clients and partners can use FLAG Tokens for VC products and services.
VC runs 'Automatic' software. Stories posted here come from generic-topic Google news RSS feeds as well as client and partner-approved content.
If a story appears on this page that needs to be deleted due to licensing issues, please message us immediately so we can help you.