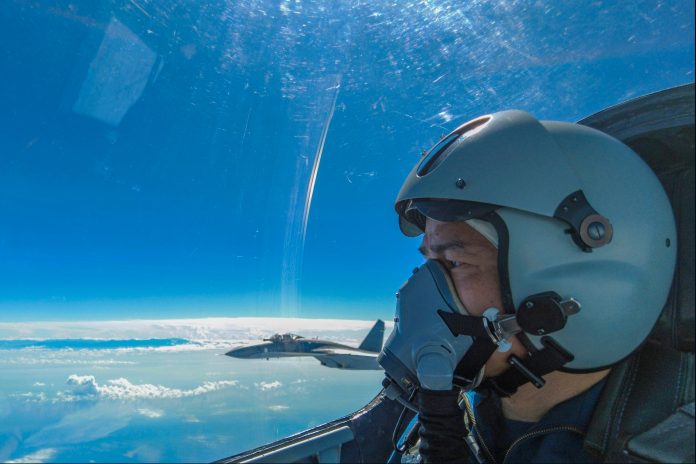 Nearly a dozen Chinese military aircraft and three naval ships were detected near Taiwan on Monday, amid increased tensions, according to Taiwan’s Ministry of National Defense.

In this photo released by Xinhua News Agency, an air force pilot from the Eastern Theater Command of the Chinese People’s Liberation Army (PLA) looks as they conduct a joint combat training exercises around the Taiwan Island on Sunday, Aug. 7, 2022.
(Wang Xinchao/Xinhua via AP)

It added that seven of the detected aircraft crossed over the median line of the Taiwan Strait, which is an unofficial buffer zone separating Taiwan from China.

This is the second consecutive day – and third day within a week – that China has crossed over the median line of the Taiwan Strait.

On Jan. 8, dozens of Chinese aircraft and four ships were detected near Taiwan, with at least 28 aircraft crossing the median line.

As for the incident on Monday, no statement from China had been made.

Taiwan’s Ministry of National Defense said its armed forces are monitoring the situation and tasked aircraft, Navy vessels and land-based missile systems with responding to the activities.STATE DEPARTMENT CALLS ON CHINA TO BE MORE TRANSPARENT ON CURRENT COVID-19 SURGE, VIRUS’ ORIGINS

In August, tensions grew after then-Speaker of the House Nancy Pelosi visited Taiwan. In recent months, China has picked up the number of combat drills around the island in recent months.

Chinese President Xi Jinping told President Biden at the November G20 summit in Bali that the Taiwan question was the “very core of China’s core interests” and the “first red line” in bilateral ties.

President Biden said after that meeting that he does “not think there’s any imminent attempt on the part of China to invade Taiwan.”

News - January 26, 2022 0
The US and Nato told Moscow they were committed to keeping the transatlantic alliance open to new members, rebuffing a central Russian security demand...

News - May 23, 2022 0
Ambassador Katherine Tai, the U.S. Trade Representative, recently testified to Congress that trade can be a force for good, by growing the middle class...

News - September 5, 2021 0
“Out of adversity comes opportunity” … this famous saying by American polymath Benjamin Franklin fits well in the context of Covid-19.The pandemic, which upended...
© 2022 Venture Current is a Flag Media LLC Publication. All Rights Reserved.
VC is part of the FLAG Token rewards network. Clients and partners can use FLAG Tokens for VC products and services.
VC runs 'Automatic' software. Stories posted here come from generic-topic Google news RSS feeds as well as client and partner-approved content.
If a story appears on this page that needs to be deleted due to licensing issues, please message us immediately so we can help you.