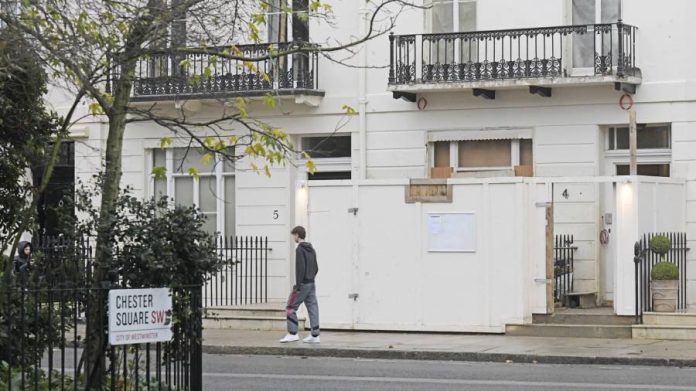 A company linked to the husband of Tory party peer Baroness Michelle Mone paid nearly £10mn for a townhouse in one of London’s most exclusive areas in late 2020, months after a medical goods supplier with connections to the couple won more than £200mn worth of government contracts.

A company called Chester Ventures, incorporated in the Isle of Man in early December 2020, paid £9.25mn for 4 Chester Square in Belgravia later that month, according to Land Registry documents.

A spokesperson for the Knox group of companies, founded and chaired by Mone’s husband Douglas Barrowman, confirmed that “Chester Ventures is a property development company within the group. 4 Chester Square was purchased in 2020 for redevelopment using group internal resources and external banking facilities.”

The spokesperson added the property is not owned personally by either multi-millionaire investor Barrowman or Mone, founder of lingerie brand Ultimo.

The Knox group of companies provides wealth planning, investment sourcing and fiduciary services to corporate and personal clients, according to its website, which lists an office in the Isle of Man.

Chester Ventures bought 4 Chester Square as an investment and will sell it on following a refurbishment that is currently underway, said the Knox group.

Details of the purchase come amid scrutiny of Mone following allegations about the peer’s links to PPE Medpro, a company that won more than £200mn of government contracts to supply personal protective equipment including surgical gowns during the Covid-19 pandemic without a competitive tender after she lobbied ministers.

The purchase of 4 Chester Square completed on December 31 2020, six months after PPE Medpro was awarded two contracts, worth £80mn and £122mn, to supply PPE to the NHS.

Barrowman, who has previously distanced himself from PPE Medpro and denied any wrongdoing, received £65mn in profits from the company in 2020, according to documents seen by the Financial Times.

A sum of £28.8mn was later transferred to a trust whose beneficiaries were Mone and her children.

Last year, after Mone denied any involvement with PPE Medpro, it emerged she had been the “source of referral” between the government and PPE Medpro, helping it get a place in the government’s “high-priority lane” for PPE procurement.

In April the National Crime Agency raided multiple properties connected to Mone and Barrowman as part of an investigation into PPE Medpro.

Last week, the government launched legal proceedings against the company seeking to recover the cost of millions of surgical gowns which were deemed unfit for purpose and never used.

PPE Medpro has said it would “rigorously defend” itself against the “cynical” legal action, stating the kit was not used because the government had over-ordered equipment with a short lifespan.

It said the gowns were delivered on time, with the correct quality standards, at 50 per cent of the price the government had been paying previously.

Mone, who denies any wrongdoing, this month announced she was taking a leave of absence from the House of Lords to “clear her name”.

The title of 4 Chester Square is registered to Chester Ventures, whose sole corporate director is Quantum Directors. The directors of Quantum are Anthony Page and Rebecca Duke, both of whom are employed by the Knox group.

Page is also a director and the sole registered owner of PPE Medpro in the UK.

News - May 26, 2022 0
One of Silicon Valley's most successful venture capital firms doesn't see the economy bouncing back anytime soon and is warning portfolio companies to tighten...

News - September 21, 2021 0
CNBC's Jim Cramer said Tuesday investors should put Airbnb, Uber and DoorDash on their "shopping list," even as he expects the broader market to...

News - April 3, 2022 0
The EU is preparing to introduce more sanctions against Moscow after reports of atrocities emerged in the wake of Russia’s military retreat from the...
© 2022 Venture Current is a Flag Media LLC Publication. All Rights Reserved.
VC is part of the FLAG Token rewards network. Clients and partners can use FLAG Tokens for VC products and services.
VC runs 'Automatic' software. Stories posted here come from generic-topic Google news RSS feeds as well as client and partner-approved content.
If a story appears on this page that needs to be deleted due to licensing issues, please message us immediately so we can help you.