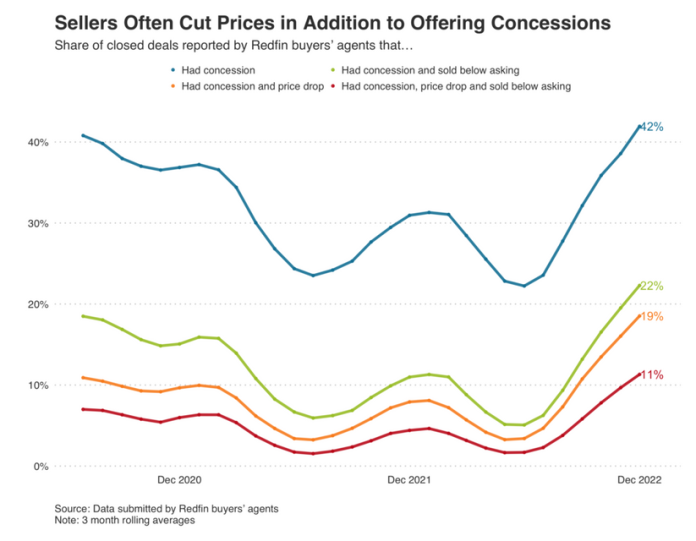 Some home sellers are finally accepting the writing on the wall, and offering concessions to home buyers as demand remains weak in the housing market.

According to a new report from Redfin
RDFN,
,
approximately 42% of homes sold in the fourth quarter of 2022 came with concessions. In contrast, over the same period in 2021, only about 30% of homes sold came with deals.

“‘Sellers realize they’re not going to get $80,000 over the asking price like their neighbor did last year.’”

Concessions refer to tactics sellers use to reduce the total cost of purchasing a home for a buyer. That includes providing money for repairs, or covering closing costs, or mortgage-rate buy-downs. It doesn’t refer to a cut in the list price.

With the 30-year mortgage rate at 6.42%, buyers are finding it too expensive to afford a home. Sales of existing homes have plunged, falling for 10 months straight.

“Concessions have made a comeback as rising mortgage rates, inflation and economic uncertainty have dampened homebuying demand,” Redfin stated in the report, “giving the buyers who remain in the market increased negotiating power.”

The sharp rise in concessions offered can be seen in the chart from Redfin below:

Concessions were most commonly offered by buyers in San Diego, followed by Phoenix, Portland, Las Vegas, and Denver.

In San Diego, 73% of homes sold in the fourth quarter came with concessions. Phoenix had about 63% of sellers offering concessions.

Concessions were an increasingly popular tactic among home sellers in pandemic boomtowns, which has seen demand wane.

For instance, Phoenix saw the biggest jump in the share of sellers giving concessions to buyers, at 62.9% in the fourth quarter. That’s up from 33.2% from a year ago.

Where concessions were least common

Concessions were least common compared to a year ago in New York, where only 13.4% of home sellers gave concessions to buyers, followed by San Jose, Boston, and Philadelphia.

Other cities were concessions dropped significantly include Austin, and Chicago. In Austin, 38.1% of sellers gave concessions to buyers in 2021. In 2022, that figure dropped to 33.3%.

“Buyers are asking sellers for things that were unheard of during the past few years,” Van Welborn, a Redfin real-estate agent in Phoenix, said.

He recounted helping a buyer negotiate $10,000 in credits for a new roof and other repairs. The homeowner had also agreed to sell for less than their asking price.

“It took a while, but seller expectations are coming back down to earth. Concessions were common before the pandemic, and we may be returning to that norm,” said Welborn. “Sellers realize they’re not going to get $80,000 over the asking price like their neighbor did last year.”

Got thoughts on the housing market? Write to MarketWatch reporter Aarthi Swaminathan at aarthi@marketwatch.com

News - November 1, 2021 0
After adding a new Driving Focus mode in iOS 15 designed to keep your eyes on the road, Apple is reportedly looking to add...

News - December 21, 2021 0
found herself obsessively labeling items around her...

Congress’s Turn to Step Up on Ukraine

News - December 21, 2022 0
Eight teenage girls who met through social media were charged with the murder of a homeless man in Toronto on Sunday, police said. The...
© 2022 Venture Current is a Flag Media LLC Publication. All Rights Reserved.
VC is part of the FLAG Token rewards network. Clients and partners can use FLAG Tokens for VC products and services.
VC runs 'Automatic' software. Stories posted here come from generic-topic Google news RSS feeds as well as client and partner-approved content.
If a story appears on this page that needs to be deleted due to licensing issues, please message us immediately so we can help you.