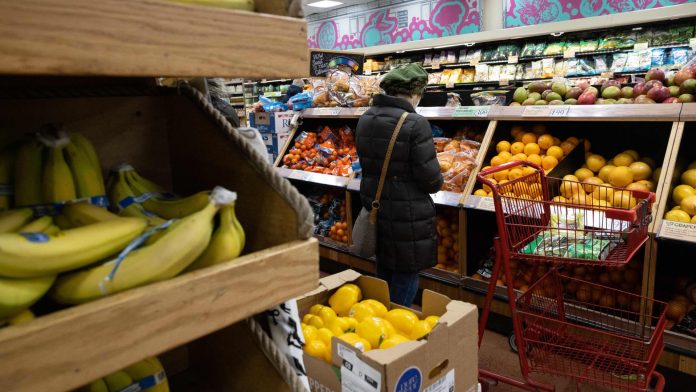 Inflation closed out 2022 in a modest retreat, with consumer prices in December posting their biggest monthly decline since early in the pandemic, the Labor Department reported Thursday.

The consumer price index, which measures the cost of a broad basket of goods and services, fell 0.1% for the month, in line with the Dow Jones estimate. That equated to the largest month-over-month decrease since April 2020, as much of the country was in lockdown to combat Covid.

Even with the decline, headline CPI rose 6.5% from a year ago, highlighting the persistent burden that the rising cost of living has placed on U.S. households. However, that was the smallest annual increase since October 2021.

Excluding volatile food and energy prices, co-called core CPI rose 0.3%, also meeting expectations. Core was up 5.7% from a year ago, once again in line.

A steep drop in gasoline was responsible for most of the monthly decline. Prices at the pump tumbled 9.4% for the month and are now down 1.5% from a year ago after surging past $5 a gallon in mid-2022.

Fuel oil slid 16.6% for the month, also contributing to a total 4.5% decline in the energy index.

Food prices increased 0.3% in December while shelter also saw another sharp gain up 0.8% for the month and now 7.5% higher from a year ago. Shelter accounts for about one-third of the total CPI index.

Used vehicle prices, also an important initial driver of inflation, were off 2.5% for the month and are now down 8.8% year over year. Medical care services increased 0.1% after dropping for two straight months, while apparel prices rose 0.5% and transportation services were up 0.2% and are still 14.6% higher from a year ago. However, airline fares fell 3.1% for the month though are still up 28.5% from a year ago.

Markets reacted little to the news, with futures tied to the Dow Jones Industrial Average up modestly and Treasury yields down across most maturities.

Both annual increases remain well above the Federal Reserve’s 2% target, but have been consistently moving lower.

“Inflation is quickly moderating. Obviously, it’s still painfully high, but it’s quickly moving in the right direction,” said Mark Zandi, chief economist at Moody’s Analytics. “I see nothing but good news in the report except for the top-line number: 6.5% is way too high.”

CPI is the most closely watched inflation gauge as it takes into account moves in everything from a gallon of gas to a dozen eggs and the cost of airline tickets.

The Federal Reserve prefers a different gauge that adjusts for changes in consumer behavior. However, the central bank takes in a broad array of information when measuring inflation, with CPI being part of the puzzle.

Markets are watching the Fed’s moves closely as officials battle against inflation that at its peak was the highest in 41 years. Supply chain bottlenecks, the war in Ukraine, and trillions in fiscal and monetary stimulus helped contribute to surging prices that spanned across most areas of the economy.

Policymakers are weighing how much further they need to go with interest rate hikes used to slow the economy and tame inflation. The Fed so far has raised its benchmark borrowing rate 4.25 percentage points to its highest level in 15 years. Officials have indicated the rate is likely to exceed 5% before they can step back to see the impact of the policy tightening.

Following the CPI report, market pricing pointed toward an increased probability that the Fed would approve a 0.25 percentage point rate increase on Feb. 1. That would represent another step down for the central bank after it approved four consecutive 0.75 percentage point hikes last year before slowing down to a 0.5-point increase in December.

News - December 13, 2022 0
Consumer prices rose by 7.1% in November compared to last year, according to a Tuesday report from the U.S. Bureau of Labor Statistics. This...

News - June 20, 2022 0
© 2022 Venture Current is a Flag Media LLC Publication. All Rights Reserved.
VC is part of the FLAG Token rewards network. Clients and partners can use FLAG Tokens for VC products and services.
VC runs 'Automatic' software. Stories posted here come from generic-topic Google news RSS feeds as well as client and partner-approved content.
If a story appears on this page that needs to be deleted due to licensing issues, please message us immediately so we can help you.