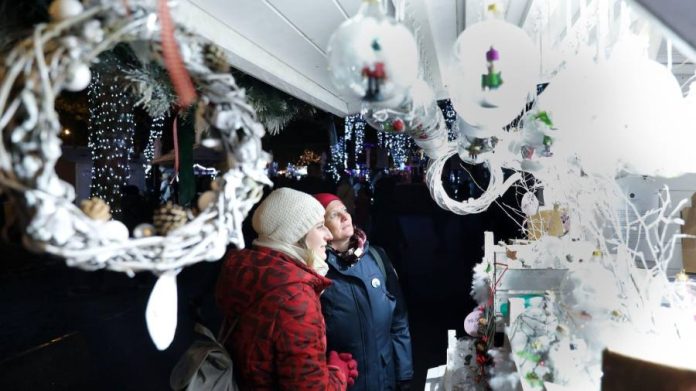 Ivo Božić, a stallholder selling trinkets at the Christmas market in Croatia’s capital Zagreb, is used to handling multiple currencies and thinks the transition will go without hitches when the country adopts the euro on January 1.

“If you deal with tourists, you most certainly have several currencies in your head,” said Božić, whose wares include puppets in colourful costumes, fridge magnets with Christmas patterns and handmade jewellery. “I have bank accounts in multiple currencies and I guess I’ll just merge them next year,” he added. “Some of my stuff I’ve bought for euros anyway.”

When Croatia next week becomes the 20th country to use the euro it will be a milestone for a nation of 4mn people that has long strived for closer integration with the rest of the EU. Croatia will also join Europe’s border-free Schengen zone.

The switch from the kuna should bring benefits, say economists, because Croatia relies on the single currency area for more than half its external trade, two-thirds of foreign direct investment and roughly 70 per cent of its tourists.

It will also be a symbolic boost for European unity just as Russia is trying to disrupt the bloc’s opposition to its war in Ukraine. European Central Bank president Christine Lagarde called the addition “a vote of confidence for the euro area” and said Croatia would benefit from the “shield of the euro”.

Adopting the euro is in some ways a natural progression for a country where the single currency already accounts for half of its total bank deposits and 60 per cent of overall loans — more than any country outside the eurozone.

“Croatia is the country that stands to profit the most from entry into the eurozone,” as it would eliminate foreign currency risk, said Boris Vujčić, governor of the Croatian central bank. “Foreign exchange risk in Croatia is the highest.”

“When your currency depreciates against the euro it means your debt is worth more,” Vujčić said in an interview with the Financial Times. “So your borrowing costs as a country are higher to reflect this risk.”

Croatia has €27bn of foreign exchange reserves — 40 per cent of its gross domestic product — to cover this, he said, although joining the euro meant it would “not need anywhere near as much.”

The benefits of the euro are “most visible during a crisis”, Vujčić stressed, pointing to recent selling pressure on the Hungarian forint, Polish zloty and Czech krona. “They had to intervene and increase interest rates a lot and their 10-year government bond yields are now 5 to 8.5 per cent,” he said.

In contrast, Croatia’s 10-year bond yield was about 3.5 per cent, lower than Italy and Greece and just above Spain’s, even though it has yet to join the euro. “There’s a huge credibility effect,” said Vujčić, who will get to vote on ECB policy decisions from January after already joining meetings as an observer.

Vujčić recalled how prices soared out of control in the former Yugoslavia and then Croatia during the late 1980s and early 1990s, suggesting he would take a hawkish stance to aggressively tame the price rises that are worrying Europe’s policymakers.

“I have seen the beast and I know how the beast behaves if not checked in the right way at the right moment,” he said.

He admitted to a risk that Croatian consumers would blame introducing the euro for high inflation, which last month hit 13.5 per cent. Yet, on average, countries that have adopted the euro have experienced only a 0.2 to 0.4 percentage point rise in inflation, albeit in periods of lower price growth.

To improve pricing transparency, shops in Croatia have had to display the cost of goods in both kuna and euro since September and will continue to do so until the end of 2023. Businesses have been threatened with fines it they seek to take advantage of the switch to raise prices.

“The handover is coming at a time when inflation is already high, so the starting position is that Croatian consumers are very price sensitive,” said Michał Seńczuk, chief executive of Studenac, one of Croatia’s leading grocery chains. “That makes it hard for any merchant to impose unjustified price increases because, if you do, shoppers will go to your competitors.”

The switch has been a logistical challenge for retailers and the authorities. Studenac had to print and display 5mn new price labels, while his staff have had to explain to confused customers that it could not accept euros until January 1, after which both currencies will be used in parallel for two weeks.

Seńczuk predicted that as well as boosting tourism, having the euro would make Croatia “more attractive to foreign buyers looking for second homes, either for summer vacations or for the milder winters we have here.”

The central bank, meanwhile, has brought in the army to store and guard some 40 per cent of kuna coins that it expects to be exchanged for euros.

“That’s almost the weight of the Eiffel Tower,” said Vujčić. “We’ll sell it as metal after three years and then the army can put their tanks or armoured vehicles [back] into storage space.”

News - December 26, 2021 0
Pfizer's Paxlovid is supposed to arrive in Israel as early as Thursday. Source

News - April 10, 2022 0
NEW YORK (AP) — With the Russian military in retreat from around Kyiv and facing condemnation for brutal tactics, harsh political repression at home...

News - December 3, 2021 0
New stock listings in Hong Kong have slid this year, making it an exception across global markets as concerns persist over the outlook for...

Indonesia export ban will not include crude palm oil – sources

News - September 5, 2021 0
Brazilian economy updatesSign up to myFT Daily Digest to be the first to know about Brazilian economy news. Brazil has suspended beef exports to China,...
© 2022 Venture Current is a Flag Media LLC Publication. All Rights Reserved.
VC is part of the FLAG Token rewards network. Clients and partners can use FLAG Tokens for VC products and services.
VC runs 'Automatic' software. Stories posted here come from generic-topic Google news RSS feeds as well as client and partner-approved content.
If a story appears on this page that needs to be deleted due to licensing issues, please message us immediately so we can help you.