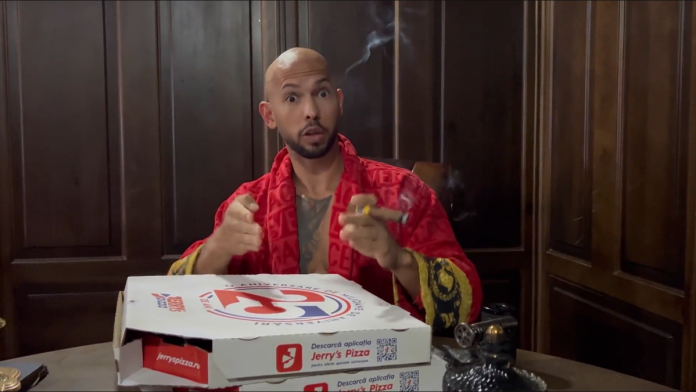 Sign up to our free US Evening Headlines email

The 36-year-old former kickboxer, who gained infamy for his misogynist views, was apprehended by Romanian police after they descended on a villa where he was staying with his brother on Thursday.

It has been widely speculated on social media that the arrest may have never happened if he had not posted a clapback video to mock Ms Thunberg on Twitter.

Romania’s Directorate for Investigating Organised Crime and Terrorism, that had been waiting for nine months for the Tate brothers to return to Romania, mobilised forces and descended upon their villa after learning they were in the country through their social media posts, sources close to the investigation told Romanian outlet Gandul.

“Romanian authorities needed proof that Andrew Tate was in the country so they reportedly used his social media posts,” tweeted civil rights attorney Alejandra Caraballo, sharing a screenshot of Mr Tate’s video from the day before.

“His ridiculous video yesterday featured a pizza from a Romanian pizza chain, Jerry’s Pizza, confirming he was in the country.”

However, in an interview with the Washington Post, Ramona Bolla, a spokeswoman for the Directorate for Investigating Organised Crime and Terrorism, denied that the pizza boxes in the Twitter video played a part in Mr Tate’s arrest, saying, “it was a hard job gathering all the evidence”.

It began after Mr Tate attempted to mock Ms Thunberg and tagged the climate activist in a Twitter post, asking for her email address so he could “send a complete list of my car collection and their respective enormous emissions”.

The following day, the climate activist responded with a tweet of her own, replying, “Yes, please do enlighten me. email me at smalldi***energy@getalife.com.”

The exchange quickly went viral, with Ms Thunberg’s post garnering millions of likes, and inspired a number of trending topics.

Mr Tate hit back by sharing a response video, telling Ms Thunberg, a Nobel Prize nominee and Time person of the year, to “get a life”.

In the video, Mr Tate smoked a cigar in a robe and a person off-camera gave him a stack of pizza boxes from the Romanian pizza chain, Jerry’s Pizza. He tried to joke about refusing to recycle the boxes to taunt Ms Thunberg.

But Ms Thunberg had the last laugh, posting a tweet following Mr Tate’s arrest saying: “this is what happens when you don’t recycle your pizza boxes.”

The Tate brothers have been under criminal investigation since April. They were detained alongside two Romanian suspects.

“The four suspects … appear to have created an organised crime group with the purpose of recruiting, housing and exploiting women by forcing them to create pornographic content meant to be seen on specialised websites for a cost,” prosecutors said.

The former kickboxer gained a large following of men online, and has been banned from various social media sites, for his aggressive and oftentimes misogynistic views, including that women should “shut the f**k up, have kids, sit at home, be quiet and make coffee”.

In 2016, he was booted out from the reality TV show Big Brother, after a video emerged of him hitting a woman with a belt, and a second clip showed him telling the woman to count the bruises he had left on her body.

News - November 2, 2021 0
In a move probably even more significant than the corporate rate increase, the deal will revamp global taxing authority to grant more taxable revenue...

News - June 22, 2022 0
The UK’s main teaching unions are threatening strike action this autumn if the government does not agree to an inflation-busting 12 per cent pay...

News - October 5, 2022 0
Melinda French Gates wants to shake up the tech industry, starting in Silicon Valley.The billionaire philanthropist told Fortune this week that the goal of...

News - January 8, 2022 0
The former intelligence chief of Kazakhstan, a two-time former prime minister, was arrested on suspicion of treason amid violence and unrest in the country,...
© 2022 Venture Current is a Flag Media LLC Publication. All Rights Reserved.
VC is part of the FLAG Token rewards network. Clients and partners can use FLAG Tokens for VC products and services.
VC runs 'Automatic' software. Stories posted here come from generic-topic Google news RSS feeds as well as client and partner-approved content.
If a story appears on this page that needs to be deleted due to licensing issues, please message us immediately so we can help you.